With a handful of weighty storylines, “Disconnect” can be a lot to digest, but thanks to impeccable transitions, well-calculated story overlap, and a congealing tone, the film doesn’t feel like a sampling of stories, rather a look inside a well-developed world.

“Disconnect” highlights three scenarios, all with connectivity at the core. Kyle (Max Thieriot) is an 18-year-old kid making money by performing on an adult-only website. When journalist Nina Dunham (Andrea Riseborough) stumbles upon his page, she sees his unique story as the ideal expose. Jason (Jason Dixon) and his buddy Frye (Aviad Bernstein) are your typical high school kids, honoring the social ladder and addicted to Facebook. The pair gets a kick out of bullying class loner, Ben Boyd (Jonah Bobo), by creating a fake profile and convincing Ben that a girl has a crush on him. Then there’s Cindy and Derek (Paula Patton and Alexander Skarsgård), a couple targeted by an identity thief eager to exploit their passwords, bank accounts, and deepest secrets.

Director Henry Alex Rubin doesn’t waste a second, pulling you right in using a single shot to follow Kyle through his home. The place is packed with kids who seem fairly typical and in good spirits, but then comes the reveal – the building is actually a teen-driven online porn operation. But still, Kyle clearly feels good about his work and it’s no wonder; he’s particularly nice to look at and quite the charmer. While you’re remorsefully admiring Kyle for being the best of the best, when Nina steps in to offer him a way out, you’re presented with a surprisingly conflicting scenario. Clearly the right thing to do is to help Kyle live a more noble life, but he’s happy and really is being taken care of by his boss. There are glimmers that suggest Kyle isn’t the brightest of the bunch and every now and then Thieriot loses his charm and feels more like a threat, but the chemistry between him and Riseborough is powerful enough throughout that their scenario forces you to juggle all the various potential resolutions at once, hoping both can wind up having what they want while also knowing it’s just not possible.

Skarsgård and Patton’s segment is the slower of the bunch, but the very real threat of having your identity stolen keeps you curious. It’s structured as more of a slow burn, which just doesn’t pair well with segments that are tense from beginning to end. For the large majority of the film, Cindy and Derek are slowly boiling over. Cindy’s at home chatting away on a bereavement website while Derek’s on a business trip gambling online. Even when the two come together, it’s a lot of drab, passive aggressive behavior. Having recently lost their child, not only are they both grieving, but their relationship has turned fairly sour because of it. Everyone in this film is going through tough times; Cindy and Derek are the only ones that feel as though they’ve had the life sucked out of them because of it. However, even after an abundance of moping, that storyline achieves quite the climax.

Last up is the most disconcerting element of “Disconnect.” You see the outcome of Ben versus Jason and Frye coming from miles away, but again, bullying is something that’s so real and happening so often that the fact that it feels familiar only enhances the impending doom, and when that doom finally hits, Rubin makes an incredibly bold visual choice, making that portion of the film even more unforgettable. But what really puts this segment on top are the performances. Frank Grillo strikes an enchanting balance between tough and loving father, and Jason Bateman reminds us he’s got an exceptional emotional range, but the biggest winner here is Ford. For Kyle to be so deeply in the wrong and Ford still get the audience to root for him to come out on top is an exceptional achievement.

Making “Disconnect” an even more impactful experience is how well woven the narratives are. There are some character crossovers, one of the most effective of which is Grillo popping up next to Skarsgård and Patton, but even if that wasn’t the case, Rubin and writer Andrew Stern still manage to make each different scenario unite to feel like one. Each portion has its own defining trait – Skarsgård and Patton’s shows off a greyer color palate, Thieriot and Riseborough’s benefits from bold music cues and a degree romance, and Ford’s rocks a playful high school vibe while also being exceedingly dark – but they also all have enough in common to make it a cohesive experience.

“Disconnect” can tread into overt message movie territory and has a small handful of unsuccessful heavy-handed moments, but the piece is so enthralling and entertaining, you power through it, making that nearly two hour running time feel like far less. 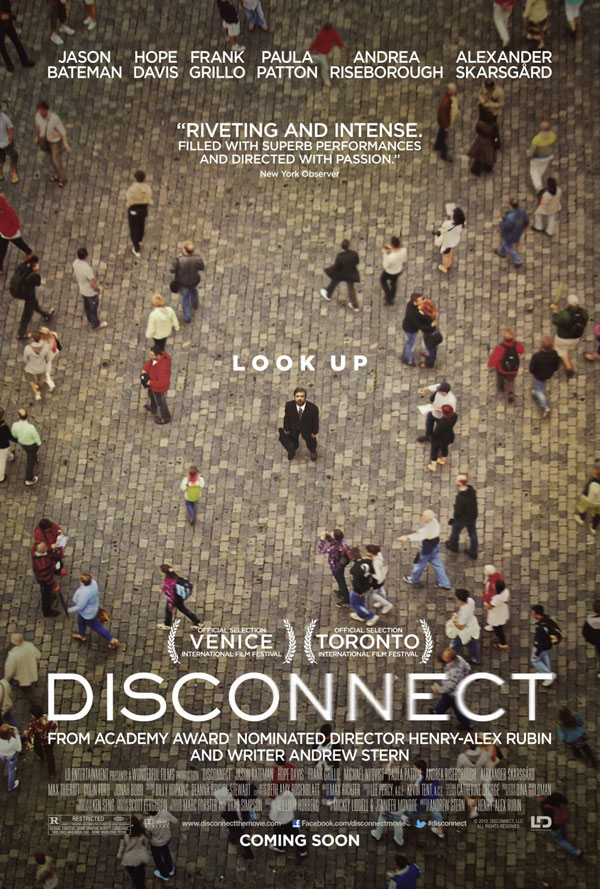