How did you approach directing this film?

Tom Elkins: Well, it was a balance becasue you have this very compelling story…that is very historical in nature, you know? In terms of the history of the land and slavery and the characters that are all historically based–the station master and so on and so forth. [Those elements were] mixed in with this very scary ghost story and it was a balance because I was trying to make sure I…was being true to a story that was historically-based and rich in character but also trying to have a scary movie at the same time that was able to affect the audience in a horrifying way. So approaching the movie from that point of view was a great challenge, a good challenge.

What was it like to work with the actors in this film?

Tom Elkins: It was great. They were all fantastic. And, if you’ve seen it, you can kind of tell…we got great performances from, obviously, Abigail Spencer, Katee Sackhoff, Chad Michael Murray, Emily Alyn Lind, all down the line. They were very, very good. They worked extremely hard and they were all very dedicated to the material and I think comes through in the performances. They were all great to work with.

There’s going to be a lot of deleted scenes on the DVD. Were there any you wish made it into the final cut of the film?

Tom Elkins: Well, you know…it’s a balance because I think the best version of the movie is the one that we have, but the scenes that we took out were good scenes…I wouldn’t change the way the movie was right now. I think taking those scenes out was probably the right choice, even though those scenes on their own were very strong and the performances were all good in them. It’s just at the end of the day when you’re editing the movie, you realize…when a movie goes into post-production, it starts to kind of take on a life of its own and the movie kind of speaks to you tells you what it wants to be. Sometimes the scenes that you shot don’t always fit that mold anymore based on how the movie progresses as you’re editing it.

It’s not that those scenes don’t belong in the movie, because, like I said, they’re very strong on their own and they fit in a different version of the movie. The movie that we needed to make at this…length and style that we went with, it was just better for the pacing…to take them out…I made the very conscious decision to put in a lot of those deleted scenes [as extras on the DVD] because I believe they’re very strong and I think they provide a window into a different version of the movie that might have existed and I think audiences enjoy that kind of thing.

This series of films is based on the true life story of the Wyrick family. What do you think their story has added to the horror genre in general?

Tom Elkins: The thing that’s unique about “The Haunting in Connecticut 2” is that it’s full of heart and I think that’s unusual for scary movies today. The way we approached it was that we were very deliberate with the sentimentality of the movie. We felt that this story of the Wyricks–and the Wyricks are a wonderful family; I got to know them and have become friends with Lisa Wyrick and she’s a wonderful lady–that…is a true ghost story…but then…when you meet them, you realize what sweet, genuine people they are. As a director, that drives you to really tell their story in a compelling, scary but also heartfelt way and that reflects the characters and the nice people that they are.

What it adds to the horror genre–well, it explores the property. It explores the history of the land and digs deep into historical events that I think are unique to this genre. The approach we took, being very deliberate about the mythology and really understanding not just that these are scary ghosts in the woods, but that they have a story behind them, and in fact, in our movie, a love story. I think that made the movie quite a bit richer and I think that’s what sets us apart a little bit and that’s one of the things that we’re really excited about.

Will there be another “Haunting in Connecticut”? 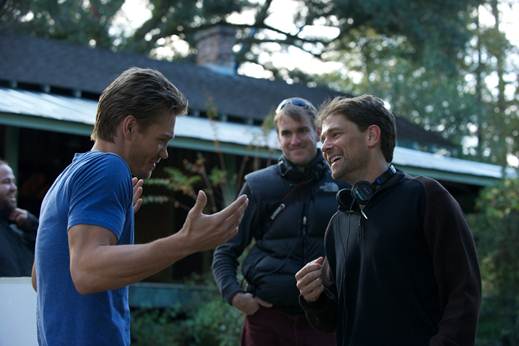