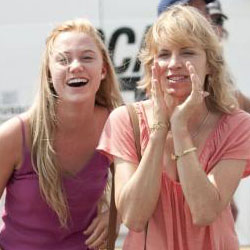 It all began with one, simple line of dialogue, “Yes, grandpa.” Maika Monroe hit her very first film set ready to perform as a mere background extra, but wound up with a line of dialogue and, from there, it was only a matter of time before she went from professional kiteboarder to professional actress.

Monroe stars in the upcoming Sony Pictures Classics release “At Any Price” as Cadence Farrow, Dean Whipple’s (Zac Efron) girlfriend. Dean helps his father Henry (Dennis Quaid) run the family business selling seeds to corn farmers in Iowa. When Henry starts to lose customers to his competitors, he turns to Dean for help, but when Dean opts to pursue his racing career instead, Cadence steps in to be Henry’s #2.

“At Any Price” has enjoyed a very healthy festival run, stopping at Venice, Telluride, Toronto, Zurich, and SXSW, but it’s time for the film to hit the public. In honor of its Tribeca Film Festival presence and upcoming April 24th limited release, Monroe sat down to talk about snagging the role, her character’s chemistry with Efron, working with director Ramin Bahrani, and more.

Catch it all for yourself in the video interview below and see “At Any Price” in full on Tuesday the 23rd at 9pm as part of Tribeca or in theaters when it gets an official release on the 24th.