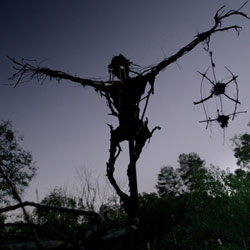 “The Killing Room,” “The Divide,” “The Pact,” and loads more in the works, but right now, it’s all about “Mr. Jones” for producer Ross Dinerstein.

The Tribeca Film Festival Midnight Program entry features Jon Foster and Sarah Jones as Scott and Penny. When Scott insists on ditching the big city for a secluded cabin so he can make a nature documentary, she leaves everything behind to support the venture. The place is the ideal no rules, no pressure existence until filming sunrises, local greenery and creatures becomes monotonous and Scott loses all motivation. However, just before giving up entirely, they catch a glimpse of the most interesting thing they’ve seen the whole trip, their neighbor, the famous yet mysterious sculptor, Mr. Jones. What starts as a serene show of nature descends into a suspenseful and nightmarish investigation as Scott and Penny try to creep closer to Mr. Jones’ workshop to get the ultimate close-up with his infamous scarecrows.

While the narrative is conveyed using a shaky cam technique, rather than calling “Mr. Jones” found footage, Dinerstein dubs it a “point of view film.” While the term is accurate, “Mr. Jones” is also far more than that. Not only is the story told from Scott and Penny’s perspective, but it also functions as a documentary, too, and when that documentary style implodes right along with Scott and Penny’s POV as they’re consumed by the narrative’s nightmare, you end up with something far more thoughtful than a camera crushing-induced cut to black.

While celebrating the film’s world premiere in New York City, Dinerstein took the time to sit down and talk about his collaboration with writer-director Karl Mueller, the challenge of subverting the found footage stigma, finding the ideal location, and more. Catch it all for yourself in the video interview below and see “Mr. Jones” in full at its final Tribeca screening on April 24th at 9pm.