“Orphan Black” is wowing audiences with conspiracy, cloning and mystery and ShockYa was happy to speak with Inga Cadranel, one of the stars from the show. Read below to learn more about Cadranel’s character, Detective Angela Deangelis, what fans can expect from this season and what Cadranel would do if she found out she had a clone. “Orphan Black” airs Saturdays at 9/8c on BBC America.

How were you approached to be a part of this show and how would you describe your character, Angela?

Inga Cadranel: I worked previously with both of the show’s creators. [I worked with] Graeme Manson on a series I did with him for two years, a comedy and John Fawcett–I worked with him on a cop procedural for a year. So I worked with both of them in different facets. I got along fantastically with both of them and I’m a big fan and admire their work. I auditioned like everyone else, but because I had worked so closely with them before, they both knew me very well. Everyone in town wanted to get in on this show…people would tell me about it…saying how amazing it was…so, the fact that the guys knew me very well–they knew my work, they knew what I could do–I think that really helped me land the part…I read this script once and thought “This is going to be something special.”

What’s your favorite thing about working on this type of show?

Inga Cadranel: Well, sci-fi is such an exciting genre to play because the possibilities are really endless. When we get the script each week, it’s always so exciting to see what it’s going to be about and what’s going to happen next. We were all just as on edge as I’m sure the viewers are to see where Sarah…will go. It’s always very freeing, I guess, to do sci-fi because the possibilities are endless. It’s not going to be the same formula per episode…You won’t be doing the same thing every time. So in that regard, it’s exciting to play this genre. And also, because it’s so well done, it’s almost like it could really happen. It’s based in such a real, sincere style that it doesn’t feel like sci-fi in the way of [having] creatures and aliens. But, it’s very real, very human, so it makes it almost more thrilling because the viewers can feel like this could really happen to them.

As the season progresses, what can fans of the show expect from your character?

Inga Cadranel: She’s definitely getting more intense. I can’t give anything away because the show has so many twists and turns to it and the discoveries that are made [by] all the characters…makes it really, really cool and exciting. I can’t really give anything away. I think my character becomes more driven and more intense with a common goal, which is finding out what’s going on [laughs]. I can’t really give any more information than that.

Well, I’ll just ask for the record–even though you can’t really give anything away–what kind of shockers can fans expect later this season? We’ve already seen some amazing stuff happen already.

Inga Cadranel: Yeah, and a ton more happens, as far as Sarah, Tatiana Maslany’s character, is concerned. I think every episode starts to be another shock, another reveal and another clue into this web that she starts to realize and it’s really sordid and it goes really deep. It’s not what she expected and it starts to get woven together in a real interesting way.

The show itself seems to be one that, of course, sci-fi fans would like, but especially fans of shows like “Dollhouse” and “LOST,” since “Orphan Black” also deals with conspiracy and the idea of clones. Why do you think these story elements resonate so well with fans?

Inga Cadranel: Well, you’re right–it is science fiction technically, but at the same time…I like the new style of science fiction because it’s similar to [thrillers] and [mysteries]. So there really is a broad spectrum of the type of viewer you can get. It started for me when I started watching “Battlestar Galactica.” At first, I was like, “Oh, I’m not a big sci-fi person, I don’t know if Ill like it,” and I started watching and I was like, “No, that’s not what it’s about, that one label. It’s full of surprises and intrigue and mystery and thriller elements, too.” And it’s based in sincerity. It’s based in reality so people can really see themselves as these characters. They can see this happening to them. I think that’s a big draw, like “Dollhouse” and “LOST,” too. You can put yourself in those shoes, like with “The Walking Dead” as well. They are…real humans in this far-out situation. And the people are playing them with such good acting and such sincerity that it’s a real draw for audiences because they can see themselves in this situation.

In this hypothetical situation, if you found out you had a clone, how would you react?

Inga Cadranel: [laughs] That’s a great question. No one’s asked me that. Oh, God, how would I react? I definitely wouldn’t do like “Orphan Black” and try to drain her bank account. I think, for me, it would be a more traditional [route]; trying to talk to whatever doctors or scientists or government officials who authorized it and what it means in the broad spectrum for my family, you know. That’s kind of a boring answer, but it’s probably more of a realistic approach to what I would do. I’d probably go to a governmental office or the WHO, stuff like that. 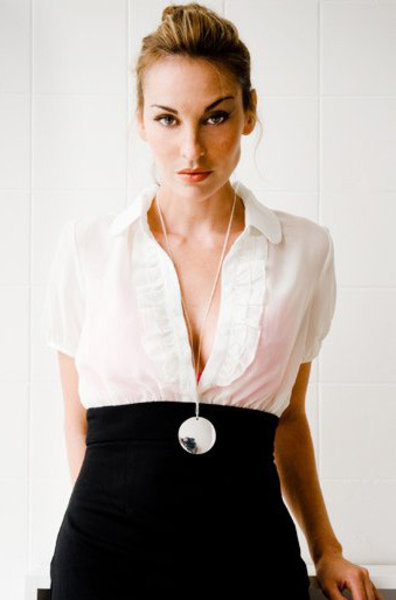