Manhunt: The Inside Story of the Hunt for Osama bin Laden Movie Review

Title: Manhunt: The Inside Story of the Hunt for Osama bin Laden

The story at the core of this curiously directed and somewhat misleadingly titled documentary — an adaptation of Peter Bergen’s excellent, bestselling book — is an innately fascinating one. Unfortunately, as either a primer on America’s terrorist takedown infrastructure or a megaphone for the insights of the (many female) analysts who helped untangle the ambiguity of information in aid of that cause, director Greg Barker’s messy “Manhunt: The Inside Story of the Hunt for Osama bin Laden,” premiering May 1 on HBO, doesn’t forcefully connect, and as such remains a frustrating viewing experience.

The story of the ALEC Station group — the first CIA team tasked with finding bin Laden, formed in 1995 — is an engrossing one, and the putative leaping-off point for this nonfiction inquiry, whose strongest selling point may be the array of direct interviews with these former intelligence analysts. The regret and guilt is evident on the officers’ faces as they recall the weeks following the September 11, 2001 terror attacks, for which they were suddenly “responsible” in the words of many pundits outside of government and several voices within it — even though their clear warnings about bin Laden had either gone largely unheeded and/or lacked operational intel. There was a “foundational change in organization” post-September 11, of course, and sharing information rather than compartmentalizing it became the de facto position.

Bergen’s book, while comprehensive, is far from unwieldy, even as it chronicles bin Laden’s rise from his tangles with the Soviet Union in Afghanistan up through bombings on the USS Cole and American embassies. The movie version of “Manhunt,” on the other hand, is a thicket of distracted impulses, themes and half-litigated theses. While analyst interviewees like Cindy Storer and Barbara Sude, as well as Marty Martin, the former senior CIA case officer in the Middle East who became the day-to-day manager of the organization’s worldwide operations against al Qaeda, give “Manhunt” an undeniable insider-authenticity, the movie ping-pongs from an early, 1990s study of Al Qaeda (quite interesting) to the terror attacks and the CIA’s embrace of black site foreign prisons (“Let’s just say boutique locations,” says one subject), before alighting back on Bergen and Peter Arnett’s March 1997 CNN interview with bin Laden, in which he first formalized his declaration of war on the United States.

Other parts of the film cover CIA analysts moving on to work as “targeting officers” in various war theaters (Nada Bakos, for instance, heads to Iraq, where she spends so much time hunting brutal Al Qaeda in Iraq emissary Abu Musab al-Zarqawi that soldiers jokingly start referring to him as her boyfriend). There’s trenchant analysis buried amidst these competing threads, as when retired Army General Stanley McChrystal says of the United States in general, “We haven’t taken the time to not be blind, deaf and dumb in areas of the world that matter to us.”

But “Manhunt” can’t decide if it wants to tell a history of Al Qaeda, the story of the overhaul of the American security and spying apparatuses post-September 11, the story of the enhanced interrogation/torture debate and American foreign policy adventurism more broadly, or just the Abbottabad OBL raid (to which it devotes by far the smallest portion of time). The success of the book — distilling the essence of each of these strands, and connecting them — proves too difficult a lift for Barker, who employs a couple empty directorial tricks to try to enliven a graphic depiction of the Al Qaeda terrorist network, but doesn’t winnow his sources effectively. I wouldn’t necessarily recommend against anyone watching “Manhunt,” as there are definitely far bigger wastes of time out there. But there are also better resources — starting with Bergen’s tome, and inclusive of Kathryn Bigelow’s “Zero Dark Thirty” — that chronicle the search for bin Laden from 2001 until his death. 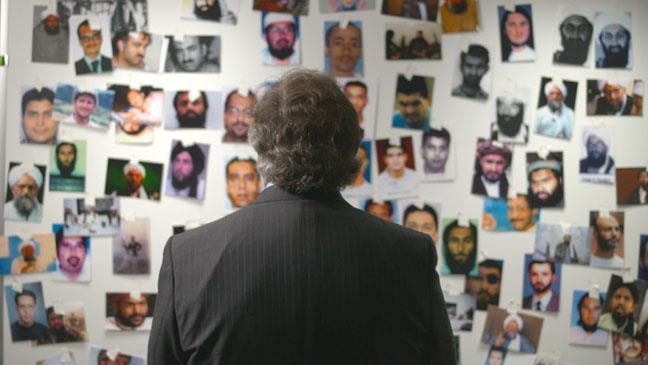