The cute cat effect is there, but the tragedy of Lil Bub’s condition, the lack of a well constructed narrative, and the inclusion of some weakly related side stories keep “Lil Bub & Friendz” from being as fun and poignant as it could have been.

For those who aren’t in-the-know, Lil Bub is the ultimate Internet cat celebrity. One day a video of Bub popped up on YouTube, showing her stalking and then pouncing on the camera. Soon thereafter, the views started pouring in and then in came the Lil Bub blog, Facebook page, merchandise, and more. However, while we were all fussing over and admiring Bub’s unusually adorable mug, she and her owner, Mike Bridavsky, had to pay very close attention to the condition that made Bub who she is – a number of genetic mutations that left Bub with dwarfism, polydactylism and deformed lower jaw.

While “Lil Bub & Friendz” does cover every angle, exploring the evolution of the Internet celebrity, the appeal of cats specifically, Bub’s fan base, Mike’s personal connection to Bub, and more, co-directors Juliette Eisner and Andy Capper have a tough time creating much momentum because they don’t seem to know what to do with the material they have. For instance, if you’re making a film about a cute cat that went viral, you’re basically handed an opening hook. However, rather than show what makes Bub worthy of such fame, we get this strange presentation of Bub on a tacky alien spaceship set, jokingly yet oddly suggesting the cat is so bizarre, she’s otherworldly. Perhaps it could have worked had it been funny, but it comes across more like the uncomfortable situation when you’re stuck watching a pet prance around in a costume who very clearly doesn’t appreciate being dressed up. Plus, even worse, the opening also alienates viewers who aren’t already familiar with Bub.

Things improve as we start to explore the inner workings of the Internet sensation. Eisner and Capper run through a string of very familiar faces, most cat-related, and the opportunity to get a behind-the-scenes look at those unforgettable web celebrities is just as enigmatic as the viral material that made them famous in the first place. There is some talk about how and why cats in particular can charm the public into millions of views and likes, but the large majority of the points made are surface-value and rather obvious. But this film isn’t about Grump Cat, Nyan Cat or any of the others; “Lil Bub & Friendz” gets all of its heart from Bub and Mike – if only Eisner and Capper knew how to maximize that.

Whereas they could have told a compelling story about how Bub was found in a backyard shed and nursed by her savior, the filmmakers get sidetracked, focusing not on Bub, but on Bub’s rescuer’s cousin’s granddaughter, desperately trying to draw a connection by purporting she’s unique like Bub, but just winding up with five minutes of material that feels like they belong to another movie. However, when they do manage to keep the attention on Mike and Lil Bub, the film excels every now and then.

Sure, Mike is thrilled Lil Bub’s fame pulled him out of a financial crisis, but his connection to Bub is so much more than that. Getting to see the two of them navigate this odd world of celebrity together is what provides access to the material and gets it to rouse emotion. Whether there’s an awkward time jump in the narrative or the story just veers off course, Bub and Mike’s relationship is almost always there to pull you right back in, and also to let “Lil Bub & Friendz” go out with an exceptionally heartfelt conclusion.

In an effort not to spoil the big reveal for Bub newcomers, we’ll steer clear of details, but whether the first 60 minutes of the film charms you or not, the last five will undoubtedly get the waterworks flowing. Because the large majority of the film is on the weaker side, it can feel exploitative, but it’s reality and a really cute cat, so there’s really no need for the film to earn the tears; Bub and Mike do it all on their own. 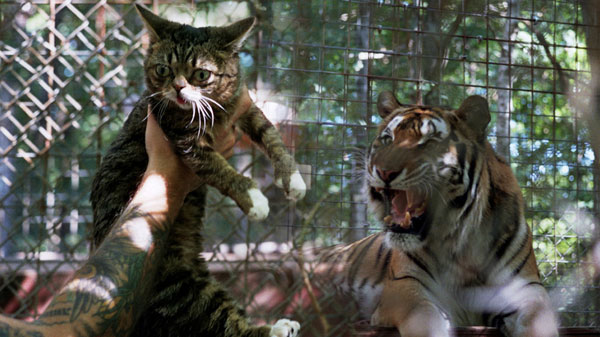