The box office results for the opening weekend of the 2013 summer movie season (May 3rd – 5th) is all about Iron Man 3. The lone wide release etched its name in the record books with the 2nd highest opening weekend ever. Meanwhile, the majority of holdovers were left with just scraps. Here are the studio estimates:

With a hefty assist of $15.2 million from Thursday night previews, Iron Man 3 skyrocketed to the 2nd best opening weekend of all time on the domestic front (The Avengers holds the title with $207.4 million. Worldwide, the Marvel Studios release has already climbed to $680.1 million (including the above domestic total) leaving no worries about the production budget of $200 million.

Not that this will skew the results over the next few weeks, but reviews from both the lovely critics and the masses are favorable. And with only a Star Trek sequel on the horizon that will dip into a similar audience pool, the third entry could surpass 2008’s domestic run of $318.4 million. Iron Man 2 sits at $312.4 million.

But with this installment opening in 3D IMAX (unlike its predecessors), and in far more screens across the country, the overall response at theaters could end up being on-par with the other Iron Man entries. That said, this will shatter more records in international territories.

In other news, Oz the Great and Powerful currently holds the longest streak in the top ten with 9 weeks. Its domestic total has soared to $228.5 million.

This Friday, The Great Gatsby will ask Downey Jr. and the Marvel Universe to share some of its profits, as it will also be released in the gimmicky 3D. Also opening wide is the Tyler Perry comedy Peeples. Reviews will be right here my fellow Shockers! 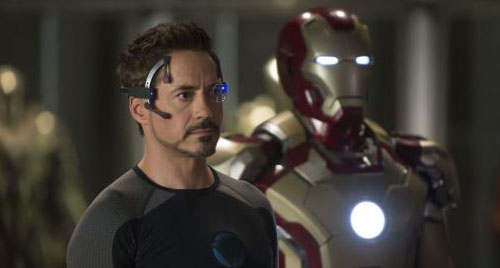