EXCLUSIVE: How To Follow Strangers To Open The Lower East Side Film Festival 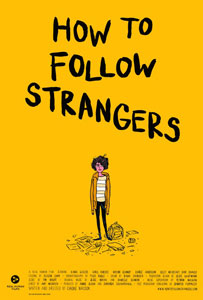 Shockya.com has the pleasure of breaking the news; Chioke Nassor’s “How to Follow Strangers” will open the 2013 L.E.S. Film Festival at the Landmark Sunshine Cinema on June 13th.

The film follows two interconnected stories. The first has roots in the true story of a woman who passed away in her Manhattan apartment and wasn’t discovered for a year. Chris Roberti steps in as Casey, a man who becomes so obsessed with the incident that he fakes his own disappearance to find out whether or not anyone would realize he’s gone. The other portion focuses on Ellie, a woman who regularly sees Casey during her daily commute and actually does notice when he’s gone. When she happens to cross paths with him outside that routine, she opts to follow him.

The L.E.S. Film Festival is dedicated to honoring independent films in all forms including features, shorts, documentaries, experimental, foreign and animation. The event takes place from June 13th through June 23rd at the Landmark Sunshine Cinemas, Anthology Film Archives, The Crosby St. Hotel and other Lower East Side venues in New York City with a special preview party taking place on May 15th at Casa Mezcal’s Obra Negra from 8 to 11pm.

Check out the full press release as well as the festival’s official poster below and keep an eye on LESFilmFestival.com for all the latest information.

“HOW TO FOLLOW STRANGERS” TO OPEN THE 2013 L.E.S* FILM FESTIVAL
TICKETS AVAILABLE MAY 15 AS JUDGES AND PANELS ARE ANNOUNCED

Tickets will be available for sale starting Wednesday, May 15 at Landmark Sunshine Cinema, 143 East Houston Street between the hours of 12:30pm to 2:30pm as well as online at LESFilmFestival.com. The Festival Directors will be distributing free product from sponsor Pop Chips and on hand to answer questions from interested parties looking to find out more information about the festival or wanting to purchase tickets.

L.E.S* is thrilled to open their 2013 festival with “How To Follow Strangers” directed by Chioke Nassor and starring Broad City’s Ilana Glazer.

There is a true story of a woman who died in her apartment and it took people a year to find her body decomposing in a crisp Chanel suit. A young man becomes obsessed with this urban tragedy and disappears, wondering if anyone will notice. A young woman who shares his commuting schedule DOES notice. And when he resurfaces, she decides to follow him setting of a chain of events that may eventually bind them together…

Ilana Glazer is the co-creator/star of the cult web series, Broad City, which is currently being adapted for television with Amy Poehler (star of NBC’s Parks and Recreation/Saturday Night Live) serving as Executive Producer along with Dave Becky (Executive Producer of HBO’s Bored to Death and FX’s Louie). This past year Ms. Glazer was nominated by ECNY (Excellence in Comedy in New York) for Best Emerging Comic and has been a featured comedian in Time Out New York, The New York Times, The Wall Street Journal, The Fader, and The Huffington Post.

A preview party for this year’s festival will be held on Wednesday, May 15th at Casa Mezcal’s Obra Negra from 8:00pm to 11:00pm. Tickets will soon be available for $15 and will include free wine bar and a film screening of this year’s upcoming program as well as past L.E.S* Award Winners.

L.E.S* is also partnering with the Writers Guild of America to feature a panel on June 17th that will feature Tamara Jenkins, Ira Sachs, Stu Zicherman, and Craig Zobel. Other special events, panels, live music performances, and the festival film line up will be announced in the near future. More information and updates can be found at www.lesfilmfestival.com.