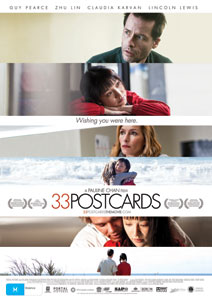 Even though we’re already neck deep in the summer movie season, there’s always the time and often the desire to take a break from superheroes and blockbusters, and this weekend, Pauline Chan’s “33 Postcards” could be that source of relief.

The film stars newcomer Zhu Lin as Mei Mei, a Chinese orphan who’s been sponsored by an Australian man (Guy Pearce) for years. When Mei Mei finally gets the opportunity to travel to Australia she’s determined to meet him, dreaming that he might make her part of his family, but is shocked to discover that he isn’t really the man he wrote about in his postcards.

A script from the Tribeca Film Institute’s All Access program, the second ever China-Australia co-production, and a lead actress who didn’t speak a lick of English when she was cast; “33 Postcards” is an exceptional production for a variety of reasons. In honor of the film’s May 17th limited theatrical release, Chan took the time to run through all her feats from finding and working with Lin to securing financing, ensuring “33 Postcards” is a standout film, and more.

Check out all the details in the interview below and catch “33 Postcards” on VOD now or in theaters this weekend.

To start, can you tell me a little about what inspired the idea?
Pauline Chan: It’s inspired by real life stories. The girl is kind of an inspiration I had from three different documentaries about homeless children in different countries. And the Australian man, the fake character, Mr. Randall, was inspired by an article that my-cowriter and myself read in the Australian newspaper one day. And so we felt that even though they’re from two worlds a part and two totally different stories – in real life, these two characters never met – but we decided that there’s enough of a connection in the internal world and the themes of these peoples’ lives, so we decided to go about making a fictional story out of these inspirations.

How much of the film would you say is factual?
The girl being sponsored is a common factor, but the girl never gets to meet the sponsor. All the things in the film, the elements, are based on research and things we did, but we just created the characters to represent that life. So the extortion scheme in prison, that is real. I met the character during the research time, but of course the name is not such. And also, the father and son story in the garage, there were also stories like that.

And how about inspiration coming from the movie itself? Has anyone told you they want to become a sponsor because of the film?
Yes, we have raised a lot of charity money. We have screened the film for charity functions in Hong Kong, China, Australia, and New Zealand, and we gave the proceeds of the screenings to charity children sponsorship groups. And the audience, many of them walked away wanting to do something in contribution for the children in the world. Some of them sponsored a child, others donated time as volunteer workers for to advance children’s’ causes.

Now how about casting? You’ve got a very well known star like Guy Pearce, but then you also have newcomers, too. Can you tell me about your selection process?
It was quite a long journey. When I was writing the script I had Guy Pearce in my mind. I’ve been a fan of his work for years. I never had a chance to work with him, but the character, Randall, has multiple dimensions. He has an internal world that is quite fragile and vulnerable, but on the exterior, he’s a very different man and he himself doesn’t even have that kind of awareness. In one scene, his social worker asks him about why he sponsors a child for ten years and he had no answer for it. His character goes through such a growth and Guy Pearce is multidimensional and so talented. He basically can transform himself from the beginning of the journey to the end of the journey where he actually risks his life to try to save someone [after having been] someone who’s skeptical and withdrawn.

I really dreamed about him playing that character, but at the same time, I felt that by the time we got to cast, I felt that it’d be an impossible dream for me to work with him. He was really in my script for a couple of years during the development of it. But luckily, the script got some recognition. It was invited to different workshops including the Tribeca Film Institute workshop to help international filmmakers like myself with interesting projects. The script was creating a profile for the project, so it was a long process, but it was filtered through his agent’s office and worked its way up to him and he read it and loved it and said yes. The biggest problem was waiting for his schedule, a window of opportunity. We actually shot the film sooner and quicker than we needed. Things kind of crammed up when he had a window of a few weeks for us for shooting. But he just went for it and I think he really makes the character fly off the page for us. He’s nominated for a best actor award in a number of countries for the role.

And how was it taking the script through the labs? Did you get any feedback during the process that really stuck with you?
The most inspiring things I keep hearing people say is that it is an emotional story that has a strong narrative, but a very delicate internal world. It’s also full of surprises. It’s not what people expect. I was really trying to hold on to the surprising elements and trying not to fall into any clichés because there’s so many holes and traps through creative development and making an original film with a distinctive voice is not an easy thing because there’s so many good films out there. You can be seen as following this or copying that. So that was something we tried very hard to stay away from, anything that is cliché.

How about transferring those intentions over to the shooting process? Is there anything you do as a director to make sure that stands out?
The other actor, the young girl in the movie, she’s a total newcomer. It was an interesting balance for me to achieve in terms of the technical side of making the film. Guy Pearce, on one hand, gets everything right in the first take and the girl takes many rehearsals to hit the point and then maybe sometimes even 20 or 30 takes to reach her peak in that scene. Also, there were other veteran actors, very strong actors in the film. Everyone in the film is known. Some of them have won best actress awards before, like her supervisor in the film, Elaine Jin. She’s won a number of awards and is a veteran actress. So they all come from a different level of expertise. I had to find a way to help a newcomer like herself as well as Lincoln Lewis who’s a young Australian actor who’s now working in Los Angeles, I heard. He comes from a TV background and works in a different way. And the language barrier was another thing I had to overcome as well in directing the performance so everyone is comfortable and truthful to the situation of the scene.

I read Zhu Lin didn’t speak much English before starting the film. How was it managing that?
She could not speak English at all. I auditioned in Hong Kong, in Beijing, Shanghai, and all over Australia for this girl. She needed to be great emotionally, a natural in some ways for it to feel authentic and not so technical and crafty in performance because of the role she plays. I had many young actresses and young girls who were talented and spoke fluent English, they’re command of English was perfect, however, they did not have that kind of innocence and purity that I envisioned for this girl. And then finally, after months of searching, I found this girl and her real life was very much like the girl in the story. As a very young girl she was taken away from her family to live in a youth camp kind of an environment, so she was kind of a homeless child without family, so she’s never been out of the town she was in so she did not have a big city girl kind of sophistication to understand the film world, but she could relate to the need and longing for a family. She’s strong inside and kind of soft and innocent on the outside, which is like the opposite, a ying and yang with the Guy Pearce character.

So she didn’t speak any English and through the auditions, the script was in English and she didn’t do well. But I detected something really interesting about her spirit. There’s a quality about her that fit my imagination of the girl, so I told her about the essence of the scene in Chinese and I said, ‘I want you to audition the scene in Chinese. Throw away the script and come back tomorrow to play the scene again,’ and she did and it really moved me to tears because the emotion was real. She drew from herself the feelings of longing and the sense of family and identity and love. It was all there for me. So I decide that she would be the perfect one and then for three months after casting her, she had English lessons and then during shooting she had language coaching and grammar coaching everyday. Three months later when we started the rehearsals, she was able to do it. She actually won the major award at the Shanghai Film Festival because of her performance and I think it’s a real miracle work she has done from no English at all to speaking English in every scene.

Can you tell me a little about the Australia-China co-production? I know this was only the second film to do that.
Australia has traditionally been a country that is influence culturally by Europe and it had a co-production treaty with the UK, Canada, and Germany, but three years ago, they signed a co-production treaty with China because Australia, geography-wise, belongs more to the Asian Pacific than to Europe. So it makes sense to have more collaboration between Australia and the Asian countries. For me, I come from a Chinese background. My family is from Hong Kong and I finished grammar school in Chinese before I went into English studies. Also, we couldn’t finance the film for over a year in Australia, and so it was quite clear to say we need money from outside to help us make this film and China was a natural partner because of the nature of the story.

To wrap up, you’re likely still enjoying the release of this film, but is there anything else that you’re working on?
Yes, I’m writing new stories at the moment. I hope to make a film between America, Australia and China in the very near future, which I’m aiming for as my next project.

Is that one similar to this at all? Maybe in terms of subject matter or tone?
No. It will be very different. It will still have family themes, but it’s the action genre. It’s a more fun, on the road type of movie.