Some actresses work their way into the public consciousness as much through tabloid shenanigans as any of their actual on-screen performances. Only 17 years old, Liana Liberato is opting for hard work, thank you very much. In director David Schwimmer’s underrated “Trust,” she delivered a stunning turn as an innocent 14-year-old suburban girl lured into a sexual liaison via online chatting — an act with ruinous consequences for her and her parents (Clive Owen and Catherine Keener). In her new film, the “Bourne”-inflected “Erased,” she stars as Amy, the crafty daughter of ex-CIA agent Ben Logan (Aaron Eckhart); the two try to escape a contract rub-out and outsmart their hunters as part of a wide-reaching international conspiracy. For ShockYa, Brent Simon recently had a chance to talk to Liberato one-on-one, about “Erased,” technology, international travel and life after high school. The conversation is excerpted below:

ShockYa: “Trust,” which was great, was about an online predator… but also this huge gulf between your character and her father, and all the distrust and alienation that followed the abuse. In “Erased,” your character finds out a shocking truth about her father, but Amy is able to move on and re-connect with Ben quite quickly.

Liana Liberato: Yeah, they’re in two very different head spaces, I think. Annie was completely against her father until the very end of the film, whereas with Amy she learns to adapt to her situation and ultimately help her dad. So I really liked the contrast between the two. I’m starting to see a pattern — my characters have a lot of daddy issues. (laughs)

ShockYa: “Erased” is set in Brussels — was this your first chance to shoot abroad?

LL: Yes, and it was my first time out of the United States. It was definitely a culture shock, but I had a great time. Brussels is beautiful, and we filmed half of [the movie in] Montreal, which is also amazing and had the best food ever. (laughs) We had one month in Montreal, and then we got two weeks off because production had to move everything to Brussels. I had flown back to Texas to be with my family, and then I went to Brussels for another month. And then, after we finished filming, I spent two weeks and traveled Europe a little bit. It was great. You have to take advantage of those things. I was 15 when I did the film, so my parents were on set with me, and then after we wrapped my grandma flew out and we did our little family vacation with her.

ShockYa: What’s it like having to juggle schoolwork and filming, and still have some semblance of a normal teenage life?

LL: It’s funny, because there are times where you’re just so crammed with other things to do that it’s hard to get any schoolwork done, but I do have a lot of downtime when I’m not working and I try to take advantage of those moments so I can bang out a little bit of my work. But luckily I only have about one week left of school, and then I’ll be graduated and everything! My mom normally stays on top of me. And when I was younger I had a tutor on set, and we had to legally put in about five hours every day.

ShockYa: Do you have any big post-high school plans, then? Are you thinking about college?

LL: All of my friends have graduated, I’m the runt. I’ve always had schoolwork hanging over my head as I’ve worked, and I’ve felt that it would be nice to take at least one year off and focus strictly on reading scripts and books and working as much as I possibly can. If I continue to have momentum then I’ll probably just do that. But if anything happens to slow down or I see a gap in my schedule I’d love to eventually go to NYU — if I can get in, I’m acting like I can, I don’t even know — and study some screenwriting or something.

ShockYa: As someone whose life recently was screwed up by the mere lack of an Internet connection, I’m jealous of Ben’s facility in “Erased.” His bank records and entire digital life get erased, and he just adjusts on the fly. Are you a big techie yourself — can you trouble-shoot all your own digital-era problems?

LL: I have the iPhone and stuff, but I don’t have any of those crazy-cool apps, so I’m kind of a little behind. It depends on what it is you ask me about. I could never act like Ben in the film — I can’t connect wires and talk on a dead phone. (laughs)

ShockYa: Are you a big texter? Do you find yourself connected to most of your friends via technology?

LL: In general I think that technology is incredibly addicting, and we’re constantly on our phones. I think people have to make a conscious effort to put their phones down and communicate with the person sitting next to them. I try to put my phone in my purse when I’m at dinner or with another person, but I think it definitely changes the way we communicate with people — a lot of the things that we wish we could say in person we say on the phone instead. And I think that’s kind of a downfall for us, because we should be able to puff our chests up and say it to their faces.

ShockYa: What was it like establishing a rapport with Aaron?

LL: We sat down with Philipp (Stölzl), the director, and kind of went through the whole script. And Aaron and I just had a good time bonding on set and running around and being silly. But for the most part I think that a lot of our bonding and work happened on set, because the director and producers were all very open to change, which was wonderful.

ShockYa: How do you feel about auditions? You have a nice body of work that I imagine opens some doors, but are you comfortable with that process?

LL: I’m so terrible. (laughs) I’ve always thought that it would get easier, but auditioning is something that still always gives me anxiety. It’s always nice to walk into a room and have people willing to work with you and talk with you, and that’s normally the treatment that I get, so I’m very lucky. But I’ve walked in completely prepared and had people just throw something very different at me and say, “Okay, do it.” You kind of have to keep an open mind during auditions. I remember when I was 10 or 11 years old and I was going in for presumably a big movie that never ended up happening. I went in for an audition after having already gone through three callbacks, and the casting director looked at me in the room and said, “You’re just not right for this part, I’m sorry.” That was the first big letdown for me. But you also have really good experiences.

LL: “Stuck in Love” comes out in June, and then I have another film coming out in October, a scary film called “Haunt.” I got to do a family-oriented film recently, and am in talks to do something [more comedic] very soon, so hopefully it’ll work out. 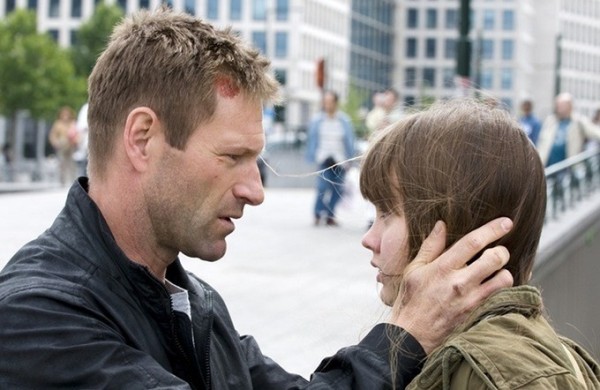