Most sequels are born of financial consequence, Hollywood studio calculation/desperation, movie star/producer hubris, or some combination thereof. That’s certainly not the case with “Before Midnight,” which again, like its predecessor, ranks as one of the more charming, and unlikely, cinematic follow-ups of the modern era.

In 1995’s “Before Sunrise,” director Richard Linklater cast Ethan Hawke and Julie Delpy as Jesse and Celine, a pair of young kids who cross paths on a European train and decide to kill 14 hours in Vienna before the former is due to catch a plane back home. He’s American, she’s French, and their cross-cultural, philosophically-tinged, flirty back-and-forth served as a heady cinematic stand-in for all the swollen romantic possibility of young adulthood. With its 2004 follow-up, “Before Sunset,” Hawke and Delpy expanded on their roles as performers in the original talky tête-à-tête, taking co-writing credits with Linklater in telling the story of a chance encounter some years later in Paris. (And if you’re looking to steal some money in a trivia bet, there’s also a brief scene between the pair in Linklater’s rotoscope-animated “Waking Life,” from 2001, though that scene is kind of an alternate-universe outtake in the grand Jesse-and-Celeste narrative.)

Thus, the first two movies in this series — neither of which is an absolute viewing requirement to submit to the charms of this offering — were very much stories where the journey was the point of the ride; they were fun, literate, thought-provoking cynic-romantic measuring sticks about tantalizing roads considered if not fully taken. Much more than its predecessors, then (and necessarily, given its characters’ ages), “Before Midnight” is a film that unfolds in the shadow of consequences. Life choices have been made, and Jesse and Celine must grapple with all the additional baggage that comes with any accrued wisdom in age. It’s a movie about adult romance that doesn’t pull punches about the difficulties of trying to carve a path through life to walk two-astride in good faith and keenness.

These and other less weighty topics were on the agenda when Linklater, Hawke and Delpy gathered in person earlier this week at a Beverly Hills hotel to discuss “Before Midnight,” their thoughtful musings punctuated by playful asides and easy laughter. Hawke, who describes the first film as “an exercise and adventure in not acting,” and warmly recalls the amazement and joy at being part of such a unique and ongoing collaboration, jokes that the three are “a little bit less impressed with one another” at this point in their careers.

With comfort and checked-at-the-door egos, though, comes the ability deep-dive for substantive truths about long-term relationships. “I don’t think the [actual] dynamic has evolved too much,” says Linklater. “We’re a band who’s still performing in a very similar manner — we’re the Ramones or something. Our inner dynamic, the way and things we push and pull out of one another… that’s largely the same.” Adds Delpy, “It’s [most] important to make sure that it’s balanced — that it’s not a macho movie or a feminist, man-hating [tract]. That’s our goal.”

While the “Before” films have all to varying degrees eschewed visual panache in favor of conversation, and embraced long, static set-ups, Linklater also felt it necessary to open “Midnight” with a 14-minute, single-take driving scene — a fairly remarkable achievement. “Just you saying that sparks an anxiety in me,” exclaims Delpy in mock-panic recollection. “My heart is beating slightly faster!”

“I know what these guys can do as performers,” explains Linklater of his choice. “We’ve worked together a lot over the years and I wouldn’t try that with most actors, but I know they can do it. So it’s a lot of hard work, but I knew we’d get there. It was important, though, I think at the beginning of the film, for people who felt like they knew Jesse and Celine to some degree to just be dropped in with them. And the reality of that lengthy take — with no editing, no telling you who to look at, no emphasis, just the proscenium of Jesse and Celine — [is] so that you feel like you’re hanging out with them. The viewer has to accept that at some point consciously as reality, so it made sense to just drop into their reality. That was the vibe that the film needed off the bat.”

If its script, like its predecessors, would likely be “thrown out of any decent screenplay writing class in America,” as Hawke notes, owing to long scenes and controlled settings, the process for elaborating upon Jesse and Celine’s relationship in the two “Before” sequels has been about “building an infrastructure that can support brutal honesty from the characters,” says Linklater.

“Usually, in the script phase, if we think we’ve gone too far (then) that’s a spot we should explore,” he continues. “Cinema, storytelling language says ‘this plus this equals an unlikeable character and you just don’t do it.’ We think, ‘Well that’s a construct, that’s not really real — it’s just the narrative storytelling bubble that so much cinema exists in.’ Maybe our audience, whoever that is, will appreciate that we go there on this subject, and haven’t built an artificial thing.”

“I’ve talked to a lot of people who are older and I think [that what has] charged them up about the movie [is seeing] these two people who are still trying — they’re communicating and they’re making each other laugh, when they can. You see them in the ring, together,” Linklater adds. “I think often in relationships one if not the other person has checked out — if you have problems, they say, I’ll deal with it as minimally as I can. This is a good depiction of two people who care enough that they’re still working through things and engaged in the problems, they haven’t checked out.”

It’s tough but interesting, because “it’s whether or not your lives are still growing along the same road,” says Hawke, “or does one need to change the road to keep growing?”

NOTE: “Before Midnight” opens this Friday, May 24, in New York and Los Angeles, before expanding nationwide to other markets via distributor Sony Pictures Classics. 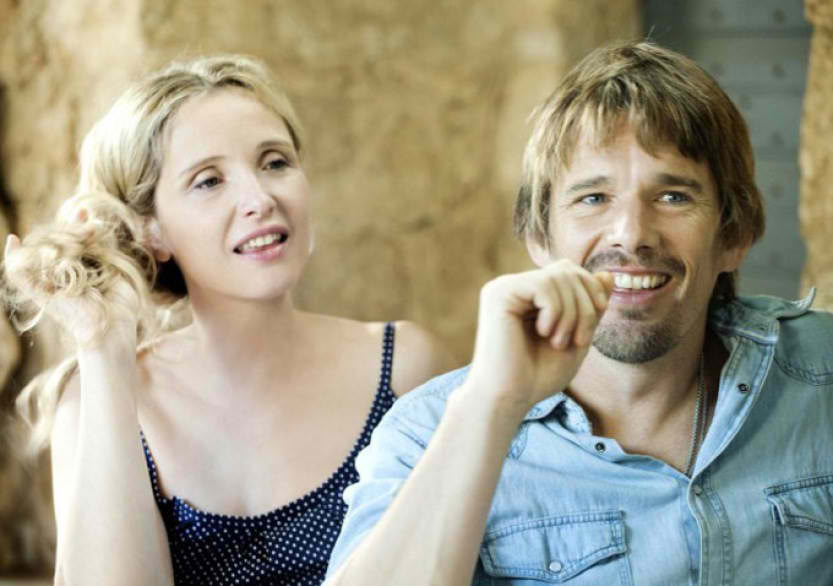