Mixing creatively choreographed stunts, diverse production designs and ever-evolving character motives and relationships in an aging action franchise can be a difficult process for many directors. But ‘Fast & Furious 6′ helmer Justin Lin, who returned for his fourth consecutive installment of the hit car racing series, proved that retooling a successful series to reflect the characters’ ever changing motives and emotions, can actually make a franchise more captivating. After the surprise box office success of ‘The Fast and the Furious’ in 2001 and its subsequent follow-ups, Lin proved that keeping an action film current with ever-changing stunts and storylines is the best way to keep audiences entertained.

‘Fast & Furious 6’ picks up in the aftermath of its immediate predecessor, ‘Fast Five,’ as Dom (Vin Diesel) and Brian’s (Paul Walker) crew are living the high life after their Rio heist left them with $100 million. However, despite their efforts to retire from crime and start new lives, their lives are left feeling incomplete.

The crew, including Roman (Tyrese Gibson), Han (Sung Kang), Gisele (Gal Gadot) and Tej (Ludacris), are given redemption and a chance for immunity by Hobbs (Dwayne Johnson) and his new partner, Riley (Gina Carano), if they can track an organization of lethally skilled mercenary drivers, lead by mastermind Owen Shaw (Luke Evans). Dom puts his life on the line for the love he thought was dead, Letty (Michelle Rodriguez), who’s now working for Shaw. Aided by Brian, who leaves his love, Mia (Jordana Brewster), and their young son, the crew reunites in London to track down Shaw’s crew, so that they can return home and make their families whole again.

‘Fast & Furious 6’s screenwriter, Chris Morgan, infused the crime thriller sequel’s story with a limited plausibility and just enough details about Shaw’s plan to give Hobbs enough incentive to seek help from Dom and Brian’s crew, who he so desperately sought to arrest. The film carefully carefully shifted the series’ focus from the crew’s interest in racing cars and Brian trying to gain Dom and and Mia’s trust, to the crew learning to live with the consequences of their actions. The fifth sequel most intriguingly gave an insightful look into Dom’s struggles to protect and rely on his family, no matter how much they seemingly betrayed him. Despite starting to build a seemingly natural bond with police officer Elena (Elsa Pataky) in Brazil during ‘Fast Five,’ Morgan offered a surprisingly emotional look into the lengths Dom would go to in order to reunite with his true love, Letty.

While ‘Fast & Furious 6’ offered few details on Shaw’s true plans and how far his political influence reaches around the world, especially with how he recruited Letty to his crew and how he controlled Brian’s former career as an undercover officer with the LAPD, the choreography and stunts created for the fight and chase sequences were intriguingly and cleverly designed. From the initial chase sequence between Dom and Brian’s crew and Shaw and his crew through the streets of London to the climatic sequences in which Hobbs sees his final attempt to stop the former British Special Forces soldier, the characters fearlessly engaged in death-defying stunts to save their lives. While the car racing was a major source of conflict in the first few films in the series, Dom, Brian and Hobbs now creatively use their knowledge of fast cars as a way to track and stop criminals, and use their fearless fighting and driving to stop the criminals who truly pose a threat to their families and society.

Production designer Jan Roelfs also creatively aided in creating a strong division between the motives and means of Dom and Brian’s crew with Shaw’s crew by making sets that reflect their true nature. Roelfs built a grungy, abandoned and temporary warehouse where Shaw and his crew set up their cars, machines and computers to map out their latest plans in obtaining the computer chip. The warehouse’s dim lighting and cluttered setup, which often placed objects between the crew members, such as a car hood between Letty and Shaw, subtly emphasized the tension and unease they had around each other. Meanwhile, the sophisticated garage where Dom and Brian’s crew set up their equipment, included hi-tech cars, computers and guns showcased their strong determination in tracking Shaw’s movements throughout London and the rest of Europe.

Lin once again creatively interlaced creative stunts and production design against a backdrop of high adrenaline car chases to showcase how moments of crisis push people’s endurance and trust of people they love. While Dom and Brian’s crew learn to repent their crimes as they help Hobbs track down Shaw and try to stop his plan of destruction, the fifth sequel in the hit action franchise skillfully balances witty, to-the-point dialogue with intriguing stunts and meaningful production design. While the main returning franchise characters finally seem to find peace with their pasts and each other, Lin cleverly sets up a seemingly intense conflict for the already greenlit ‘Fast & Furious 7,’ which seems to promise another emotional, action-packed story about the true meaning of family and revenge. 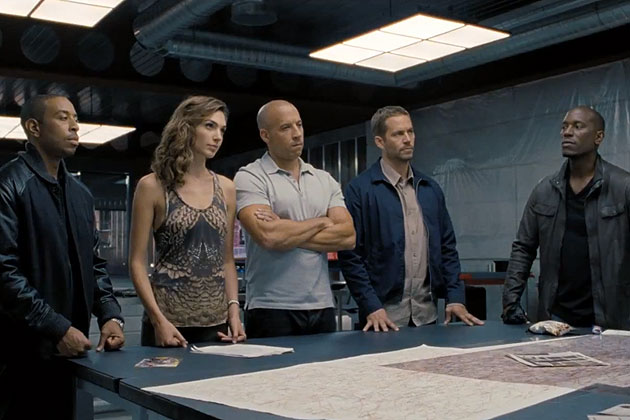