Thoughtful and slick, “The East” functions both as a highly engaging and riveting thriller, and also something that’s deeply conflicting, forcing you to juggle all angles of the scenario while the film is rolling and long after, too.

Sarah Moss (Brit Marling) left the FBI and is now a new recruit at Hiller Brood, a private intelligence firm dedicated to protecting some of the biggest corporations in the country. Sarah is hand selected by her boss, Sharon (Patricia Clarkson), to infiltrate an anarchist group known as The East in an effort to stop them from sabotaging the Hiller Brood clientele. At first, Sarah is determined to do the best she can to impress Sharon and jumpstart a successful new career, but after infiltrating The East and spending a significant amount of time with its members, she can’t help but to recognize that stopping them outright might not be the answer.

Like its promotional campaign, “The East” reels you in right from the start via a viral message from the group. In mere minutes the film manages to both relay The East’s motives and goals, and captivate the viewer, making for the ideal transition into the meat of the story.

Sarah’s in an unusual yet familiar situation. Even if you know little to nothing about the inner workings of the FBI or the business of private intelligence, you probably can relate to telling a boss you’ll do whatever it takes to get a job done in an effort to move up in the ranks. Even though we know nearly nothing about Sarah, just a few moments into her interview with Sharon, you’re already cheering her on to get the gig, and that inclination to root for Sarah to succeed holds strong throughout the film, contributing to a significant amount of its suspense.

But even while Sarah functions as the audience’s anchor, there are a number of other characters who establish quite the connection, too. Alexander Skarsgård’s Benji is the leader of The East and while he appropriately has the most commanding presence, Izzy, Doc, and Luca (Ellen Page, Toby Kebbell, Shiloh Fernandez) all make significant impacts, too, and it partially stems from the fact that while The East does have violent and very illegal tendencies, Benji runs an organization that fights for a specific cause, but also leaves room for individual beliefs and opinions.

Page’s Izzy enjoys a notably intense arc. Not only does she go on a personal journey with Sarah while slowly accepting her, but she’s also got a hefty dose of personal demons that come to a head in one of the film’s most gripping and disconcerting scenes. Doc also has very personal ties to their mission that are further enhanced by Kebbell’s charm. Again, while the group’s actions are illegal, the access to Doc’s perspective does make you think. And then there’s Fernandez’s Luca who wins big from the moment he steps on screen, as he’s the one to help Sarah out of a serious jam and introduce her to The East. While he does generally fly under the radar from that point on, Luca’s presence still always functions as a source of comfort.

The contradiction between the group’s gentle nature and the viciousness they resort to in order to achieve their goals is one of the film’s most powerful aspects. You’re constantly jumping back and forth trying to decide whether Sarah should commit to supporting one side or the other, wanting The East to succeed for the good of the masses, but also hoping they fail for the sake of their immediate targets. With a running time of just under two hours, “The East” does slow every now and then, but the overwhelming presence of this juxtaposition compels you to keep engaged because you’re intensely connected to so many different elements of the equation.

Minus a few instances where The East’s efforts to teach Sarah what they’re all about conjures up some unintentional giggles, director and co-writer Zal Batmanglij delivers a film with the enchanting pizazz of a high concept, but also the sheer terror of a hauntingly real scenario. Without having done any research into the behavior and nobility of the biggest corporations in the country, it’s impossible to judge the film’s real life validity, but regardless of its accuracy, it’ll still leave you second guessing the quality of your water, antibiotics, and more and, in turn, make you wonder if we’re better off having a group like The East around. 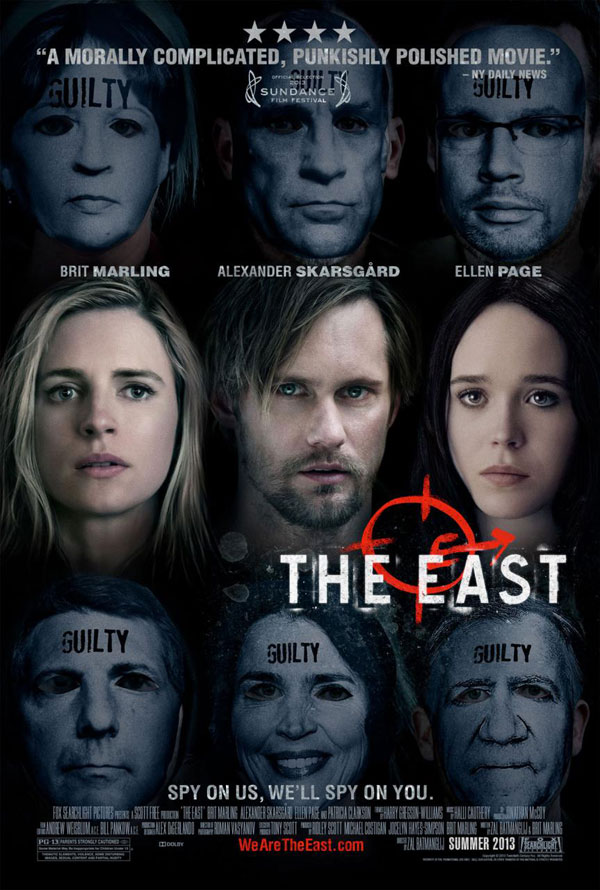