Zal Batmanglij makes a valiant sophomore effort to tickle the masses with thought over real world topics in “The East,” but gets over zealous and fails to do much else after he makes his first big political message. It’s great to see a bold young filmmaker such as Zal burst out on the scene and get the kind of creative freedom to tell the stories that he wants to put out there for the masses, but he’s probably a film or two away from creating a real masterpiece. “The East” is still a solid picture, but there’s still a couple of story elements missing to keep it from being great.

“The East” is focused on a determined young operative who’s eager to prove herself during her latest job as she goes undercover. As she’s infiltrating an organization that’s hell bent on teaching a lesson to the corrupt corporate giants, she begins to understand the mindset of those in the group and begins to question which side she really wants to be on.

The movie’s heart is in the right place, dealing with the overall corruption of corporations that we’ve seen so much in America nowadays. Seeing a group like The East rise up and fight back against those companies that have made so many American’s lives a living hell is definitely something that could happen in the real world at some point. At the same time the general story of our main character is a bit lacking. It’s a bit obvious that at some point in the movie she’ll get in too deep with the group and eventually begin to question her allegiance and, at some point, will side more with The East than her own organization. But her character doesn’t really have any particular key moments written in the story where she suddenly wakes up, looks around her and realizes that siding with The East is the right thing to do. When she has her big monologue towards the end, she spouts out nonsense about how they live and uses that as a viable excuse to go ahead and take their side. With the way that her character acts throughout the picture, she never gives any big hints to fully understanding and accepting the way that they live and see the world. She’s fighting them throughout most instances and still doing her job, so the transition towards the end is really rough. At the same time the overall message about corporate greed and unity is still there, although the balance of the story is a little uneven at times.

That’s not to say that the cast isn’t brilliant in their own ways. Brit Marling shines on the big screen once again as she plays the double agent that gets swept up by the values and beliefs of the organization she’s investigating. Then there’s soft spoken but powerful Benji (Alexander Skarsgård) who plays his role with a mixture of emotions as it’s revealed that there’s a lot more going on with this character than just being the stereotypical leader. Ellen Page gets her moment to shine as Izzy, an outspoken young woman whose strong beliefs you know will get the best of her at some point. While the story arcs of each character are a bit on the predictable side, the cast is strong enough to where you forget all about that and enjoy the ride to a degree.

But since this is a Zal Batmanglij production, we need to take his vision into consideration. For a director who’s just on his second feature film he’s got a distinct vision, a voice, that’s hard to ignore. While the length and the balance of the story is a little inconsistent for my tastes, you still get a strong sense of his style. He likes to slowly dip you into the world, the story, as if you’re slowly going into a pool, adjusting to the temperature. We’re dealing with a big topic that Batmanglij has strong opinions on, so in some ways this isn’t too surprising to see. It’s a shame that the score is anything but memorable, but you still notice it.

“The East” succeeds in trying to let a generation know that they should stand up for their rights, fight on and strive for a better future. At the same time it comes off as too preachy and while the cast is fantastic, it doesn’t do enough to stick in your mind after the credits have rolled. 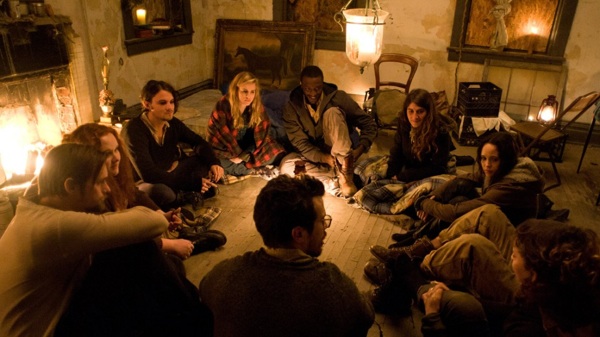