Title: Wish You Were Here

While people often strive to live as carefree and happy of a lifestyle as they can the stark realization that one person’s seemingly meaningless actions can drastically change the lives of many others can ultimately lead people to question their decisions. This is certainly the case in the new mystery drama ‘Wish You Were,’ which was helmed by first-time feature film director Kieran Darcy-Smith. The filmmaker, who co-wrote the movie’s script with his wife, actress Felicity Price, courageously explored the physical and emotional consequences even one careless night can have on several families for the rest of their lives.

‘Wish You Were Here’ follows Sydney couple Dave Flannery (Joel Edgerton) and his pregnant wife, Alice (Price), who decide to relieve their stress of raising their two young children and trying to make ends meet. They accompany Alice’s sister, Steph (Teresa Palmer), and her new boyfriend, Jeremy (Antony Starr), on a Cambodian business vacation. But their fun suddenly stops after a night of partying, as they discover Jeremy has gone missing.

The local authorities fail to make any progress on Jeremy’s whereabouts, so they return to Australia to move on with their lives. Dave actually knows more about what happened to Jeremy than he’s letting on, which gradually leads to shocking revelations about various sexual and drug-related transgressions. The truths threaten the Flannerys’ marriage, as well as Alice’s relationship with Steph, as they try to move on with their lives and move past the betrayals their seemingly luxurious vacation brought on.

Edgerton was well cast in the role of the protective, yet at the same time secretive and suspicious, role of Dave. He naturally transforms the character from being a free-spirited family man in the flashbacks of the group’s vacation, to experiencing feelings of distrust and paranoia after returning home to his family in Sydney. Despite Alice’s pleas for Dave to be completely honest with her and her distress over not being able to maintain a trusting relationship with her husband, Edgerton audaciously plays the character as not relenting to the strains in his personal life.

The actor soulfully channels the character’s fear of the consequences of his actions in Cambodia and allow his anxiety to not only alienate his wife, but also the Australian police who are willing to look into Jeremy’s disappearance. Not only does Edgerton keep Dave’s knowledge of what really happened on their trip a secret from his wife and the police during the film, he also holds his emotions and knowledge from the audience until the protagonist finds the best time to confide in his wife.

Cinematographer Jules O’Loughlin also skillfully emphasized the shift in the dynamics of the relationships between Dave, Alice and Steph after they return home through the differing lenses he used during the shoot. O’Loughlin wisely used longer lenses to create voyeuristic framing and intimate over-the-shoulder shots of the characters’ shocked reactions to each other’s revelations of betrayal of each other. But during the more intense and active shots, particularly when the couples were partying in Cambodia, the cinematographer cleverly used wider lenses to capture the character’s spontaneity with each other.

While Edgerton intensely captured Dave’s fears of revealing his knowledge and feelings with Alice, and O’Loughlin cleverly captured the true nature of the couple’s behavior through diverse lenses shots, Darcy-Smith and Price’s heavy use of flashbacks unfortunately slowed down the story’s momentum. The screenwriters daringly aimed to build the mystery of what really happened to Jeremy by not showing the story in chronological order, and waiting until the end of the film to show the full clips of the flashback scenes they featured earlier in the plot. While showing the couples’ actions and emotions while they were on vacation proved important in establishing their estranged relationships when they returned home, the numerous prolonged flashbacks actually instead took away the relatability and vulnerability of their feelings and motivations.

‘Wish You Were Here’ is a thought-provoking, emotional insight into the strains placed on relationships in times of despair and confusion. Edgerton naturally embodied the protagonist’s pain and confusion over how to deal with Jeremy’s disappearance with his conflicting drive to protect his family. His performance and interaction with his co-stars, particularly Price, was stunningly captured visually by O’Loughlin, who smartly used an array of camera lenses to capture both the characters’ intimate moments and the action-packed sequences. Unfortunately, the gritty and humbling nature of the story was hindered by the continuous flashback sequences, which rigidly broke up the characters’ emotions and actions. 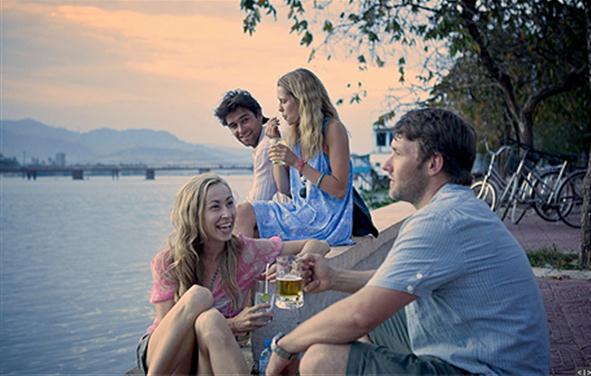