Liane Balaban made an impression as Dustin Hoffman’s sweetly sad, set-to-wed daughter in “Last Chance Harvey,” and will be recognizable to plenty of folks from her recurring role on the small screen’s “Supernatural.” In her latest film, however, Balaban gets to channel a wild, daffy femininity whose unhinged, slightly damaged siren call will strike a chord of familiarity in many a guy. In the vein of “Mad Love” and “Sweet November,” “Finding Joy” finds disillusioned author Kyle (Josh Cooke) returning home and having to cope with various indignities tossed his way by his estranged father (Barry Bostwick) and new stepmother (Lainie Kazan), when he meets Balaban’s spunky bohemian title character. Frustrated, comedically-inflected romance ensues. For ShockYa, Brent Simon recently had a chance to talk with the Canadian-born actress one-on-one, about “Finding Joy,” superstitions, her unisex menstruation website and more. The conversation is excerpted below:

ShockYa: So have you started “69-knuckling” with friends (as in the film)?

Liane Balaban: (laughs) No, I haven’t yet. I don’t know if I’m that boundary-less. I think that my comfort zone is smaller than Joy’s comfort zone. …I’m not sure if someone ever 69-knuckled (writer Shona Tuckman), or if this came from her mind. That would be interesting to find out — I didn’t think to ask her that while we were filming. I think we just came up with what the “69-knuckles” handshake greeting would be on set; Josh and I practiced it a few times, and came up with the best choice that was not too rude, but just weird enough that it was uncomfortable.

ShockYa: You get a chance to really cut loose with Joy. She’s a breath of fresh air, but there’s also a certain pathology informing her behavior. In preparation, do you spend a lot of time concerned with what’s informing the behavior or do you just more get lost in playing the free spirit?

LB: I think it’s more of the latter, rather than doing deep psychological analysis. When I auditioned for the part, Carlo (de Rosa, director) said he thought I was the most “Joy” between takes, when I was just laughing and being myself. So I really took that to mean that I didn’t have to do too much thinking about it, and just be fun and be present. It was to just enjoy myself as much as possible. Joy is very spontaneous, and her filter is certainly on a lower setting than most people’s.

ShockYa: But everyone has a friend known for speaking their mind in perhaps inappropriate ways. Did you reach back to someone specific in your past for inspiration, or was it all already there on the page?

LB: That’s a good question. I didn’t really have anyone in particular in mind when I was thinking about the character of Joy, but when you asked that right now Kate Winslet’s character from “Eternal Sunshine of the Spotless Mind” comes to mind, because there’s an unpredictable quality to her. …And there’s the funky hair connection, too.

ShockYa: Yeah, since we mentioned the hair, were those extensions you wear or did they get you to go for the multi-colored dye job?

LB: It was extensions. Originally it was written that my hair would be different colors — at first Joy would have red hair and then blonde hair, but the hair and make-up work that would require on an indie film is just too daunting so (we settled on) extensions.

ShockYa: That’s interesting — it’s like a physical manifestation of her unsettledness.

LB: Yeah, she’s definitely someone who’s lost and searching — like a teenager. Teenagers go through those fashion changes in high rotation, and it’s because they’re groping for some kind of identity. Not that we ever stop doing that, but it’s amplified in teenagers, and because probably it’s a strong adolescent part of Joy. She hasn’t matured yet. Maybe the film is about her growing up as much as it is about Kyle growing up.

ShockYa: Without giving anything away, Joy has an unusual superstition about cat pee. Do you have any superstitions that you hold onto, whether they’re urine-related or not?

LB: Oh, that’s an interesting question. Ummm… I have to think about this. (pause) Not really. I find astrology really interesting, but I’m not superstitious. I won’t say who, but a friend of mine works with crystals, and the belief that different crystals emit different energy fields and represent different strengths and — this is very Joy, I should have done this (in the movie) — she actually keeps different crystals in her bra. (laughs) I admire that conviction in something unproven; that’s a magical way to live.

ShockYa: What do you enjoy doing in your free time?

LB: I have this website called Crankytown that I created with two other actors, and it’s an online world dedicated to menstruation. So it’s all about periods, and our main audience is women 20 to 40. There are lots of first-period stories on it, and original content that we direct, and films that some of our celebrity friends contribute. There’s a great story from Jessica Paré, and Ryan Cartwright, and stuff from Feist and Emma Thompson. That’s my labor of love. We have a film festival called Crankyfest, and our next deadline is October 15. And right now we’re editing a video starring Jay Baruchel.

ShockYa: Wow, so plenty of guys contribute too.

LB: Yeah, well (Jay) has a mom and sister. Anyone who has a mom or sister or daughter or girlfriend has a period story too — Crankytown is for men and women. It’s to de-taboo menstruation.

NOTE: In addition to its theatrical engagements, “Finding Joy” is also available on VOD. For more information, visit www.FindingJoyTheMovie.com. 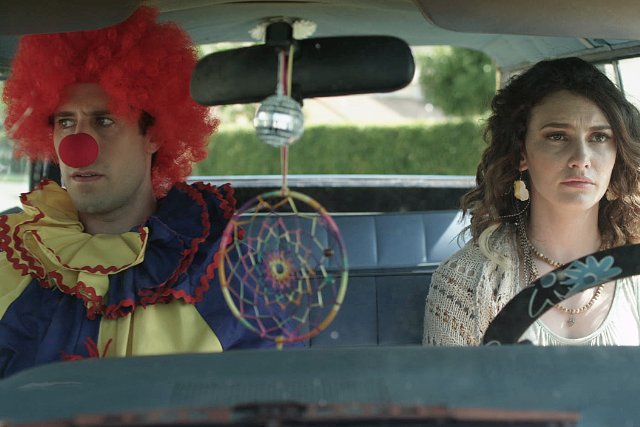