Title: When Comedy Went to School

You’re intimidated by Aristotle, Socrates, Plato, Bentham, Russell, and Nietzsche. You think their writings and dialogues are too difficult to understand or even irrelevant to our times. But you want to know the answer to the most basic philosophic question, which is “how should I live my life?” So what do you do? Simply memorize this: “We’re all going to die, so we might as well laugh until we reach that transition.” That’s just one of the bon mots of Mevlut Akkaya and Ron Frank’s fascinating documentary, “When Comedy Went to School,” a look back at the careers of some of the all-time greats on the American comic scene, particularly through the shows belted out in the Catskill Mountains during the mid-20th Century. The 1950s may have been the dullest decade of that hundred-year period, the age of conformity, rigidity and repression, but you could count on the top comics to get us to laugh through the times of the The Man in the Gray Flannel Gray Suit.

“When Comedy Went to School” does not attempt the breadth and excitement of the “That’s Entertainment” series which covered American musicals on the screen, but instead focuses on the Golden Age of Comedy, which Akkaya and Frank find in the all-but defunct Borscht-Belt hotels, largely abandoned when its patrons found more variety in travel to Europe, or if not so adventurous, to the remote on their TV’s where Seinfeld became the leading sit-com star of our own time. If the majority of comics on this Catskills adventure are Jewish, there’s a reason. Jerry Lewis, Sid Caesar, Jackie Mason, Mort Sahl and Jerry Stiller among others catered to people who were either not accepted in the Christian hotels (see “Gentleman’s Agreement”) in the area, or would not feel comfortable with folks who, as Jackie Mason once said in a live show I attended, “Protestants would greet each other with ‘Go for a drink’?” Jews would rather eat than drink, and the Catskill Hotels allowed patrons to order doubles and triples—and they wanted.

Hotels like Grossingers, Kutschers, the Concord, Laurel in the Pines, all upstate New York within a short radius of one another, would provide the site for comedians like Woody Allen, who did one-man shows; Jerry Lewis, Sid Caesar and Jackie Mason. Akkaya and Frank treat us to interviews with these comedians who are now well into their Social Security payments (Jerry Lewis is 86) and cut through bits and pieces of their acts in front of full-capacity crowds. As for why these audience members opted for the clean air of New York State rather than the treasures of Europe, as one wag says, in Europe, that’s where people got killed. We escaped from there. Why should we want to go back? There’s a type of Jewish humor that laughs at tragedy, just as Mel Brooks would do a song-and-dance about the Inquisition.

“When Comedy Went to School” just might appeal to a Jewish audience most, but given the popularity in recent times of Jewish humor, perhaps these is universality after all in our funny bones. 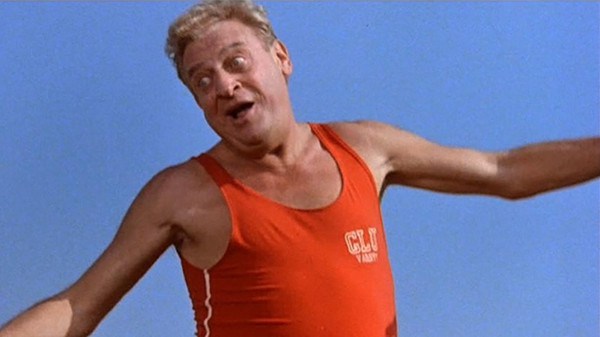