I got to speak with Stunt Coordinator Steve M. Davidson about his love of all things fast and dangerous. He knows how to take any vehicle to the limit as the man behind the action of A Good Day to Die Hard, Bad Boys II, and From Dusk Til Dawn, and shows like Deathproof, and Sons of Anarchy.

What was your background before you got into stunts?

I raced motorcycles, a little off road car work, skier, karate. A little bit of everything, motorcycles mostly.

How important to you is it to use practical stunts and effects over digital and how does that effect things on a production?

Our approach on his film was to do everything practical as far as we could do it. We did a pretty good job of keeping most of it real except for a few little pieces with the helicopter at the end because of the size of that, it’s digital in the part when it goes out of control. CGI is helpful sometimes in stunts but sometimes I really don’t like the way it looks, and I think everyone has come to that conclusion.

You guys built the world’s largest green screen  for this movie, how did having that in your arsenal change the way you could approach shooting?

We had our own highway, we had our own bridge, the green screen was built for so that they could put Moscow in the background. It was a controlled area which meant we didn’t have any traffic problems, we didn’t get people upset waiting for us to hurry up and finish on the streets. Plus we got to turn cars over and blow trucks over, and jump over vehicles, all sorts of cool things you wouldn’t have as far as agility on practical highways.

There are some pretty tricky scenes that take place in an iconic section of Moscow. What’s the biggest considerations when shooting in overseas locations?

The look of Moscow is really distinct. The look of European is so different than anything in the United States. It was really important to shoot footage there to be able to make it have the right feel, you really can’t simulate that the same way here.

What is the difference for you in getting to shoot for action film like this over a TV show, like Deathproof or Sons of Anarchy?

A movie like this is willing to spend time and the money needed to perform these kind of big stunts. To pull off a 7 minute car chase takes a lot of planning, takes a lot of prep. You test a lot of things so that they work when you get out there on the day, you don’t have a chance to be able to do it 2-3 times, you’ve got to get it done once. The extra money helps for the big action stuff and time.

Bruce Willis is such a veteran of the action world, how did Jai Courtney do with his action scenes on set?

He’s actually not just one of the nicest guys, but a really gifted athlete! He can watch something and almost pick it up instantaneously, which is a real sign of a focused person with natural ability. He was a real pleasure to work with.

You guys pull off some pretty crazy things in the movie, like the grid-lock chase, were there any things that you had wanted to see happen that couldn’t make it in the film?

The car chase went through quite a few iterations, there were a couple of big stunts we had thought about doing but they would have ended up taking too much time.

What was one of the most technically satisfying stunts you were able to pull off in the movie for you?

The sequence jumping out of the hotel and going through the construction site all the way to the bottom. That we pulled off pretty quick, as soon as it was built we were shooting on it. We did sections of the building all the way down to the bottom.  All of it I think it came together quite well.

What other movies are coming out for you soon?

I just recently did work on Captain America 2 which will be out later.

Check out the Blu Ray to see lots of extras including a featurette about shooting the massive steel-crunching 7 minute car chase scene! A Good Day to Die Hard stars Bruce Willis, Jai Courtney, and Sebastian Koch and is Directed by John Moore. Available now. 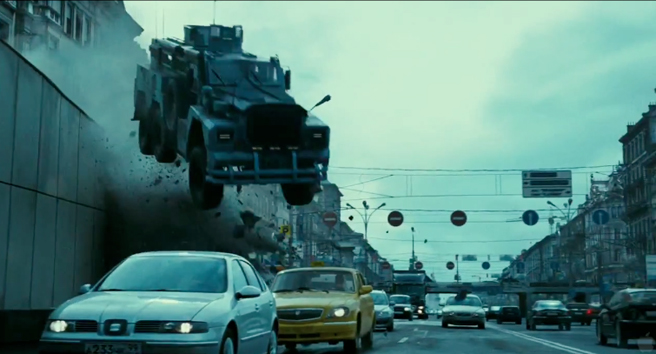