The summer premiere of “Switched at Birth” airs tonight at 8/7c and ShockYa has some tidbits about the series, straight from “Switched” star Constance Marie! Read below to see what you can expect from Marie’s character, Regina, this year as well as an update on Marie’s hand injury.

On Regina’s relationship with Bay:

“That’s one of the great things that happens right when the show premieres is Regina comes out rehab and realizes that how things were before are not going to work for somebody who is in rehab. She ends up living — or residing for a short while anyway– at Angelo’s house, and somehow the way that [Executive Producer ]Lizzy Weiss wonderfully works it out, they end up living there also; and so the entire Vasquez/Kennish family, but the Kennish being Bay this time, get to know each other and live together in the Vasquez house.”

On her ability to sign this season, despite her hand injury:

“Well, the thing about that is they’re still not what they were and every once in a while I try it out and the problem that this kind of injury, it just flares up and you use your arms so much in life just normally besides the sign language, so I think it’s going to be a bit longer. I keep asking with my doctor and the problem is he’ll say we don’t know yet until it goes away because it just has flare-ups; and you can’t stop the flare-ups without stopping the activity that’s making it flare up, and in this case being the sign language, so unfortunately not yet. I’m hopeful. I’m very hopeful. I’m a very strong woman and I just hope that it’ll come back soon.”

On Regina coming out of rehab early:

“I think what happens is Regina realizes how much her rehab stay has sort of added to the disconnect between Daphne and her. She realizes that she’s missed so much time with the girls as it is that her coming out early to honor a tradition that she and Daphne had ends up being a mistake; and she has to remove herself again. That’s why she ends up at the Sorrento house, Angelo’s house, for a while because she just made a mistake and it was too soon. But she is clearly on the path of trying to stay sober, so will do anything including moving in with Angelo if that’s what it takes to stay sober to get space from the Kennishes.”

“Oh my goodness. I swear I’m envious of my character’s life. She has so many beautiful men everywhere… We focus more on Regina’s rehab. One of the things that are great this season is before it was all about Daphne and everybody getting to know Daphne and the struggles that Bay and Daphne had together, but this is really a chance for Bay and Regina to connect and to explore that relationship, which was really not touched on in the first season at all. The dynamic of that and we include Angelo into that and all of us living together is really and truly an amazing, amazing dynamic that gets to be explored. Also the thing is Ty is back; Blair Redford is back on the show by popular demand. They get to explore those relationships, that relationship and him and his PTSD and coming back from war. It’s really, really amazing how dynamic the show is even still.” 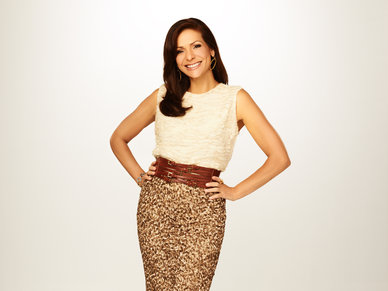