Perhaps it’s only natural, given their often larger-than-life personas, but professional wrestlers have been among the biggest beneficiaries of modern-day “branding” and branching out in the entertainment world. World Wrestling Entertainment, or the WWE, has smartly tabbed a number of its rising stars for movie properties. Among the latest to test the acting waters is nine-time world champion Randy Orton, who takes his first crack at a starring role in “12 Rounds 2: Reloaded,” a discretely plotted sequel/spin-off to 2009’s “12 Rounds,” starring John Cena. In the movie, Orton plays Nick Malloy, an emergency medical technician who finds himself locked in a “Saw”-like game of cat-and-mouse with a vigilante tied to his past. For ShockYa, Brent Simon had a chance to talk to Orton recently one-on-one, about acting outside versus inside the ring, his wrestling family roots, and his tattoos. The conversation is excerpted below:

ShockYa: Wrestling obviously takes a lot out of you physically, but its action exists in a longer form. The action in movies can be very intense, but it’s often shot in bits and pieces. How did you take to that change — was it hard to keep the adrenaline up?

Randy Orton: It was two completely different things for me. The stuntmen loved me because I was wanting to do everything. There were only a couple stunts that I wasn’t allowed to do myself. Short little takes are how a lot of directors would piece a scene together — and spend days and weeks on a fight scene. Roel Reiné, our director, spent five hours on a fight scene where I fight two cops. It’s not the longest fight scene — it’s about a minute or a minute-and-a-half (in the movie). It’s really cool. Even though it’s take after take, we shot for a long time. That was all we did that day. As a matter of fact, I think that was our first day. Roel knew that beating up the stuntmen and kicking them in the face would probably be a little easier for me, and less stressful (laughing), than any of the real heavy acting stuff. So he was warming me up. But I was a lot more dressed than I am when I’m working in the WWE. There are lots of differences. Usually I’m wearing my little tights out there, and on the movie I’m dressed (with pads). And I had the EMT outfit, which also felt really awkward. But I had to feel like an EMT. The few hours of acting classes that I was able to get under my belt before this movie definitely helped me try to get as comfortable as I could playing the character I was playing.

ShockYa: You mentioned jokingly the stress of some of the bigger acting scenes. But when you’re wrestling there is definitely an element of performance — it’s just that you’re playing big dramatic moments to a crowd, in the round. How do you take that experience and shrink it down to acting for the camera?

RO: Like you said, in the WWE ring, with viewers at home, I’m working toward five, six or sometimes even seven cameras at a time, where I know that at any time one of those cameras could pick me up. I’m also working to the people that are sitting up in the rafters — well, there’s no such thing as a cheap seat, but I’ll say cheap seat for now — because I want them to see every little thing I’m doing. So things in the ring are definitely bigger, so that you can see them. But the movie world is completely different, and you have to hone things down because when that camera is so tight on you and so intimate and right up in your face, it’s going to catch every little thing that you give it, and it’s very easy to overdo it. I think the best advice I got is that acting isn’t acting — you just want to just be, you want to be just real, be in the moment and react. If I’m in there with someone like (costar) Brian Markinson, who’s been around and knows the ropes, I need to be able to react off of him. But I was surrounded by great actors, and even some of the lesser known actors in the film were fantastic for me to work with. They were light years ahead of me as far as knowing what to do in that world. If they were in a WWE ring they’d be lost and yeah, I’d have to help them, but here I needed their help. I approached it like that, very humble, and just said, “Hey guys, I’m a first-timer, so please help me.” And of course they want the movie to be as good as possible.

ShockYa: You come from a wrestling family, so was it always a foregone conclusion that you were going to go into wrestling?

RO: Yeah, basically I grew up in the business. I didn’t see myself following in my father’s footsteps, but everyone around me did, you know? When I was at school that was a common question, or assumption. The older I got, the more people would ask. But I just never had the confidence in myself to believe that I could be capable of doing something like that. These guys that my dad brought around the house when I was young were just larger-than-life, they were giants. When you have Andre the Giant sitting at your dinner table, who is a real giant, it’s almost like a fantasy land. If you grow up as a wrestling fan like I did, and like all of us did in the WWE locker room, it’s cool to actually have those memories — where as a fan I actually got to eat dinner with these guys. Bret Hart babysat me while my father went and wrestled when I was on the road with him. These guys treated me like family. But no, I never saw myself following in my father’s footsteps. It wasn’t until I went into the Marine Corps when I was 19, or 18, rather, and I realized that wasn’t for me. I got a bad conduct discharge, was at home for a few months in late ’99 and basically said, “Dad, I want to give wrestling a shot. I sure as hell don’t wanna go to college and the Marine Corps wasn’t for me. And I need to make some money, so let’s see if I can do it.” He made a few phone calls, and luckily still had some connections. Guys like Jack Lanza, Pat Patterson, Bruce Pritchard, Tom Pritchard — those guys all helped me get a tryout. And I’d never been in the ring, so they went on a lot of faith and signed me and thought that they could help mold me into a WWE superstar. And now I’m glad they did, because that was a big turning point in my life.

ShockYa: Are you at a point now in your career where this film feels like a similar pivot point?

RO: Yeah, kind of like Dwayne Johnson, and the route he’s gone? He’s still around the wrestling world and that’s his first love but the moneymaker for him now is movies and that’s where his heart lies now. I would love for that to happen, I would love for that to happen. But as an actor can you compare me with the Rock? Hell no, hell no. I have a long way to go, and I know that. It’s one thing at a time, and we’ll see how this movie does. And I need some more acting classes before any other movies. I know that. But I want to see how this movie does and see if people think I have that potential.

ShockYa: Tell me a little bit about the tattoos — are you a guy that gets little pieces that relate to specific events, or do you just have the big (sleeves)?

RO: Yes and no. When I first started getting them I was just a kid that wanted a tattoo. I wish I could tell you that they all meant something. Later on, I think it was in 2008, when my daughter was born and I also had a tough injury that put me out (of wrestling) for five months, I had some time there to get some tribal stuff to cover up the United States Marine Corps. I had some stuff that I had to fix tattoo-wise, and had the time to get it done. When you’re on the road you can’t really get them done and expect them to heal properly because you’re banging and beating on them and that’s not good for a tattoo to heal. So it was then that I got the majority of these sleeves that I have now done, and it was basically just filling in the blanks in between all the tribal that I’d gotten early on. And all the stuff that I got in ’08 made sense, there were definitely reasons for it. That was my main goal — to be happy with the tattoos that I’d started getting when I was 18 and wasn’t necessarily that happy with then.

NOTE: “12 Rounds 2: Reloaded” is now available on Blu-ray/DVD combo pack, loaded with a variety of bonus features, including an audio commentary track and various featurettes. 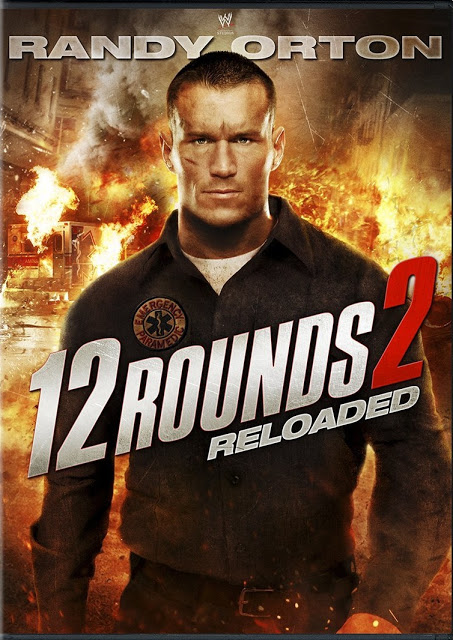