Evincing a mood and rooted sense of place more than a dynamic plot, writer-director Aaron Douglas Johnston’s “My Sister’s Quinceañera” digs into its creator’s familiarity with his hometown of Muscatine, Iowa, in telling a coming-of-age story of hazy ambition. Comprised of a cast of non-professional actors, this lovingly constructed, work-shopped piece of cinema offers up a refracted glimpse of the fits and starts of rural dream-fires.

A North American premiere and Narrative Competition selection at the Los Angeles Film Festival, “My Sister’s Quinceañera” centers around recent high school graduate Silas (Silas Garcia), the involuntary man of a household of mostly women. As his family prepares for the all-important 15th birthday of Elizabeth (Elizabeth Agapito), and his mother (Becky Garcia) dotes over her, Silas juggles dreams of leaving his hometown with a nagging commitment he feels to his younger sister Samantha (Samantha Rae Garcia), with whom he is much closer, and an attraction to neighborhood girl Nicole (Nicole Streat).

Dreams of busting out of two-star towns — and the familial and/or romantic friction such aspirations produce — are of course rich cinematic terrain, but “My Sister’s Quinceañera” largely eschews outwardly manifested conflict and instead focuses a lot of that energy inward. There are chats and smokes Silas shares with a kick-around buddy, but for most of the film Silas doesn’t talk with his mother or sister about plans to leave Muscatine, because he’s not even sure in his own mind that he’s ready or wants to.

To this end, it helps that Johnston (“Bumblefuck, USA”) has an eye for detail that conveys multitudes around the story’s edges: mischievous puppies and fat, soda-drinking kids lurk in frames, contributing to an easy, unforced naturalism. And in one brief scene, never much touched on again, Silas’ mother has a Skype chat with her imprisoned beau. Moments like these feel organic, and assuredly of a piece. There’s a sense of observation that would make a nouveau Norman Rockwell proud. Sometimes, however, “My Sister’s Quinceañera” engenders frustration. While it touches on socioeconomic resentment and curiosity — in the moment most freighted with tension, Silas and his friend rather naively enter the unlocked house of a well-off family — the film doesn’t really root down into what Silas’ adolescent life has been like, and thus what he would be leaving behind if or when he leaves tiny Muscatine for Iowa City or another larger city.

It’s interesting, too, that while “My Sister’s Quinceañera” offers up a pinch of cultural specificity, it doesn’t really delve into its titular celebration. (It ruins nothing to say that the movie builds to that moment, without showing much of it.) Johnston’s film is obviously informed by some of the real-life feelings and dilemmas of his cast, whom he met in a two-week acting workshop he taught. That quality gives it much of its delicate charm. (Garcia is especially great — a gentle giant.) It also means there’s a certain ceiling here, however — a lack of cathartic payoff. Maybe that’s actually much of life, though.

NOTE: For more information on the movie, visit www.MySistersQuinceanera.com. 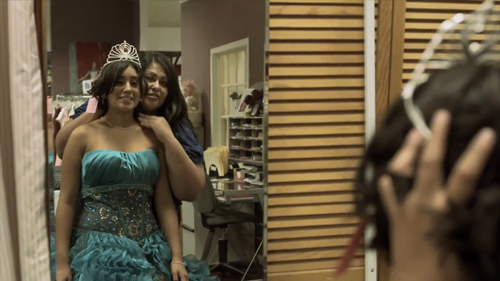 Cancel reply
Sharlto Copley Gives His Two Cents On His Upcoming Films ‘Elysium’ And ‘Oldboy’
Interview: Jason Statham Talks About His Role in Redemption
To Top