The whole gang is back – and then some. Gru’s (Steve Carell) living the dream, playing happy homemaker and loving dad to Agnes, Edith, and Margo, (Elsie Fisher, Dana Gaier, Miranda Cosgrove) until someone zaps him with a taser (or, more precisely, a lipstick taser), snatches him right off his front lawn and stuffs him in a car trunk. When he’s released, Gru comes face-to-face with his abductor, Lucy (Kristen Wiig), and learns that he’s been taken to the Anti-Villain League (AVL) headquarters. AVL head honcho, Silas Ramsbottom (Steve Coogan), explains that someone made off with an entire top-secret lab. They’ve got a short list of suspects, but the problem is, they can’t pinpoint the villain so having been a villain himself, they recruit Gru to get the job done.

It’s easy to jump right back into this world courtesy of an opening sequence that appropriately highlights the film’s prime assets – Gru’s relationship with his girls and those crazy little minions. In mere minutes you’ve laughed out loud because the minions’ giggles are infectious and have gotten that warm and fuzzy feeling when Agnes admits she knows her birthday fairy princess’ secret identity, making this an ideal and very necessary jumping off point for a film loaded with unforgettable moments, but also with an underdeveloped through-line.

Lucy is a highly amusing and likable character, but the AVL and the detail’s of Gru’s mission are tough to track. Younger viewers will go unfazed, but for adults craving an escalating narrative, the effort to track down the villain responsible for the lab heist isn’t particularly convincing or suspenseful. In fact, by the end of the film, you’ll likely have forgotten the whole thing even began with the disappearing facility. It is the inciting incident, but then there’s a mystery to be solved in a mall, Gru’s beef with El Macho (Benjamin Bratt), and disappearing minions. It’s easy to piece together when you hit the film’s climax, but while experiencing the rest of the film, it’s too tough to connect the dots to appreciate certain scenes in the moment. But fortunately, the characters of this world are so lovable you’re willing to watch them do just about anything, even if it doesn’t make much sense.

Yet again, dad Gru is significantly more engaging than villain Gru – or, in this case, villain-turned-AVL agent Gru. Per usual, Edith is in the background acting like a ninja or doing anything but what typical young girls do, but Gru has connections to Agnes and Margo that are rudimentary, but also so sweet and relatable that you’ll love him as much as they do. Now that Margo’s older, priority #1 is finding cute guys. As an overprotective father, Gru isn’t happy about it and when he tries to sabotage Margo’s relationship with Antonio (Moises Arias), you’re caught between wanting to see her get what she wants and wanting her to stay Gru’s little girl, turning what initially feels rudimentary into a thoughtful subplot.

While the components of Gru’s AVL mission are disjointed to say the least, the connection between his love life and family life are pristinely woven together. Agnes is basically foaming at the mouth to have a mother, but rather than pick a single route to expand this portion of the story, screenwriters Cinco Paul and Ken Daurio give the scenario much more weight by showing Agnes coming to accept Gru as a single parent while also showing Gru slowly fall for Lucy. One angle gives the other an essential boost, putting both storylines on a path to a highly satisfying collision.

However, it still doesn’t matter how poignant the family component is. If there are minions, they’re bound to steal the spotlight. You’d think you’d grow tired of their constant babbling and silly antics, but the minions have such a warped way of saying and doing everything that the possibilities are endless. They’re cracking jokes and functioning as the butt of many from beginning to end. All they need to do to keep the laughs coming is just jump into another everyday scenario and ham it up. With so many options – minions cleaning the house, minions extinguishing a fire, minions relaxing at the beach and more – it’s endlessly amusing, yet again proving they deserve their own feature.

After “Despicable Me 2,” hopes are higher for “Minions” than “Despicable Me 3,” but that’s not to say this sequel didn’t earn a subsequent installment. It isn’t as effective as the first film and minions have proven themselves to be the franchise stars, but Gru and the kids are still instant charmers and have all the potential in the world to come around for another go. 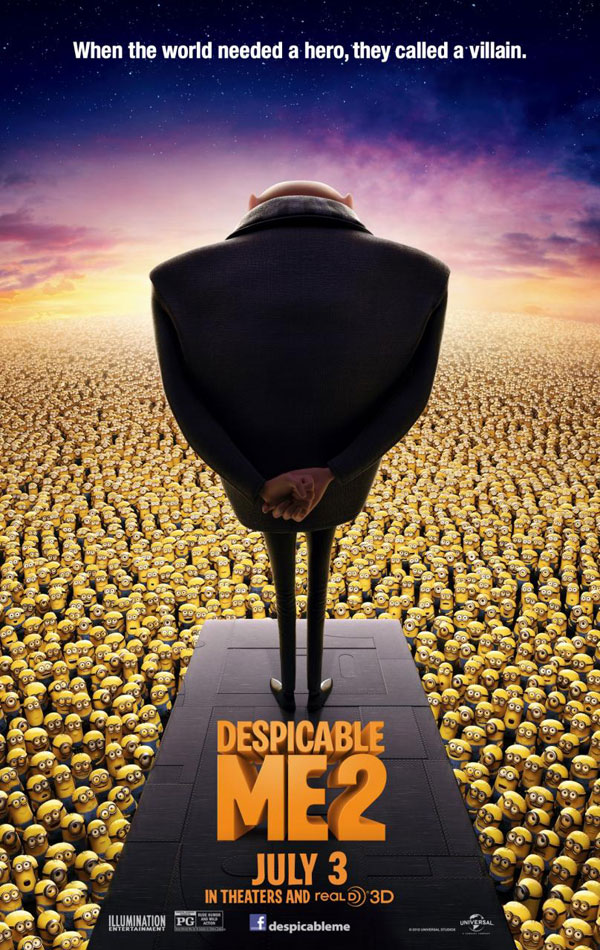