Summoning up unnerving visions of an inevitable American remake starring Josh Duhamel or some similar Haircut, lukewarm French comedic trifle “The Stroller Strategy” indulges in hoary gender clichés in lieu of interesting characterizations. Directed by Clément Michel, the Paris-set film tracks along the same lines as “Life As We Know It,” “What To Expect When You’re Expecting” or the French source material for what in America would become “Three Men and a Baby” (minus two guys, of course), but hopelessly conflates amiability and ambiguity, making for a shrug-inducing experience.

A year after his girlfriend Marie Deville (Charlotte Le Bon) dumps him, irresponsible manchild Thomas Platz (Raphaël Personnaz) bumbles his way into temporary guardianship of a baby. At the advice of his friend Paul (Jerome Commandeur, playing the Rob Huebel or Rob Corddry role), who contends it’s a chick magnet, Thomas pretends to be the child’s father. When he reconnects with Marie, he keeps up the ruse, in a sideways attempt to woo her and convince her that he’s ready to settle down and commit.

Nevermind the contrived nature of its set-up. There isn’t exactly what one would call a small target for “The Stroller Strategy.” It pretty much aims at the side of a barn, in unsophisticated fashion. No mortal sin, that, however; the movie would be fine if it either committed to an even more mannered, farcical tone or had more convincingly sketched, fully dimensional characters. As rendered, though, Thomas and Marie are just types — doofus guy hung up on ex-girlfriend, and girl impressed because she believes he’s implanted his seed in some other chick — and implausibly tethered at that.

The script, meanwhile, cycles through yawning, familiar bits (changing a diaper, riding a bike with the baby) without ever really putting much of a fresh spin or stamp of personality on the proceedings. There’s a paucity of ideas here, as well as an uneasy, ill-defined paradox in the fact that Michel denotes Thomas’ air-quote maturation through the indulgence of paternal cluelessness. Meanwhile, Personnaz and Le Bon are each attractive, but they seem to smile and past one another; there’s no palpable chemistry here, spirited or otherwise.

As the first release for Rialto Premieres, an offshoot of the New York-based classic film distributor Rialto Pictures, “The Stroller Strategy” would seem to augur a desire on the part of its Stateside peddler to branch off a bit from more strictly defined arthouse fare, and eat into the sort of upscale, populist-aimed foreign film boomer comedy market that Fox Searchlight (“The Best Exotic Marigold Hotel”) and Sony Pictures Classics (“I’m So Excited!”) have been trying to reestablish as a commercial beachhead recently. That would be a welcome mission, in my opinion — the wider dissemination of more comedic, mainstream-friendly foreign films. Michel’s effort, however, hopefully won’t prove a high-water mark. 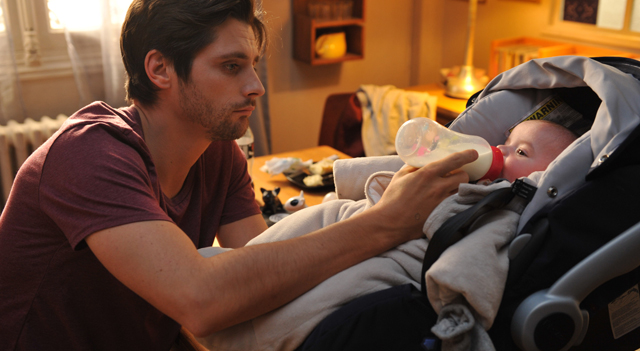