In 1999, after an infamously turbulent development process that saw its script get snapped up and then cruelly jettisoned by Miramax, “The Boondock Saints,” a revenge flick about two avenging-angel Irish Catholic twins, Connor and Murphy McManus (Sean Patrick Flanery and Norman Reedus), who cut a swath of retribution through Boston’s criminal underworld, came and went in theaters in barely the blink of an eye. On the nascent digital home video format, however, it became a huge if unlikely hit. A decade later, its writer-director, Troy Duffy, got a chance to make a sequel, “Boondock Saints II: All Saints Day,” that continued the McManus brothers’ story. This week, an exclusive director’s cut of the movie on Blu-ray hits Best Buy, with 27 minutes of re-inserted, never-before-seen footage, two audio commentary tracks, deleted scenes, seven behind-the-scenes featurettes, and more. For ShockYa, Brent Simon recently had a chance to talk to Duffy one-on-one, about the cult appeal of his franchise and what else he’s working on next. The conversation is excerpted below:

ShockYa: The “Boondock” films have a storied history, lots of ups and downs. In the process of leading up to shooting the sequel, was the idea of the director’s cut something you already had in mind, just given how much more expansive the story is?

Troy Duffy: Yeah, that kind of developed during the editing process, actually. The first rough cut of this was probably three hours or so, and you have that first special cut that you really wish you could release, but then that’s too long. I picked the cut that I liked and went with that.

ShockYa: I’m reminded of the line from Billy Joel’s “The Entertainer” — “If you’re gonna have a hit/You gotta make it fit/So they cut it down to 3:05.”

TD: Yeah, I also believe that there’s kind of a point — you know, very few movies that are over two hours have hit home with me. If you have a two-and-a-half or three-hour movie that feels like two hours, then great, it can take that weight and that time. The first “Boondock,” for instance, was a hour and 45 minutes, in and out, quick and tight, and we cut things out of there that even to this day kind of irk me, but it was better for the overall experience. And then (on special editions) you can mess around with longer cuts — it’s almost like when a band does an extended version of one of their songs.

ShockYa: Yeah, having a music background like you do, it must be like the studio version and then the live concert jam. Amongst the extended footage new to Blu-ray, what really stood out as most notable? The fantasy sequence with Julie Benz is longer.

TD: Sure, that and a couple jokes here and there. And more with Cliff (Collins), as Romeo, and a portion of a sequence in Ireland where they kill a wolf that’s attacking a herd and then burn it. Some of it was like a knife in your back having to cut it to begin with, so with the stuff like that I tried to save it for the director’s cut, and I was happy to get it in.

ShockYa: To what do you attribute the film’s success and brand loyalty? There’s been plenty of movies that have told stories of vengeance, but there seems to be a certain energy around these films.

TD: Wow, when you talk to fans — because I’ve asked that question myself quite a bit — you try to figure out why they continue to not forget this movie. I read what they write on the websites, and I commune with them quite a bit and ask them questions, and about nine months ago I asked fans and got thousands of responses. A lot of them were like, “Ahh, it’s kick-ass!” and a lot were deep and well thought-out. So what I’m gathering is that it’s several large factors: it’s the relationship between the brothers, the characters themselves — people really like those characters, plus the actors, Norman and Sean, who brought them to life — and then also the relationship with Rocco (David Della Rocco). People all have that friend in high school who’s down for everything, like a little puppy dog, and really isn’t as cool as everyone else. And then the very simplistic idea that they kill bad people just because they’re bad people — not because they’ve necessarily been wronged personally by them. I think that taps into a frustration that we have and have always had in society. When (the original) “Boondock” came out it was sort of right after the whole O.J. Simpson thing and it was sort of at a fever-pitch, this notion that we’re sick and tired of our ineffective judicial system and law enforcement. It tapped into that. Everyone has that fantasy, where if something happens in your neighborhood, you’re not a hero if you call the cops, you’re a hero if you grab a two-by-four and go out on your front lawn. Everybody wants to do that in their hearts, from guys like me to your grandmother — everybody’s got that fantasy at one time or another, to take care of it themselves and do the right thing just because it’s the right thing. So it taps into that and probably 17 other things that we don’t have the time to get into. There was a lot to it, that’s what I found out. What really messed with my head was when Sony actually paid for a demographic study to be done and it turns out that our fans split 50-50 between male and female. And (the guys and I) had noticed it from doing college speaking engagements and meeting the fans at Comic-Con and stuff — 50 percent women. You would kind of cock a brow at, because this is such a quintessentially male film, the first one. There’s barely any women in it, and it’s fucking good-looking guys killing bad guys with guns, so you’d figure it’s a male-driven thing. The fact that we had 50 percent female fans kind of didn’t make sense to all of us even though we were very happy about that, believe me. We would always ask when we saw them, and instead of something like, “Oh, they’re sexy — cute Irish guys with guns being badasses!” we’d get these very in-depth responses. And I think there’s a little bit of a sub-culture out there, where I think a lot of women are a little sick of this weak-minded male-driven society where we want to talk about everything and share all of our feelings. Every now and then I think a woman likes to see a man stand up and do what he believes in, no matter how hardcore it is. And that was the sense I was getting from some women fans (about the movies).

ShockYa: The monologue in the opening on “Boondock II,” about the difference between talkers and doers, seems to offer up a metaphorical parallel between the film and your situation — in some alternate universe, if “Boondock Saints” came out in a wide theatrical release and merited a sequel on a more conventional track, it struck me that that film would likely be a lot different than the “Boondock Saints II” that came out in 2009. It felt like this film was in some respects a chance to set right the record on the first one, if you will. Is there anything to that?

TD: Well, there’s a lot to that question. The actual making and editing of “Boondock” was a great experience. There might have been some sour stuff going on in the industry and other things, but the making of the film was a joy. I remember Rocco came up to me one day on set and said, “Man, I could just shoot this film for the rest of my life.” We were all having so much fun. I thought, “Wow, that’s true for me too.” I think most of the set felt that way. It was very different on the second one. We had a lot more to do, a lot less time, technically less money — it was a grueling shoot, but we still managed to have some fun. But it’s almost how they say a musician can’t listen to his own music. I can’t really watch (either) “Boondock Saints” and not think about those specific days from the shooting. It’s not really a perfectionist thing, but it’s like, “Oh, we missed an opportunity there,” or “Boy, we really nailed that.” I look at them unlike a fan, of course. In terms of exorcising some demons, sure, I certainly did — in a lot of ways. And right now I’m writing “Boondock III,” so I’m sorry if I’m a little flighty but my head is so deep in that story right now.

ShockYa: Are you looking to shoot anything else before “Boondock Saints III” or is that your main priority?

TD: There’s a couple things on the horizon. I’m signing a deal to write a television pilot based on an idea of mine for Sony, and that’s exciting. It’s basically based on a historical figure, a turn-of-the-19th-century pirate. And there’s some heat under another project called “The Blood Spoon Council.” So I have a lot of work to do, but I have a bit of a window of time to concentrate on “Boondock III” and so I’m writing that now. And that story is coming really well — it’s strange, too, because it almost gets into a comic book-y, extreme thematic thing. If you think about (where the story ends), here these guys are in prison, there’s a rogue FBI agent who faked his own death, two of them really now, and the Catholic Church is ready to help out. It’s like, if we get them out, these guys are now assassins backed by the Catholic Church and controlled by two rogue FBI agents — it sounds like the plot of a comic book, you know? That was my fear — have we gone too extreme, how do we wrestle this beast down? And I’ve found a way to deal with that that makes sense and adds to the story, and I think the fans are going to get a lot of answers to questions that they’ve had for a long time about the brothers. This film is more introspective in terms of those two characters, and very focused on them. That’s the way we’re going, and so far I’m very pleased with how it’s coming. 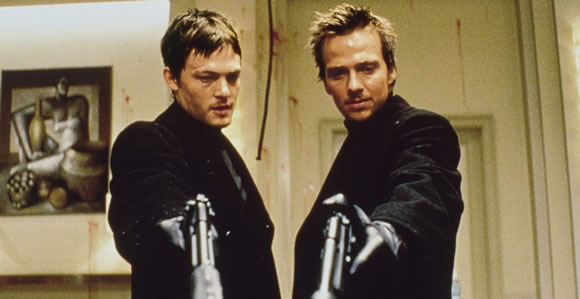