An idol to rappers like Ice-T and others, the late Beck would help birth the Blaxploitation film genre with a series of bleak, gritty and at times jarringly poetic novels that captured the brutality and viciousness of the pimp’s lifestyle — works deeply rooted in his own experiences. Sadly if somewhat unsurprisingly, he suffered a traumatic upbringing. Beck’s father left his mother, who then in turn left the one man who provided stability in his life, his first stepfather, for a philandering and abusive con man; Beck was also sexually abused at a young age by a female child caregiver. He would matriculate at Tuskegee University for a brief time, before turning to pimping and other endeavors, and settling in the south side of Chicago.

After years of heavy drug use and a couple stints in prison, including one for armed robbery, Beck would eventually mellow in his 40s. He moved to Los Angeles, briefly reconnected with his mother before her death in 1962, and worked for a while as an exterminator while becoming a family man (of a sort) with wife Betty and four kids. It was Betty that first started transcribing some of his digressive monologues about his pimping days, and turned Beck on to Holloway House, a publishing company looking for writers who could speak to “the black experience.”

In older interview clips Beck talks about the (phony, assumed) glamour of the pimp lifestyle, and how the life of a pimp is one of unremitting pressure and tension, playing God to a cabal of broken women living in his refracted glow (“It’s got to be holy hell” he says of a prostitute’s life). With its roster of recognizable talking heads (Ice-T, Chris Rock, Don “Magic” Juan, Henry Rollins, and others), “Iceberg Slim” (one of Beck’s nicknames) also sketches out the sense of communal respect accorded pimps and lionizes, rather uncomfortably at times, their skills of psychological manipulation (or, as interviewee Snoop Dogg puts it: “You can’t just dog a woman out and gorilla pimp a bitch to death — there’s got to be some compassion and tender loving in there”).

While it doesn’t outright deny it, “Iceberg Slim” skirts around the chaos of its subject’s family life, and certainly his history of violence perpetrated against women. The question of how deep a scumbag’s amends must run hangs uneasily over the entire movie, because Beck clearly gave voice to an underclass in his writing. Part of the unsettled quality of the film owes to Hinojosa’s unreconciled ambitions for the project, and others to a family unit still semi-estranged, which casts long shadows of doubt over certain recollections. (The movie weirdly, passingly hints at Beck’s return to the pimp lifestyle in the 1970s; there’s vehement disagreement amongst his daughters over this fact, though they all seem to agree he was a serial philanderer.)

Anchored by interviews with Holloway House CEO Bentley Morriss, other writers who labored under the label, and present-day authors like Ian Whitaker, Richard Milner and others who interviewed and wrote about Beck before his death in 1992, the portion of the film dealing with Beck’s unlikely rise to relative literary prominence is its strongest, by far. In delving down into sub-genre of realistic African-American “street” fiction and the hungry need it met (there’s even a clip of Beck’s masked appearance on Joe Pyne’s television show), it makes one wish Hinojosa had opted for deeper waters throughout. 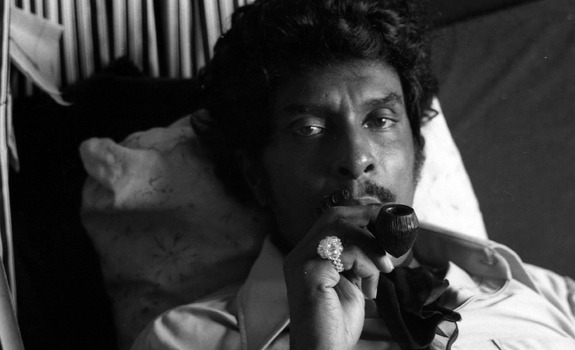