San Diego Comic Con 2013 is over and done, and so is my much-needed SDCC 2013 recuperation period, so now it’s time for your weekly Movie News Cheat Sheet, Comic Con style.

ShockYa.com had the pleasure of covering a slew of properties at the Con and while we highly recommend checking out items like our interview with Vivek Tiwary on his graphic novel “The Fifth Beatle,” our chat with David Guy Level about his comic “Back to Back to the Future,” and also some foodimal talk with “Cloudy with a Chance of Meatballs 2” directors Cody Cameron and Kris Pearn, it’s the superhero movies that have the tendency to get the Hall H audience on its feet.

Check out the films, panels, footage and events that got the crowds in San Diego particularly riled up in this week’s SDCC-themed Movie News Cheat Sheet.

1. Superman & Batman Get a Movie: While many expected a big reveal pertaining to a “Justice League” movie, Zack Snyder dropped a big bomb by announcing a Batman and Superman film instead. Of course, Henry Cavill will appear as Superman, but his co-star has yet to be cast. Snyder is in the midst of developing a story with “Man of Steel” scribe, David S. Goyer, who will then assume sole writing duties himself to pen the script. “Man of Steel” stars Cavill, Amy Adams, Laurence Fishburne and Diane Lane are all due to return with production expected to begin in 2014 for a summer of 2015 release. Click here to check out the footage of the announcement as well as a shot of the film’s logo. It’s chilling to say the least.

2. “The Avengers: Age of Ultron:” Honestly, I’m more of a fan of numbered sequels – “The Avengers 2,” “The Avengers 3,” etc. – but the Hall H crowd certainly loved when Joss Whedon revealed that the “Avengers” sequel is officially titled, “The Avengers: Age of Ultron.” In the source material, Ultron is a robot manufactured by Henry Pym (Ant-Man) who becomes self aware, turns on his creator, and becomes a supervillain. While chatting with Marvel.com, Whedon offered up additional details: “In the origin story, there was Hank Pym, so a lot of people assumed that he will be in the mix. He’s not. We’re basically taking the things from the comics for the movies that we need and can use.” On top of the absence of Ant-Man, there’s also a good chance “Age of Ultron” will not include Agent Coulson (Clark Gregg) either. Whedon told the AP, “Right now it’s not something I’m pursuing because I have so much going on in ‘Avengers 2.’ Finding out that Coulson is alive would be an entire B story. And I already have too much movie.”

3. “Guardians of the Galaxy:” As expected, “Guardians of the Galaxy” made an appearance at SDCC 2013, and most of the Guardians were in attendance. ShockYa was at the film’s press conference where Zoe Saldana (Gamora) insisted, “I feel very excited to be joining the Marvel family of superheroes, and I do believe that Guardians have bigger powers in a way. And if we were up against Captain America or Thor, we would totally kick his ass.” Comic Con also brought us a vivid piece of concept art showing off the whole gang, Dave Bautista’s Drax, Saldana’s Gamora, Chris Pratt’s Star-Lord, and the digital Groot and Rocket Raccoon. Click here to check out the image for yourself and here for our press conference coverage.

4. “X-Force” Update: CinemaBlend.com got the goods on the impending “X-Force” movie. When news surfaced that Twentieth Century Fox snatched up the domain name X-forceMovie.com, the project was practically a sure thing and then, sure enough, the studio revealed that “Kick-Ass 2” scribe, Jeff Wadlow, is set to pen the script and possibly direct. Cinema Blend had the chance to catch up with Wadlow who told them this: “I have the whole story completely worked out. I’m about 20 pages into my draft. If I wasn’t promoting ‘Kick-Ass,’ I would probably have a draft [already], but ‘Kick-Ass’ is going to slow me down just a little.” In the comics, the X-Force has taken on a variety of forms with members rotating in and out, so when asked about which iteration of the group his script will feature, Wadlow said, “Here’s the thing, I love the current run of ‘Uncanny X-Force.’ I love the classic run. Part of my take was addressing this idea that X-Force can be many different things, and that’s what got the studio excited.”

5. “World of Warcraft” Footage Revealed: Duncan Jones’ “World of Warcraft” hasn’t really been a topic of conversation in a while and even though there was some speculation the production could make an appearance at the Warner Bros. and Legendary panel, when it actually did, it made for a nice surprise. According to ScreenRant.com, moderator Chris Hardwicke took a phone call and was instructed by the caller to buy some time by rolling footage. Turns out, that footage was a “World of Warcraft” teaser. The piece involved a man getting ready for battle before panning over to another figure, a figure that’s revealed to be holding an Orc warhammer. Check out Screen Rant’s full description of the piece here and hopefully we’ll get to see the promo for ourselves soon enough.

6. The Sinister Six in “The Amazing Spider-Man?” After the villain overload in “Spider-Man 3,” it’s no wonder many are buzzing about the abundance of bad guys in Marc Webb’s “The Amazing Spider-Man 2.” But, based on some comments made during Comic Con, it seems as though there could be a very good reason for including Electro, Rhino, Norman Osborn (Green Goblin), Harry Osborn (Venom, Hobgoblin, Green Goblin), and possibly Black Cat and Adrian Tomes (Vulture) in the sequel and that reason is the Sinister Six. During a chat with Movies.com, when asked about coming back for more Spider-Man movies, Jamie Foxx said, “I’ll put it to you this way: you don’t really kill electricity; it just goes to another place.” But then he dropped the clincher: “You know, Electro was always tempted by the Sinister Six, so we’ll see.” Then, while talking to Crave Online, Marc Webb proposed, “What about The Gentleman?” When the reporter probed for more, Webb simply insisted, “I’m just saying … There’s your little tidbit. Think about The Gentleman.” Clearly Webb’s got something seemingly solid brewing because The Gentleman is from “Spider-Man: The Gathering of The Sinister Six;” he’s the wealthy benefactor behind the Sinister Six. Is that enough teasing for you? We’ve got two more “Amazing Spider-Man” movies on the way and I’d bet the Sinister Six will be the key villainous force in at least one of them, possibly planting the seeds in the third and going all out in #4.

7. “X-Men: Days of Future Past:” Twentieth Century Fox made an attempt at being super secretive about the surprise component of their San Diego Comic Con panel, but we all guessed it right from the start – “X-Men: Days of Future Past.” ShockYa.com didn’t make it into Hall H for the panel, but we did get the chance to experience a panel preview when the studio brought out much of the cast for a press conference. You can check out the entire event right here on ShockYa, but I also highly recommend reading Screen Rant’s thorough description of the teaser shown in Hall H. There’s nothing like seeing the real deal with your own eyes, but this play-by-play is exceptionally descriptive to the point that you can picture and even feel the action, tension and imminent threat.

8. “The Mortal Instruments: City of Bones:” “The Hunger Games: Catching Fire,” “Divergent,” and “Ender’s Game” definitely stole most of the YA-to-film attention, but “The Mortal Instruments: City of Bones” deserves some credit for being the nicest surprise of the bunch. Based on the film’s promotional campaign thus far and the fact that it’s first arriving at the tail end of the summer, expectations haven’t been particularly high, but after chatting with the cast and getting to catch an impressive sequence during the Hall H panel, I’m tempted to say that I’m genuinely looking forward to the August 21st release. Click here to check out our live blog of the “Mortal Instruments” panel, here for our chat with director Harald Zwart, and here for our interview with Kevin Zegers who plays Alec in the film.

9. SDCC Videos: “The Hunger Games: Catching Fire,” “Veronica Mars,” “Dancing Captain America:” I can’t say it’s worth sitting in line for Hall H overnight considering the trailer dropped online later that day, but the latest “Hunger Games: Catching Fire” promo is nothing short of incredible. It’s a comprehensive two minute and 25 second piece that is loaded with plot points, but uses every single one to make you desperate for more. The performances are on point, the visuals are stunning, and there’s an overwhelming degree of intensity that hits extraordinary levels when it comes time to return to the arena. Six years after “Veronica Mars” wrapped its TV run, the movie version made its way into Hall H for its very own Comic Con panel. Creator Rob Thomas and stars Kristen Bell, Francis Capra, Enrico Colantoni, Percy Daggs III, Jason Dohring, Ryan Hansen, Chris Lowell, and Tina Majorino delighted audience members in San Diego with a Q&A session and also unveiled this sneak peek, which includes footage from the film. Last up is a little gem put together by the fine folks over at Screen Rant. Odds are, you’ve seen photos of this man in Comic Con galleries, but now it’s time to see him in action. Click here to meet Hamilton, the dancing Captain America.

10. SDCC Posters & Images: San Diego Comic Con is all about the Hall H footage, but the event also marks the opportunity to build hype further through the debut of brand new posters and images. Twentieth Century Fox offered up film still #1 for “Dawn of the Planet of the Apes” featuring Caesar at the helm of his followers as well as well as a pair of particularly innovative character posters for “X-Men: Days of Future Past.” In addition to that new trailer, “Catching Fire” also offered up a brand new still from the film of Finnick Odair (Sam Claflin) offering Katniss a sugar cube. Over on the “I, Frankenstein” front, Lionsgate unveiled three new poster designs pitting Aaron Eckhart’s immortality against good and evil. “300: Rise of an Empire” also bestowed a pair of posters upon the web while “Thor: The Dark World” went the concept art route, showing off this electric new rendering. 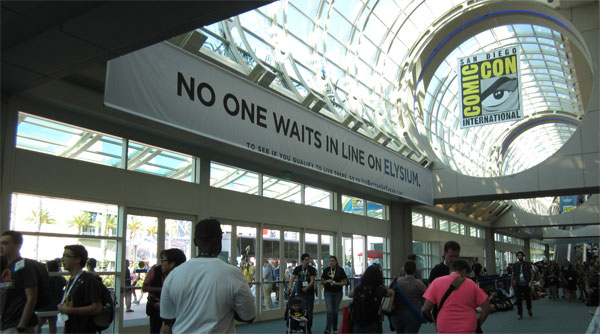