Power seeks to protect its interests, inherently — to validate its judgments and its actions, or even inaction. That’s perhaps the most salient, unnerving lesson of “The Cheshire Murders,” a confounding documentary that can’t quite figure out what stories it wants to tell. And the fact that said point lurks just outside of frame says everything one ultimately needs to know about this dark true crime offering, which drops the ball in illuminating with any discernment the tale of a horrible, recent triple-homicide.

Directed by Kate Davis and David Heilbroner, the movie centers around a July, 2007 home invasion in the small Connecticut town of its title, in which Dr. William Petit was badly beaten and his wife, Jennifer Hawke-Petit, and two daughters, ages 17 and 11, raped and murdered. After setting upon the house late in the night, and beating patriarch Petit unconscious with a baseball bat, Joshua Komisarjevsky and Steven Hayes terrorized the rest of the family for several hours before taking Hawke-Petit to the bank in the morning, to make a large withdrawal. She slipped word to a bank teller of her predicament, but returned home with one of her captors.

While police set up a distant perimeter around the house, the perpetrators had 35 minutes to concoct a new escape plan — a plan that involved burning the home to the ground, with its bound inhabitants inside. Petit would escape but his wife and daughters would not. Upon fleeing, Komisarjevsky and Hayes were captured a couple blocks away. While each blamed the other for the escalation of the violence, both defendants offered to plead guilty and accept life in prison without the possibility of parole. The prosecution, however, opted to aim for the death penalty — an assessment with which Hayes’ own brothers even agreed.

The crimes at the center of “The Cheshire Murders” are horrific and despicable, a fact which no one — including defense attorneys and the perpetrators themselves — deny. The movie casts an extraordinarily broad net, though, in trying to show both the daisy chain of impact of the shocking crime, and some of the explanatory or shading biographical details that led to (or at least partially inform) Komisarjevsky and Hayes’ brutality (both were themselves victims of sexual abuse as children). Some of these interviews (two of Komisarjevsky’s ex-girlfriends, for instance) are sad and fascinating, but they also tug the narrative in all sorts of different directions — directions which Davis and Heilbroner are ill-equipped to handle.

Is “The Cheshire Murders” about the failure of a broken mental health system? The dark, warping legacy of child abuse, particularly sexual abuse? The equally distorting, damaging effects of Christian fundamentalism? The heartbreaking story of police incompetence and after-the-fact cover-up? The death penalty writ large, and/or as it intersects with fiscal responsibility? Or just a family’s grief, and the ripples it sends throughout a close-knit community? There is certainly no shortage of subplots, or post-arrest mini-twists to the case (Hayes attempted suicide with nine stashed doses of thorazine and klonopin, and the Connecticut state legislature moved to abolish capital punishment prior to the trial), but “The Cheshire Murders” is a movie with about a dozen different topic sentences, and messy, unfocused editing undoes any satisfying blending together of these disparate elements. The filmmakers opt for a more-is-more tack, and the haphazard, Jackson Pollack approach makes the movie’s 117-minute running time feel almost interminable.

To those conditioned, too, to soak up the grief-mop emotional offerings of the murder-of-the-month narratives that news magazines like “Dateline NBC” and various cable networks peddle, “The Cheshire Murders” may feel especially unrewarding, given that the family members of the victims (almost all on Jennifer Hawke-Petit’s side) aren’t teary and histrionic by nature. They’re incredibly articulate and moving in their own way, but steel-spined in their New England will.

NOTE: “The Cheshire Murders” debuts today on HBO, and plays throughout the month on the channel. Check your local listings for showtimes. 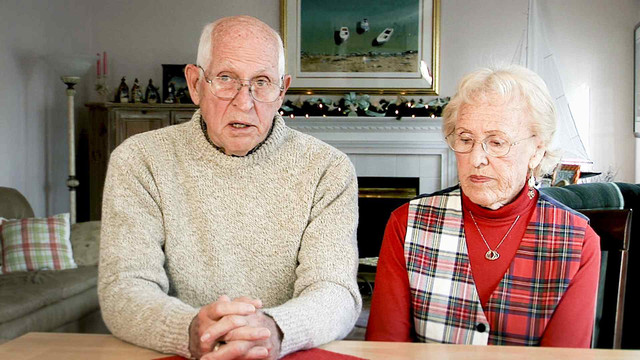