The precision and grit of “District 9” are in there, but Neill Blomkamp’s choice to indulge in his bigger budget by throwing in every advanced technology he could conjure up dilutes the more thoughtful, raw components of “Elysium.”

In the year 2154, the rich live in space on Elysium while the poor reside in the overpopulated slums left on Earth. While President Patel (Faran Tahir) Secretary of Defense Delacourt (Jodie Foster), and the rest of the elite enjoy beautiful weather, enormous houses, and machines that can correct any illness in an instant, folks like Max DeCosta (Matt Damon) risk their lives to survive down below.

When a lethal dose of radiation leaves Max with just five days to live, he knows that it’s now or never. He must get up to Elysium. In an effort to earn himself a seat on a rogue ride to the space station, Max accepts a mission from Spider, an underground leader of sorts, to steal pivotal information from Armadyne CEO John Carlyle’s (William Fichtner) head and download it into his own. Little does Max know that that data will put him right in Delacourt’s line of fire and, therefore, make him Kruger’s (Sharlto Copley) primary target.

The core concept of the privileged on Elysium versus the lowly on Earth functions both as an ideal hook and backbone to Max’s story, but even the strong appeal of that scenario can’t sustain the overabundance of futuristic weaponry and technology. There’s a robotic police force, the contraption that essentially makes Max fight like a superhero, the disease-killing machine, air bursting ammunition, Elysium itself and loads more. There’s just so much we can be expected to digest and believe in 109 minutes.

Blomkamp even seems to have a tough time accounting for all the details himself. “Elysium” is absolutely ridden with plot holes. What is the purpose of Max suffering from the radiation? If it’s to up the suspense via a ticking clock, that effort failed considering the five-day rule doesn’t feel tangible enough to make in impact. But then there’s Max’s fear of death. It’s an intriguing scenario – the hero who’ll sacrifice anything and anyone to save his own life – but even then, there’s still no need for radiation because another piece of technology will force Max to face just that later down the line.

Then there’s the expendability of Alice Braga’s Frey and her daughter. Max and Frey were orphans raised in the same convent. Frey’s choice to become a nurse and Max’s preference for stealing cars to earn a living created a rift in their relationship, but after being reunited during a trip to the emergency room, all of Max’s feelings for Frey come rushing back. It’s sweet and all, but is it necessary? No, and neither is Frey’s sick daughter suffering from leukemia. Both characters are totally contrived and do absolutely nothing to advance the story in logical ways.

Foster suffers from a similar issue. Delacourt is a total dead end. The idea of her wanting to preserve the way of life on Elysium is one thing, but the more extreme plan she attempts is just outrageous, self-destructive, and unnecessary. This is also just a strange performance from Foster. She makes Delacourt robotic and then gives her this odd accent, perhaps a warped Southern drawl. Why? Who knows, but it’s awfully distracting.

Kruger, on the other hand, is easily the film’s most successful character. He’s outrageous in every respect, but it works. Not only does Copley serve as “Elysium’s” primary source of comedic relief, but he also manages to make Kruger feel like the ultimate threat, too. And that’s what winds up making Max’s portion of the film a thrill. It’s Max versus Kruger with Spider and his gang watching Max’s back, and the dynamic between all the parties in play works well. Diego Luna is a standout in that portion of the film as Max’s closest buddy, Julio. The relationship between the guys is easily the most convincing emotional connection in the film and it makes a particular battle with Kruger exceptionally suspenseful.

It seems as though Blomkamp may have gotten a bit carried away with the bigger budget, but his gritty and intimate shooting style is still there to ground even the loftiest scenarios and sets. He’s undoubtedly a talented filmmaker with incomparable ideas, but in the case of “Elysium,” he’d have been better off if he’d picked and chosen from those ideas rather than trying to cram them all into one movie. 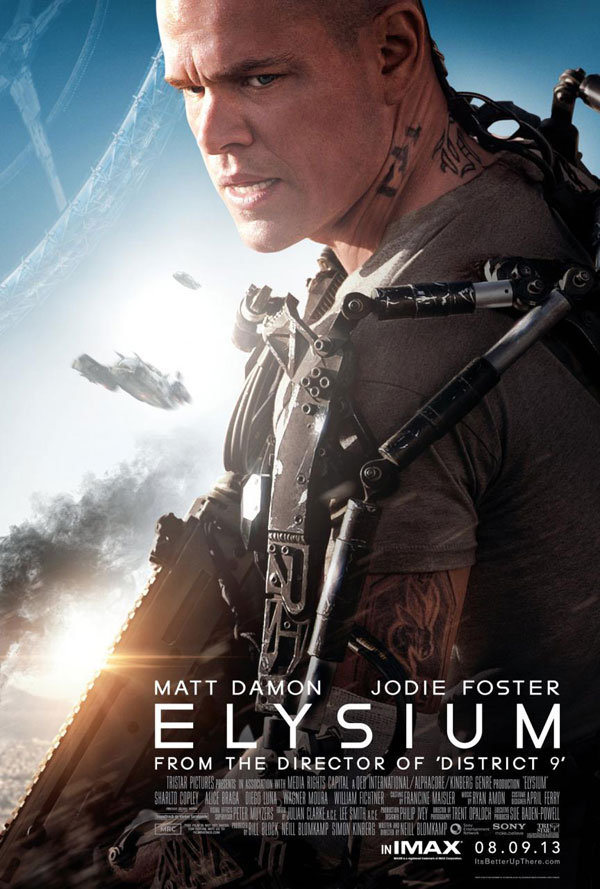