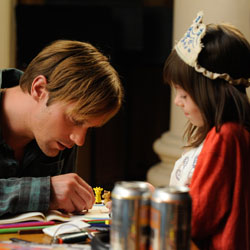 Alexander Skarsgård may tower over his tiny “What Maisie Knew” co-star, Onata Aprile, but that didn’t keep the pair from striking an instant connection, something that resulted in an incredible on screen chemistry and also left both with a particularly strong friendship when filming was done.

Aprile leads as six-year-old Maisie. Even while her parents (Steve Coogan and Julianne Moore) still live under the same roof, Maisie spends most of her time with her nanny, Margo (Joanna Vanderham), but now that they’re separated and struggling through a heated custody battle, Maisie’s lifestyle is completely erratic, going from parent to parent and often to Margo or whoever will watch her when their jobs become the priority. Skarsgård steps in as Lincoln, Moore’s character’s new husband, or rather just someone to watch Maisie while she’s working as a musician on tour.

After experiencing their bond firsthand ahead of “What Maisie Knew’s” May 3rd release, it’s a wonder the duo managed to nail the portions of the film during which Lincoln is first winning Maisie’s trust. Skarsgård may not have been able to lift her up or let her swing from his arm on the spot, but you can get a taste of their distinct and charming connection while we talk about their height difference, Aprile’s new turtle, their collaboration, and more in the video interview below.