If you’re a subscriber to FilmOn, the internet’s largest provider of free live television which licenses content from hundreds of broadcasters worldwide, you are probably in awe of the sheer amount of content you can choose from. Well, now you can partake in some of the content FilmOn has in a completely different way.

FilmOn has announced a new system that automatically builds branded live TV sites and mobile apps so internet publishers can have free access to FilmOn’s giant library of content. This library includes NBC, CBS, FOX, and ABC in 12 major cities.

In less than five minutes, affiliates can have their own TV web and mobile sites up and running, branded with their own corporate logo and pre-loaded with commercials and subscription packages. FilmOn has partnered with some of the best advertising networks and advertising agencies out there, including Videology, Brightroll, Yume, Google, Evolve Media and more.

Also, developers can use the application programming interface to develop their own applications. FilmOn’s social television such as Cavecast and BattleCam social webcam apps and services are integrated into the affilate network to increase viral networking and sharing power.

Frostwire, one of the most popular file sharing applications on the internet and in the mobile world, has said that they have always worked to level the playing field for content creators willing to provide free content to an audience that craves free downloads. The partnership with FilmOn has given the company the opportunity to offer free live TV content to their worldwide community in a way that was previously unavailable.

“Within just a few weeks of testing the FilmOn platform on our mobile users, we can see the value of live TV online. This is a really attractive offering which keeps our users coming back for more everyday. With an ever growing offering of channels and the affiliate platform, we think FilmOn has everything to become the equivalent of a worldwide cable TV network for the internet across all devices, something that could bring major disruption in the TV industry,” said Frostwire’s Angel Leon.

Jim West, chairman of the NRB (National Religious Broadcasters Association) and co-chair of the Advanced Television Broadcast Alliance, has also said glowing things about the new affiliate program. “Currently, The WalkTV and their affiliates are pleased to partner with FilmOn who have taken ‘over-the-top’ TV to a whole new level,” said West. “I can log on to my dashboard at our branded FilmOn TV sites. From the dashboard we can see the revenue generated from online ads and subscriptions but not from just our channels but six hundred others. I can then take the analytics and upsell our original broadcast property. We could not have better partners than FilmOn.”

You can learn more about this new service at FilmOn’s affiliate page. 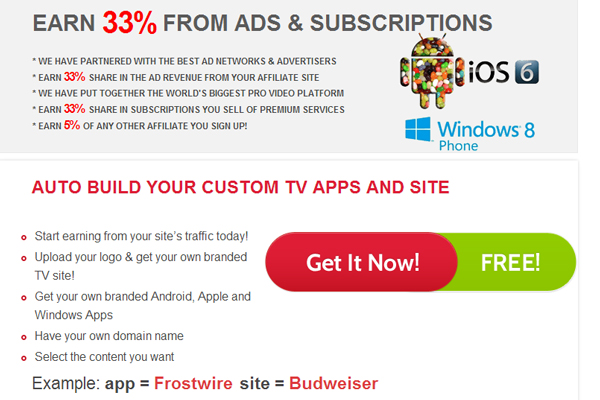