Filmmaker David Gordon Green has alternated between independent and studio fare with remarkable facility, but equally impressive to that fact has been the difference in styles and genres he has explored. Coming on the heels of 2011’s “Your Highness” and “The Sitter,” his latest film marks a return to more ruminative waters. A loose adaptation of a recent Icelandic movie, the 1988-set “Prince Avalanche,” stars Paul Rudd and Emile Hirsch as a pair of bickering men painting highway road stripes through a desolate Texas countryside that’s been recently ravaged by fire. For ShockYa, Brent Simon recently attended a press day where he had a chance to sit down with Green, and talk about the film and his next projects. The conversation is excerpted below:

Question: The work these characters do is pretty interesting and unusual subject matter — did you know much about it prior to the film?

David Gordon Green: My dad is friends with a guy who makes the paint. I think it’s pretty interesting. He was actually kind of a technical adviser on the movie, because we had to come up with a paint that we could wash off the roads. It was harder than you think, especially when you have those little fragments with reflective qualities in it and what not.

Question: In the Icelandic movie were they painting the roads?

DGG: They were, but they were actually more manly because they measured [their lines] out and did it by hand. These guys were maybe a couple years in the future and they just had a machine that would do it. But the Icelandic film was a great inspiration not only in terms of it being a great character piece, but (because) I liked the meditative quality of the profession. I’ve had (unusual) jobs — like, I worked at a doorknob factory and a medical supply factory. And all these jobs where doing something so routine and exact throughout the day, especially when you’re accompanied by these little sounds that go with it, really gives your head this beautiful place to meditate, and it opens your mind rather than closes it off.

Question: How did the two lead characters change in your process of adaptation?

DGG: I just wanted to create an experience for the audience where there would be enough of an odd-couple, back-and-forth dynamic — where you could get the real contrast of these characters and yet how they complement each other in a strange way — to evolve through the narrative. I also greatly identify with both of these characters, and see them as different sides of myself. And I think the audience can find elements of themselves, or people that they know, [in them], and invest themselves in the characters in the way that I did. It was a fun way to develop a film, because typically you see a film and either you identify with the characters and scenarios or you don’t, but in this [instance] I got to watch the Icelandic film and relate to and see myself in these characters and then think, “Now what if I really did embrace them, and what if they said what I would have said instead of what they did here?” It was a cool way to get an ownership of it.

Question: He has way less screen time, but Lance LeGault certainly makes an impression in the movie. How did you come to cast him?

DGG: Lance LeGault was a great character actor, and he passed away shortly after we finished the film. He was an amazing singer — he used to play with Elvis. I’d met him doing a Dodge commercial out in Tehachapi, California, out in the desert, and we were racing all these cars through this small town. He was a background actor in it, and I just heard this booming voice and see this guy out of the corner of my guy. He had come down from Bakersfield to just hang out and be a background extra, and I started talking to him. This was right when I was conceiving of putting this movie together and thought it would be a great role for a guy like that to stretch out and dust himself off and have some fun with. It was a real privilege to be able to work with a guy that had a mind that worked as his did, and could contrast these characters even further and put a legitimate fear in Emile’s eyes in some of these scenes.

Question: You shot in Bastrop, Texas, which had recently had a fire. How big of a part did that environment play in the look and feel of the movie?

DGG: There’s always this melancholy umbrella over (the movie) — even in the scenes where it gets more humorous there’s a haunted quality there. We tried to use music to create a harmony with the landscape, and then the characters or performers are in the foreground with their narrative. Also integrating characters like Joyce Payne, the woman that Paul Rudd’s character encounters going through the ashes of her home looking for her pilot’s license. That was just a real Bastrop fire victim when we were in production on the movie; we were actually looking for the house where Paul does a pantomime scene and stumbled upon Joyce and said, “Well, why don’t we integrate her into the movie and tell her story?” So it was really beautiful to find this strange, mystical story that she was telling. Having those kind of opportunities to bring a real sensitivity to the reality of what a devastation a wildfire can do was important. We had a screening for the Bastrop Fire Department recently, a benefit screening, and it was amazing seeing a woman who was a firefighter in that fire (you mentioned) coming out and responding very emotionally to the movie, and then on the other side you have a kid who thinks it’s a really funny movie and considers it a comedy. I really like the juxtaposition of an audience’s reaction, because depending on the day or moment or scene, I feel the same way.

Question: What about the specificity of some of the props in the film?

DGG: Well, the film takes place in the 1980s as a way to keep our characters isolated, so there’s no cell phones and emails back home or Skype or what not — all these things that keep us so connected. I love the romance of a hand-written letter, so I started with that, insisted upon that, and then created a world around that. But as far as the art direction and costume design, Richard Wright and Jill Newell are very frequent collaborators of mine, and department heads, and we just kind of got into what we were interested in. We wanted it to feel like it takes place not necessarily in a specific year or in a specific place. …It was nice to have a canvas that we could take a lot of liberties with and really find our own personal tastes and sculpt them accordingly — find these strange little items in flea markets and things like that.

Question: And did you draw on any personal experiences for the “Equal Time Boombox Agreement” arguments in the movie?

DGG: (laughs) Guilt. The “Equal Time Boombox Agreement” was from my childhood. I have three sisters and we were all very competitive, and I didn’t like to listen to Abba and the “Grease” soundtrack as much as they did. And they didn’t like Metallica as much as I did.

Question: What’s next for you?

DGG: I just finished a movie called “Joe” that’s going to be at the Venice Film Festival next month, which will be fun. And I just finished shooting the fourth season of HBO’s “Eastbound and Down” last week. And I’m starting a new movie in the fall. Oh, and I’m doing a Planters Peanut commercial with stop-motion! It’s been really fun learning and working with this company Laika, out of Portland, Oregon. We’ve been working on a new Mr. Peanut, which is pretty fun. 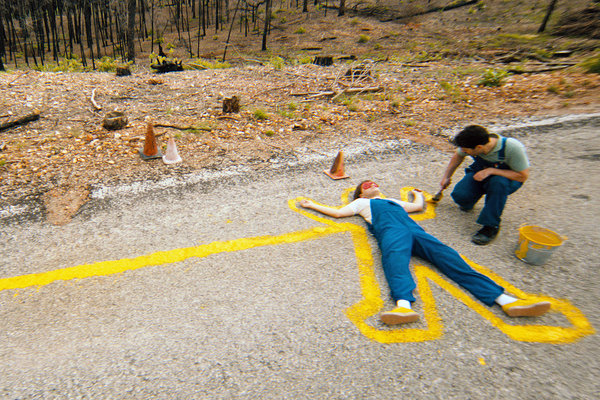