A nicely captured if fairly straightforward coming-of-age film about transcending adolescent summer camp bullying, the family-friendly “Standing Up” represents a rather curious filmography entry for director DJ Caruso, whose other movies (among them “Disturbia,” “Eagle Eye” and “I Am Number Four”) have almost all all showed a penchant for slick, pop-minded entertainment. Vacuumed free of darkened peril or any of the idiosyncratic pop of Wes Anderson’s “Moonrise Kingdom,” which charts a somewhat broadly similar story of two pre-teens on the lam, this slight but well intentioned effort seems a better fit for small screen viewing.

Adapted for the screen by Caruso from Brock Cole’s young adult novel “The Goats,” “Standing Up” tells the story of 11-year-old Howie (Chandler Canterbury) and 12-year-old Grace (Annalise Basso), a pair of bespectacled North Carolina summer campers, heretofore strangers, who each find themselves the butt of a humiliating prank by their peers — stripped of their clothes and left overnight on an island. Instead of just waiting until morning and suffering the intended degradation, however, the pair set out on a wild, by-hook-and-crook journey. Along the way Howie and Grace come across more sympathetic kids from a different camp and repeatedly get a chance to flex their wit and ingenuity, as they slowly wind their way back to camp — figuring they’ll just time their arrival to a family day visit from Grace’s working mother, Meg (Radha Mitchell).

More than a decade ago, television director Caruso made his film debut with “The Salton Sea,” a strikingly stylish noir thriller starring Val Kilmer and Vincent D’Onofrio. “Standing Up” feels like a return to those roots in a lot of ways. It’s rather beautifully shot, by cinematographer Alex Nepomniaschy, but otherwise feels small in almost every way. There are plenty of nominal kids’ films (“Stand By Me,” for instance) that play on a straightforward dramatic level, but also connect more deeply because of the clarity and perceptiveness with which they connect to adolescent feelings and fear. “Standing Up” flirts with these emotions, but kind of mimics rather than channels them.

The lead performances are good, in a fairly unshowy fashion; it certainly helps in one’s surrender to the material that Canterbury and Basso are neither overly familiar faces nor very mannered in their deliveries. As Grace’s mother, meanwhile, Mitchell is called up to do little except fret and express pro forma outrage at the kids-will-be-kids idiocy of the lead camp counselor; Kilmer, though, is put to wonderfully effective use in a minor role. For aficionados of the novel or younger kids who could use a booster shot of self-esteem on the bullying front, “Standing Up” is a worthwhile entry.

NOTE: In addition to its theatrical engagements, including in Los Angeles at the Laemmle Playhouse 7, “Standing Up” comes to DVD soon. 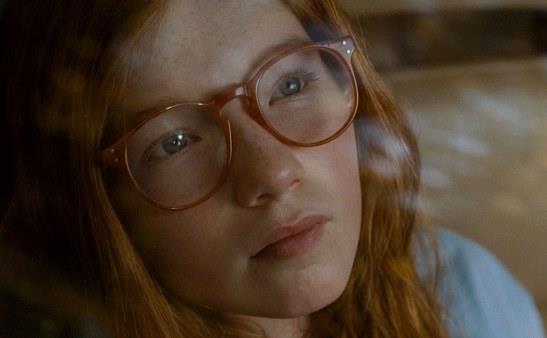