One could be forgiven for wondering if Rob Corddry has cracked the code to human cloning. After all, in addition to continuing work on the award-winning “Children’s Hospital,” Corddry has appeared in six films this year. The latest is Thomas Lennon and Robert Ben Garant’s horror comedy “Hell Baby,” in which Corddry stars (among others) with Leslie Bibb, playing half of a married-and-pregnant couple who move into a haunted fixer-upper in New Orleans. On the eve of the film’s Los Angeles premiere, Brent Simon had a chance to sit down and talk to Corddry for ShockYa, about Po Boys, improvisation, the future of comedy and, quite literally, the blood he shed for “Hell Baby.” The conversation is excerpted below:

ShockYa: It’s premiere day! What’s the protocol — will you be staying to watch the movie again tonight?

Rob Corddry: Yes, I’ll be staying to watch the whole thing. This will only be the second time I’ve seen this cut. It’s changed a lot. I watched it a long time ago when it was different, and then the second time I watched it was right when it came out on VOD, so I think I got drunker the more it went on. I don’t quite remember some of the bits at the end, so that will be fresh for me.

ShockYa: It’s been a really busy year for you — with “Warm Bodies,” “Escape From Planet Earth,” “Pain & Gain,” “Rapture-Palooza,” “The Way, Way Back” and now this — and I feel like your honorary, doting Jewish grandmother, because I’ve now seen all of them.

ShockYa: It must feel really great to go to movies with him, then.

RC: I don’t go to movies with him, are you kidding me?! Oh my God. And I don’t let him go to certain movies — like “Hot Tub (Time Machine)” I don’t think he’s even heard of. I don’t think he’d like that one.

ShockYa: Having worked with them each now, discuss the similarities and differences between Ben (Garant) and Thomas (Lennon) and Michael Bay.

RC: (laughs, coughs) The similarities will be more fun. They’re all very handsome people, OK? (pause) That’s where it ends. (laughs) No, I’d say they’re all very good at what they do. They all have… ummm, oh gosh, I don’t even know if they have a letter their names that they share. I’ve run a couple through, and it’s not working. The ways in which they are different are plenty.

ShockYa: “Hell Baby” was shot in 20 days. Did you spend one full day shooting the movies’ Po Boy sequence?

RC: (laughs) No, there was one full day, or maybe three-quarters of a day, at that place, Domilise’s, which is a real place. I was just down there (in New Orleans) again, shooting “Hot Tub (Time Machine) 2,” and went back there, because that place taught me about Po Boys. I thought Po Boys were just a sandwich until I went there. But I blew that scene, because I was being the “actor,” (and making) sure to spit at the end of the take, when it’s all done. “You don’t want to eat too much, you don’t want to feel sick.” (Rob) Huebel, though, ate six Po Boys that day, and he felt like shit, but in retrospect who cares, because he doesn’t feel like shit today but he has a great memory of destroying delicious Po Boys!

ShockYa: Ben and Thomas talked about the importance of casting guys who have not only improvisational experience, but have also been in the editing room… so you’re able to fine-tune that skill even further on set, in order to give a director different editorial pivot points later on.

RC: Oh yeah. It’s from producing. From having “Children’s Hospital” I have now both the gift and the curse of being able to think like an editor. And you’re definitely trying to help out and make the day as tight as possible. You don’t have a lot of money on something like this, so we would both suggest at times if you want to just shoot this as a two(-shot set-up), we  can play it out in this scene, so you don’t have to go back for single close-ups on an exchange.” I don’t know if that happened specifically on this, I can’t remember, but just as an example… you’re always trying to minimize time. At the beginning of the day you usually go and block out the scene and it always starts out with a rehearsal where the actors can do what they want. I’ve always hated that, because a lot of actors don’t understand that what you’re doing can make or break the day there, and if you really think your character is going to sit on the couch for this specific line, you could be completely fucking everybody because that’s a huge camera move. So just stand up, man! Just stay standing, unless that’s totally easy and part of the plan or feasible at least. So many people will argue about what their character would do — I’m like, “Do what the people who are paying you –” (sneezes)

ShockYa: Even in comedy, do you find that to be true (that people will argue)?

RC: Hell yeah, especially in comedies, because sometimes it lives or dies by how it’s framed, and on low-budget even more so. So Huebel also has an incredible eye for that, probably from doing “Human Giant” and being a producer on that. And he does that on “Children’s (Hospital),” too. And he’s also great about just being like, “Come on, can we just go? Really, you need me to improvise another take of this? You’re not going to use it, let’s just go.” And we’re like, “You’re right, let’s go!”

ShockYa: “Children’s Hospital” has a rabid fan base and is quite a success, but there’s been a crazy arc to its current incarnation, and part of that coincides with the new ways people are watching content now. I imagine that’s both exhilarating for someone who has a vested interest in creating a lot of their own content, and then also scary as hell and frustrating because of the fits and starts.

RC: It is both of those things, yes, and frustrating especially for that reason, but when the Emmy nominations came out all these comments on Internet sites were people saying, “Ugh, why did Netflix get so many nominations — that’s not TV!” And I’m like, “Where do you watch it? For the most part you’re watching it on your TV. It’s a TV show.” That’s what bums me out… it’s changed, but people’s thinking is always the last thing to change. And we’re right there. I missed everything — I missed the birth of punk rock, the golden age of comic books. And it’s like, “Oh, great, I got on at the ground floor of the new golden age of television!” I gotta wait for all these people to catch up and realize that it doesn’t matter, and that now there are so many different buyers and all you have to do is write something cool that you like and then decide what place it fits.

ShockYa: Do you find that influences your process, though? Do you have ideas attach themselves to form or medium immediately?

RC: Yeah, yeah, yeah — with “Children’s Hospital,” I was definitely like, “Web series — that’s not a TV show.” But things are changing so fast that it could very well be a TV show, and it is. But just recently… well, I did a pilot last year, and it didn’t go, and right around the upfronts all the articles written weren’t about how this or that show wasn’t going to make it — it’s usually a big horse-betting thing — but it was all about the whole concept of ad-buying for networks, and writing shows and basing content on a certain whatever, on certain financial reasons rather than purely creative ones is dying. So I’d been planning with some friends to pitch a network show and after that I was like, “Why, what am I doing?” After that I was like, “OK, if I’m going to do a network show then I have to commit to a few things. One, it’s a money-grab — I’m going to make money.” My family of comedians don’t make a ton of money, right — that’s another bad part of being part of a correction. And so it would be a money-grab — I’m gonna get paaaid. And then I’m going to do something that has the most chance of getting on: I’m going to do the Will Smith method of making a TV show, and I’m going to find out what things work and then make that show. But I’m also going to make it not so that it’s something that I’m that passionate about but it’s something that I would really like and have fun doing for seven years. And that’s my only criterion. (laughs) Then again, I can just write the show I want to write and (go to) Netflix or whatever.

ShockYa: Wrapping up, I would be remiss if I didn’t ask about what is possibly the gnarliest on-screen baby since “Eraserhead.”

RC: There were maybe six babies, I think — one that didn’t move, that’s the one we tossed around. We would grab it and move it ourselves a bit, almost like puppeteers in certain places. And then was one that was totally mechanical, which was really cool. And then there were ones that could do certain other things. …The thing for me that was the biggest bummer in that scene was the blood. When I get the blood splashed in my face, that was shot out of what is actually called a blood cannon, and it’s hydraulic and set to a certain pressure. And these guys are — maybe it was a prank, but I thought my eye had been liquefied. I had cuts on top of my head — from liquid! (laughs) And then I noticed the blood wasn’t coming off, and that was because my nose was bleeding from the force.

ShockYa: You literally bled for this film.

RC: It was horrible, I’ll never do that again. 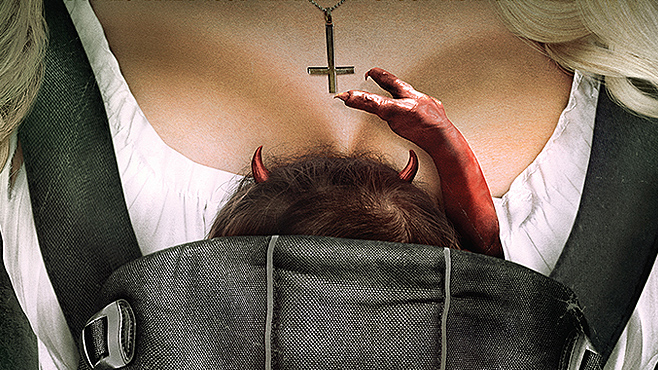