With so much straightforward supernatural and/or dystopian teen violence, Jason Lapeyre & Robert Wilson’s “I Declare War” is a welcomed and highly effective experiment in juggling preadolescent imagination and some very real, adult life lessons.

PK (Gage Munroe) is the master of war – capture the flag, fake gun, water balloon grenade, kid-style war. At the start of “I Declare War,” PK is in the midst of his most heated battle yet. He’s got no trouble outsmarting generals with no knowledge of proper combat tactics, but Quinn (Aidan Gouveia) is different and PK knows Quinn has the smarts to ruin his perfect record. It’s all harmless running around in the woods until an all-consuming desperation to win creeps in and blurs the line between the rules of the game and the darkness and guile of real war.

Adults have paintball, but who doesn’t dream of going at it with a full-blown imagination again? The natural appeal of the concept makes “I Declare War” a winner right from the start. The visual transition from self-made stick guns to seeing the players brandishing real weapons is absolutely exhilarating. You’re seeing their imaginations become a reality right before your eyes, and it’s an infectious thrill.

However, before that idea becomes a tired shtick, Lapeyre and Wilson start layering on very real emotions and relationships, and those emotions and relationships are exceptionally well woven into the fake war. The stakes are so high this time around that the game could have serious real life repercussions and while you feel the gravity of the situation in that respect, Lapeyre and Wilson also never lose sight of the fact that it is still a game and the blend between the two mentalities is vital to making “I Declare War” both a fun and poignant experience.

PK and his buddy Kwon (Siam Yu) are the standouts. They’ve got that best friend vibe that’s easy to connect to, but then their war personas add unheard of best friend expectations. You know what it means to be a good friend, but, at the same time, war is war and sacrifices must be made. But, then again, Lapeyre and Wilson cultivate this vicious cycle between real life and the game so that ultimately, you find yourself weighing the value of each just as much as the characters in the film.

The relationship between Quinn and Mackenzie Munro’s Jess, the sole female fighter, is a little too familiar to make much of an impact, but Munro excels when taking matters into her own hands. Then there’s Sikorski and Frost (Dyson Fyke and Alex Cardillo) who, at first, appear to be the film’s antagonist’s lackeys and nothing more, but as the narrative progresses, they get their own subplot of sorts. Considering the amount of characters in play in the full feature, it’s quite impressive that Sikorski and Frost’s side story comes with a well-constructed beginning, middle, and end.

In fact, almost every single character in “I Declare War” emerges from the battle having experienced a degree of change. Spencer Howes’ Joker learns a thing or two about making friends, Kolton Stewart’s Caleb is essentially a mute fly on the wall, but undoubtedly walks away feeling the repercussions of the climax of the film, and Andy Reid’s Wesley figures out how far he’ll go to uphold his values. And even characters without arcs still manage to make an impact. Eric Hanson’s Kenney doesn’t even make it past the first act, but thanks to sharp dialogue and a prime performance to match, he’s tough to forget.

But that leaves the most memorable of the bunch, Michael Friend’s Skinner. He’s a loose cannon on Quinn’s team with a habit of taking the imaginary violence a bit too far. He’s the ideal balance to Munroe’s PK. When PK dashes through the woods with a pistol in hand, you buy it but also retain the slightest memory that the weapon is merely sticks and tape. When Skinner is locked and loaded however, the threat feels as real as ever, partially because Skinner does engage in some very real torture tactics, but also because Friend is capable of producing an unparalleled evil eye.

There is some legitimate kid-on-kid violence in play here and it can be off-putting, but for the most part, Lapeyre and Wilson nail the balance between imagination and reality remarkably well. It’s the ideal package of fun and games mixed with a stirring dose of dark authenticity, and that makes “I Declare War” suspenseful, moving, and highly entertaining. 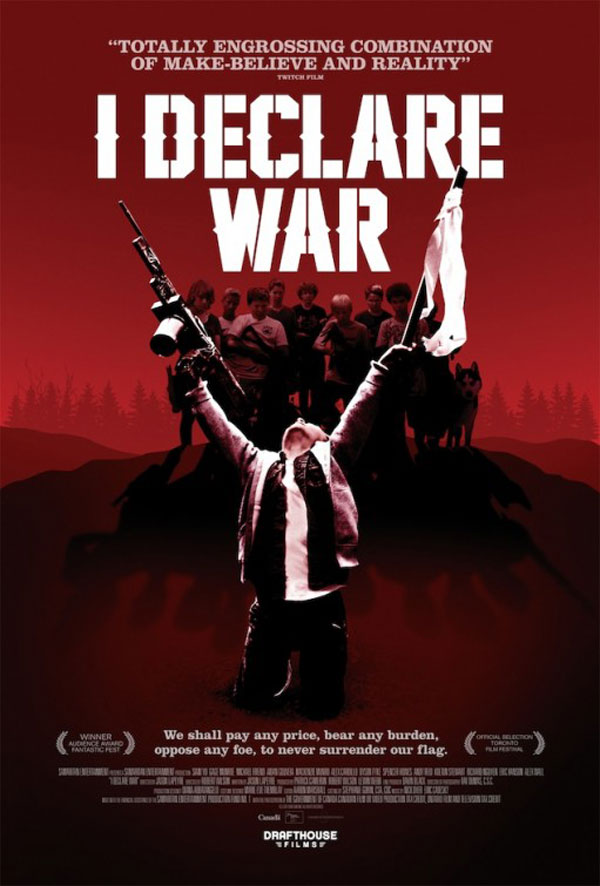