The seriocomic feature film debut of television director Liz W. Garcia, “The Lifeguard” offers up a contrived series of precious posed moments in telling the story of a young career woman who moves back home in an effort to shake off a low-lying cloud of personal and professional ambivalence. In her starring role, Kristen Bell delivers a charming, engaging performance, but the much sharper take on this same sort of thirtysomething ennui (even though Bell’s character is quick to point out that she’s still 29 years old) is found in last year’s “Hello, I Must Be Going,” starring Melanie Lynskey.

Leigh London (Bell) is an AP reporter in New York City who, after her romance with her engaged boss sputters out, moves back home to Connecticut with her parents. Her dad Hans (Adam Lefevre) is sympathetic, but Leigh’s tightly wound mother Justine (Amy Madigan) is going through issues of her own, and is chafed a bit by her daughter’s sudden presence, cat and all. Leigh re-connects with her old friends — Todd (Martin Starr) and Mel (a wonderful Mamie Gummer), the latter now an associate principal at the high school where they matriculated — and in short order decides to reclaim her old high school job, as the lifeguard at a condominium complex.

It’s there that Leigh meets a group of outsider/skater types, including Matt (Alex Shaffer, from “Win Win”) and Little Jason (David Lambert). They’re high school students, but on the precipice of dropping out, in order to… move to Vermont? Yep, that’s their plan. Beer is bought, marijuana is smoked, and inappropriate relationships ensue, along with a requisite side of soul-searching.

Garcia has a nice touch for pithy dialogue (“Is this parking lot passed down in the DNA of skaters, like a geese migratory pattern?” Leigh wonders aloud), and also makes quite nice use of music; her film feels surprisingly well stitched together from a technical standpoint. But the backstories for her characters are threadbare, and so their motivations are often bewildering. Certain scenes just start in strange places (Little Jason randomly enters Leigh’s car in a rainstorm), and a couple of the supporting characters can’t overcome the limitations of the screenplay. (Particularly under-sketched is Mel’s sad-sack husband, played to annoying effect by Joshua Harto: he exists only to play “the rooted adult,” hectoring Mel and generally moralizing.)

Bell, looking beautiful with hardly a trace of make-up, exudes a warm watchability. And she has a fantastic rapport with both Starr and Gummer; their scenes are a treat. The torrid affair between Leigh and Little Jason, though, while evocatively captured, never digs much past the surface of Leigh’s distractible libidinal impulses. What ultimately tips “The Lifeguard” over from marginal recommendation to marginal pan is a cheap plot device at around the 75-minute mark that attempts to suddenly wring high-stakes drama from the narrative, followed by a cloying finale. With apologies to Thomas Wolfe, you can go home again; “The Lifeguard” just proves that sometimes it’s not the best course of action. 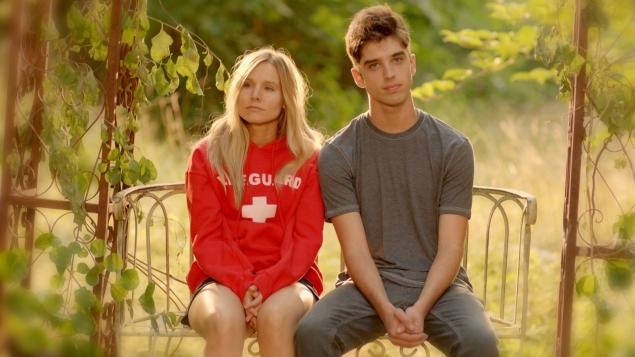