The 9th and final season of The Office has been released on Blu-ray and DVD with several extras including deleted scenes, audition tapes with some now big name celebrities; behind the scenes featurettes, a look into the props department, a panel interview with the producers and writers and  a blooper reel.

The coworkers at the Dunder Mifflin Scranton branch keep on pushing paper as the PBS documentary crew wraps up their filming. Andy has a midlife crisis after his boating trip with his brother, then quits to pursue a singing/acting career with his meltdown caught on camera which becomes a viral video, Pam & Jim have some marital problems as Jim struggles with keeping his position at his dream company and his job at Dunder Mifflin, Angela tries to deal with raising her baby and her many cats after her marriage fails because of  husband the Senator’s affair with Oscar who in turn runs for state senate, Dwight’s dream of becoming Regional Manager finally comes true, Erin becomes romantically involved with new employee Pete and then finally meets her parents, Kelly and Ryan reconcile and run away together at Dwight & Angela’s wedding; Nellie “adopts” Ryan’s abandoned newborn son and moves to “somewhere in Europe.” Kevin gets fired and buys a bar, Toby gets fired and moves to New York to write a novel, Creed gets arrested for various crimes committed in the 60’s, Darryl is now a success with his branch of Athleap in Austin where Pam & Jim decide to join him after “getting fired” from Dunder Mifflin.

Negative: I didn’t like the bulky disc case with the weirdly placed disc holders. The 4th disc has to slip under a clear lip for the 3rd disc to rest on top, which makes the placement awkward and cumbersome because you cannot remove the 4th disc without removing the 3rd. I would’ve preferred they place the discs in a flat stacked wallet card format to make it less boxy and they could’ve still kept the fold out art with the episode descriptions. For someone who gets a lot of DVDs, trust when I say compact is better. I would’ve liked some episode commentaries, especially on the season finale, but unfortunately there were none.

The positive: The blooper reel. The audition tapes with various celebrities including Seth Rogen, Adam Scott, Bob Odenkirk and John Cho. The almost seamless loops of character testimonials from the show during the menu screen. I caught myself getting sucked into watching the menu all the way through because they picked some really good clips.

I loved The Office. I think they ended on a solid note even without Steve Carrell; though I was glad he made an appearance on the final episode (spoiler alert). 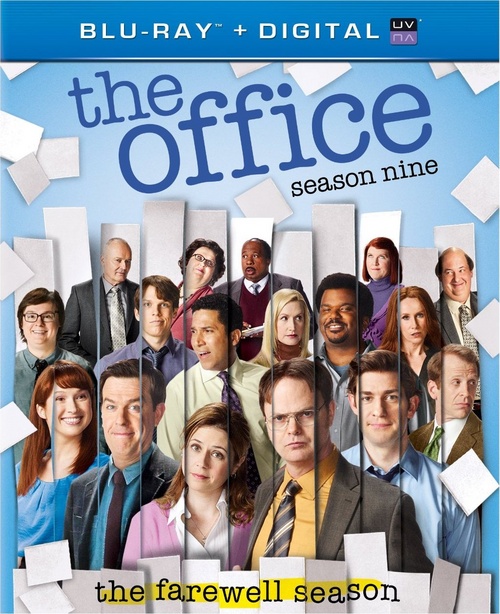