Who needs Terrence Malick when David Lowery is perfectly able to direct a movie that’s slow as molasses climbing up a tree in January? While much might be said for the way picture is shot, depicting a tiny town in Texas of the 1970’s that seems to have been frozen in history, the story is missing too many elements in Lowery’s attempt to be an original voice and to cut away from the kind of violence that might be expected in a picture about outlaws. We can see that Bob Muldoon (Casey Affleck) has a pile of money buried in some godforsaken place but do not see the bank(?) that he must have robbed to acquire the loot. We hear that Bob tried five times to break out of jail, succeeding the sixth, but forget about getting a looksee into how he did it. All this minimalism is in the service is focusing more closely on romance: on the star-crossed lovers Ruth (Rooney Mara) and Bob, and on the torment that lies under the emotional radar of not only Ruth and Bob but Patrick (Ben Foster), the town sheriff, who dedicates his time between his own passion for Ruth and his attempts to bring Bob to justice.

Bob and Ruth and one less fortunate fellow outlaw have been cornered by the law in a shack. When Ruth shoots one of the lawmen, Bob takes the blame, is sent to jail on a 25-to-life sentence, while Ruth is acquitted. The new baby that has come from their union provides Bob, on the run, with that much more motivation to get back to Ruth, to communicate with her by means other than handwritten letters. Ruth has to decide between Bob, whom she may never again see, and, ironically, the sheriff she hadshot years earlier and who has become like a dad to her little girl.

Bob is able to elude the law by contacts with a pair of friends, Skerritt (Keith Carradine) and Nate Parker (Sweeter), while other forces not too specifically defined are out to get Bob.

“Ain’t Them Bodies Saints” (the title taken from a song that is part of an ambitious soundtrack) could have been a mainstream movie had Lowery chose to make it so, but instead has allowed such blockbuster-style to rest on the cutting-room floor. So do not expect jailbreaks, robberies, and dramatic shootouts, as “Saints” is more interested in a period-style lensing and a look at emotions seething beneath the surfaces of the love triangle..

At a critics’ screening a week before the theatrical opening, a DVD was used resulting in a film that could have been shot in a December scene in Iceland. Dark, dark, dark, nor did it help that the screening room has a dismal sound system (not a happy thing considering the Texan accents), a relatively small screen, and a disc that thought of quitting several times but gave up after simply warning the audience of its intentions with a number of freeze frames. 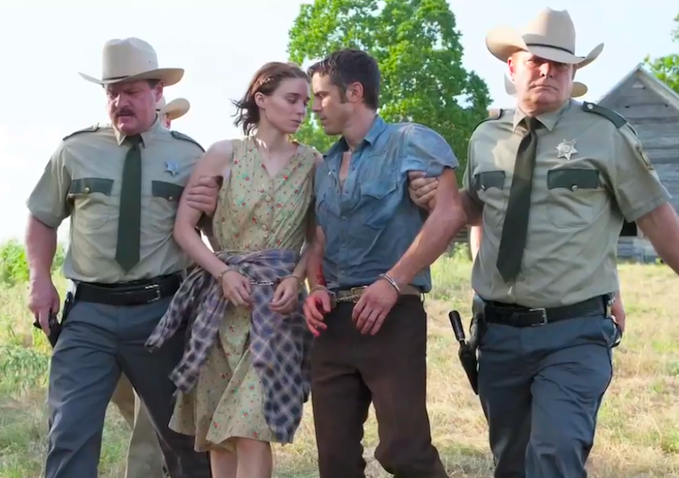