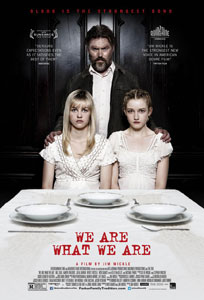 Jim Mickle and Nick Damici started carving out a place for themselves within the horror genre back in 2006 with their first feature collaboration, the zombie rat movie, “Mulberry Street,” then moved into the realm of vampires for 2010’s “Stake Land,” and now dabble in some cannibalism for their latest endeavor, a remake of the Mexican film, “We Are What We Are.”

Mickle and Damici’s rendition hones in on the Parkers, a family of five preserving a simple, quaint existence in their upstate New York home. However, when their mother unexpectedly passes, it falls on Rose and Iris (Julia Garner and Ambyr Childers) to maintain that lifestyle and it includes a vicious family tradition.

While Mickle and Damici both hold the same writing credit on the film, Mickle highlights the successful combination of their differing contributions during that process:

“If I’m looking at a script or an idea, it’s sort of like I’m already looking at what it’s gonna look like and what the editing pace is gonna be and what the music might be, and all that. I’m always thinking of sort of the outside, external stuff and I think the beauty of working with Nick is I think, you know, since he’s an actor, first and foremost, he’s able to look at every character with a sort of perspective I guess of where they’re coming from and what they’re motivated by.”

Even after going into production with a strong script and twice the budget they had on “Stake Land,” Mickle still found “We Are What We Are” to be the toughest film he’s ever shot:

“I would come home every night and just sort of have like a sense of panic about it, you know? I think a lot of it was because with ‘Stake Land’ and ‘Mulberry Street,’ because they were low budget, we could do a sort of more fluid style of shooting …. ‘Stake Land’ and ‘Mulberry Street,’ you guys could step in and out of focus and it actually gave it a nice aesthetic to that, and I think once you kind of commit to, we’re gonna be very precise, we’re gonna be very meticulous, you have to do that the whole time and so at some point it just becomes overwhelming to do that on a small budget.”

Overwhelmed or not, Mickle delivers some incredible visuals and one in particular stems from clever tactics developed by Brian Spears, the special effects artist. Mickle revealed the movie magic behind his autopsy scene:

“It’s Kassie [DePaiva] laying there. They painted her whole body so she was kind of pale and had veins and stuff, but then they put a chest plate on top of her where the ribs could open up and all that stuff in there, and then she just laid really still.”

The only drawback to that method is that Spears opted to simply run out and buy a liver to put into his chest plate, and when you’re shooting in a tight, hot space, there’s just so long you’ve got until that thing starts to stink.

Find out what sort of company that rotting liver attracted, hear Mickle and Damici’s thoughts on the potential rise of the cannibal subgenre, and catch what they had to say about Dexter himself, Michael C. Hall, inhabiting a different kind of killer in “Cold In July” in the full video interview below, and be sure to catch “We Are What We Are” when it arrives in theaters in New York and Los Angeles on September 27th.