“Captain Phillips” is the ultimate true tragedy-to-film adaptation. Rather than ride the “wow, this really happened” wave to an explosive finish, Paul Greengrass’ representation is so absorbing in and of itself, you won’t have an ounce of energy left for that until well after.

Tom Hanks is Richard Phillips, a cargo ship captain reporting to work for a new assignment, transporting a stock of relief supplies for Somalia, Uganda, and Kenya. While en route to Mombasa, the Maersk Alabama is boarded by four armed pirates determined to return home to Somalia with a sizable haul. With no cars or jewels, and little cash to give, it’s up to Phillips to keep the invaders from lashing out and harming his crew until, ultimately, he’s taken hostage himself.

When you’ve got a film that chronicles such a remarkable true story, it automatically gets a leg up. The material is intrinsically more profound because you know it’s the real deal. However, what makes “Captain Phillips” a standout in that sense is that the truth only comes into play before the film begins and after the credits roll because it functions as an all-consuming standalone piece. Then, once the material has sunk in, reconnecting with the idea that this series of events actually happened makes the whole experience all the more powerful.

Another highly impressive feature of “Captain Phillips” is that it steers clear of the good guy-bad guy set-up. It’s quite obvious that what the Somali pirates did was malicious and flat-out wrong, but they did have their reasons and Greengrass does a superb job slipping those motivations into Phillips’ narrative. The film opens with a peek at Phillips’ quaint and pleasant life with his wife, Andrea (Catherine Keener). From there, Greengrass jumps right into the ultimate juxtaposition by showing what life’s like for the pirates pre-attack, planting the seeds for an exceptionally thoughtful duel between Phillips and the captain of the pirates, Muse (Barkhad Abdi).

Once we move into the actual takeover, “Captain Phillips” functions as a highly entertaining disaster film of sorts. There’s a great deal of world and character building going on, but you won’t even realize how much information you’re absorbing because it’s all getting swept right up in the suspense. But then, when poor Phillips winds up stranded inside a tiny life boat with the four pirates and the fight becomes much more about words and mental stability, everything you’ve taken in comes rushing back, giving those moments an exceptional amount of depth.

On the technical front, Greengrass absolutely nails it in ever respect. The handheld, grainy visuals generate wildly visceral action sequences, an abundance of extreme wide shots ensure you’re constantly oriented, and then there’s a slew of close-ups that make it absolutely impossible not to be sucked right up by the stellar performances.

As expected, Hanks is the big winner. It should be tough to lose such a familiar face in a character, but here, Hanks has no trouble shedding his star power for the role in mere minutes. Hanks gives Phillips a commanding presence, making you believe he’s got a chance to outsmart the invaders, but also just the right amount of warmth to keep him vulnerable. There can’t really be spoilers for a film based on such a familiar true story, but to maintain a semblance of surprise, I’ll say Hanks’ work in the third act of film will hit you with a truckload of raw emotion and leave it at that.

Some of Phillips’ American comrades get stuck with a few tacky lines of dialogue and can feel quite stiff every now and then, but generally, they serve their purpose. The only characters that come anywhere near Hanks’ level are the Somali pirates. All three of Muse’s crewmembers manage to make an impression, but Abdi creates such a complex character that every time the group is on screen together he consumes your attention. He’s not out to hurt anybody, but he’s so hell-bent on appeasing his superiors and bringing back an adequate amount of loot that he’ll sink to a deplorable level to get the job done, making him a highly volatile and despicable character. However, at the very same time, Abdi drops these subtle reminders of Muse’s motivation and hints of weakness, and the combination actually packs the power to make you feel sorry for him.

“Captain Phillips” will leave you emotionally spent, but not in the way that’ll make you call it a one-and-done type of film. You get a very clear protagonist and antagonist, but both so far exceed those designations that it forces you to think, assess, and care all the way through. However, the film also comes with a slight high seas adventure sensation and that makes “Captain Phillips” a highly entertaining experience as well. 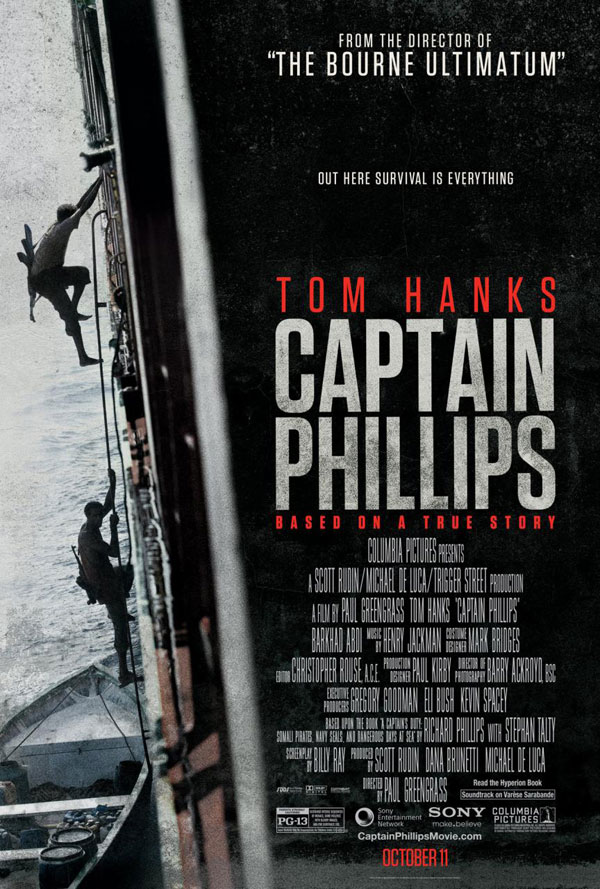