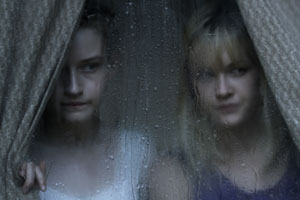 If you aren’t familiar with actress Julia Garner, it’s only a matter of time. You may have caught her in “Martha Marcy May Marlene” or “The Last Exorcism Part II,” but the must-see film that highlights her natural on-screen charisma and confirms that she’s a worthy talent on the rise is the March 2013 release, “Electrick Children.” And now, sure enough, Garner takes another major leap forward with her latest production, “We Are What We Are.”

Garner stars as Rose Parker, a teen living a quiet, reclusive life in upstate New York with her parents, older sister Iris (Ambyr Childers), and little brother Rory (Jack Gore). When Rose’s mother suddenly passes, it falls upon her and her sister to do what’s necessary to maintain their family’s existence – and that includes a cannibalistic ritual.

Even though there’s very little crossover between a cult member, a Mormon with a taste for rock music, and a family-oriented cannibal, Garner insists that there’s only one approach to playing each and every one of them:

“The key is, at the end of the day, no matter what, with all the research, I think the most important is just to focus on the situation that the character is going through, and to just think the thoughts of your character.”

With “We Are What We Are” in particular, the camp-like film set also facilitated quality work. Garner recalled:

“It was like summer camp, even though it had really hard scenes, dark scenes we had to do every single day. But otherwise, we had bon fires every night, we played softball like every Sunday.”

But of course, the cast and crew were also there to make a movie and when it came time to get down to business, Garner had no trouble putting all her trust in director Jim Mickle both as an actor’s director and as a person:

“The great thing about Jim is that he gives you freedom and he gives you space, but then at the same time, he will fix things that need to be fixed. And you completely trust Jim because he’s just such a great guy and you know that he’s a great director. Even from talking to him the first time, I knew. I just got that sense.”

You can catch Garner’s thoughts on those topics and loads more in the full video interview below, then go see “We Are What We Are” in theaters in New York and Los Angeles today so you can come back and watch the spoiler section of the conversation. After you’ve experienced the climax of the film, you’ll undoubtedly be hungry for more. (Pun intended.)