An ambitious, hook-laden work of both considerable anger and pain (“And there’s nothing wrong with me/This is how I’m supposed to be/In a land of make believe/That don’t believe in me”), punk outfit Green Day’s seventh studio album, rock opera “American Idiot,” arrived with a boom in the fall of 2004 — a survey of social anxiousness and a scathing rebuke to the Bush Administration’s frittering away of post-9/11 international goodwill. A critically embraced masterwork, it was also a commercial smash, going on to sell more than 15 million copies worldwide, and six million-plus in the United States alone. Still, despite both its success and its roots in the tradition of The Who’s “Tommy,” even the album’s most ardent fans would likely have been hard pressed to predict a triumphant translation to the Great White Way.

Documentary “Broadway Idiot” chronicles just that journey, though, and in doing so throws a warming, stirring light on the special catharsis of the collaborative creative process. A film about both challenges and choices, it works for fans of Green Day as well as those inherently more interested in the ins and outs of the theater world.

Full of rehearsal footage bolstered by interviews with frontman Billie Joe Armstrong and other key players, “Broadway Idiot” does a good job of tapping into the source material’s thick veins of feeling. Armstrong estimates 90 percent of the album was autobiographical, and talks about “Wake Me Up When September Ends,” widely construed as a song about 9/11, being rooted in the death of his father. But the film also isn’t skewed unreasonably toward celebrity. Tony Award-winning director Michael Mayer, musical supervisor Tom Kitt and choreographer Steven Hoggett — the three main architects of the stage adaptation — get equal time here, and relate both their nervousness in getting the material “right,” and devising tweaks appropriate to a live staging.

Director Doug Hamilton’s touch is straightforward and unobtrusive — almost to a fault, at times. Adhering to a painstakingly reconstructed chronological tack, he takes viewers through the inception of the stage adaptation and its rehearsals on to a Berkley, California, premiere, Green Day’s Grammy performance of “21 Guns” with the cast, the show’s Broadway bow and, eventually, Armstrong’s acting debut in the supporting role of St. Jimmy. There’s a more adventurous edit somewhere, but Hamilton doesn’t expand much effort trying to track it down. (For better or worse, though they’re glimpsed in footage throughout, the film doesn’t include interviews with either Armstrong’s wife, Adrienne, or band members Tre Cool and Mike Dirnt, who might have provided further perspective on the material and their thoughts on the radical re-imagining of some of the songs.)

Thankfully, between odd couple Armstrong and Mayer — great interviewees, each — “Broadway Idiot” has enough else going on to keep a viewer’s attention. Armstrong proves particularly thoughtful as to the nature of some of the skepticism he initially had in a stage adaptation of “American Idiot,” wondering about striking a balance between challenging viewers, many visiting from out of town, and playing to their desire to “see a fairytale.” (He also questions, in appropriately blue language, what Donald Trump is doing at the show’s Broadway opening night.) The interesting thing is that, for all his enormous success as a rock singer, the reception of “American Idiot” on stage helped validate Armstrong as a songwriter in ways he didn’t know he was missing. In candidly describing himself as blindsided by the depth of relationships forged with the cast and crew of the show, Armstrong reminds artists and audience members alike about the powerful nature of shared bonds.

NOTE: “Broadway Idiot” opens this week in New York City and across VOD platforms, and expands theatrically to other cities beginning next week. For more information, visit www.BroadwayIdiot.com. 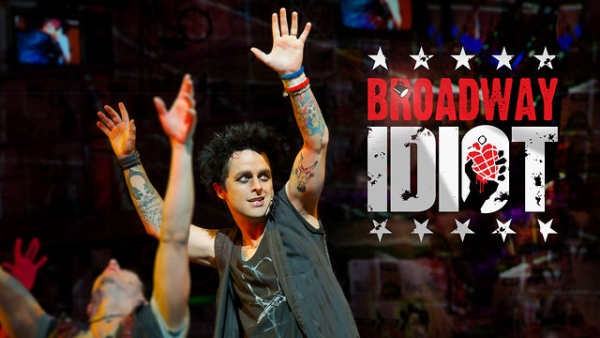