Special Features: Commentary by Writer/Director Nicolas Winding Refn; 8 Behind the Scenes segments; Director Interviews – Talking about Thailand with Mark Dininng and Discussing Genre Films with Bruno Kher; The Music of Only God Forgives with Cliff Martinez

Julian (Ryan Gosling) is an American fugitive living in Bangkok who is running a boxing club to front his drug business with his mother (Kristin Scott Thomas) and brother Billy (Tom Burke). When Billy rapes and murders a 15 year old prostitute, her father brutally exacts his revenge. Julian and Billy’s mother Crystal travels to Thailand to collect the body of her favored first born son and in a rage demands that Julian spill more blood. Julian must be cautious of Chang (Vithaya Pansringarm), a policeman who rules and delivers heavy punishment with a short sword.

The Negative: I think I’m one of the many people who saw this that just didn’t get it. In my opinion, it was as if the makers of Drive decided to pull a Hangover 2 and took a sequel to Thailand. Long stretches of silence and moodiness made this film sometimes agonizingly boring.  Per the director interviews in the special features section and the director commentary, there was actual written dialogue, but they decided to make their scenes silent because the actor’s English was too comical, so they were made into montages.

The positive: It plays out like a modern day silent film. The violence is sometimes implied which makes it more brutal. Kristin Scott Thomas was such a despicable character, but I loved watching her every scene.  The scene where she embarrasses Julian in front of his favorite prostitute posing as his girlfriend by praising Billy’s “enormous” penis and emasculating Julian; it was torturous to watch, but gives the viewer insight at what a terrible childhood Julian had to endure.  The score by Cliff Martinez is amazing; it’s close to a Vangelis sound. Some scenes were just haunting that will stay with you after the movie is over like when Chang goes to a brothel/Karaoke bar to torture the one who hired his would-be assassins and tells all of the prostitutes to close their eyes. They have to just sit there as it happens; it’s such a mindf—!

The special features includes 8 behind the scenes segments where I found the few that dealt with acquiring Chang’s sword and where director Refn and actor Pansringarm practice with the swords the most fun to watch.  Ryan Gosling doing a silent impersonation of director Refn also lightened the mood.

Only God Forgives is one of those love it or wish death upon it type of films.  I didn’t actually like it, just parts of it which were emotionally heavy. It’s deep without being pretentious, but again I don’t think I can appreciate it the way the few people who find it brilliant. 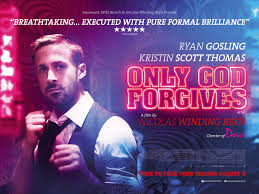