Trick ‘r Treat Back on the Big Screen October 28th!

Thanks to FEARnet, “Trick ‘r Treat” is the “Christmas Story” of Halloween. But even though FEARnet is about to roll into its third annual “Trick ‘r Treat” 24-hour Halloween marathon, there’s no harm in kicking off the tradition a little early, right?

On October 28th, “Trick ‘r Treat” is going big to close out Beyond Fest. Not only will the film return to the big screen at the Egyptian Theatre in Hollywood, but director Michael Dougherty and stars Dylan Baker, Leslie Bibb and Brian Cox will all be on hand for a Q&A following the screening. You don’t live in Los Angeles? Not to worry! The screening and the Q&A will also be live-streamed on Legendry’s Facebook page beginning at 7:30pm PST.

On top of that, in honor of the big event, Odd City Entertainment will release a limited edition James Fosdike “Trick ‘r Treat” print. Every fan at the screening will receive a poster and then, the next day, 100 numbered prints and 85 glow-in-the-dark variants will go on sale at the Odd City Entertainment store. Fosdike noted, “I wanted to put as much of the story as I could on the page, giving the image a comic-book touch with the background paneling, and adding a special frightening touch to Sam.”

Check out the design for yourself below and catch “Trick ‘r Treat” on the big screen on Monday, October 28th. 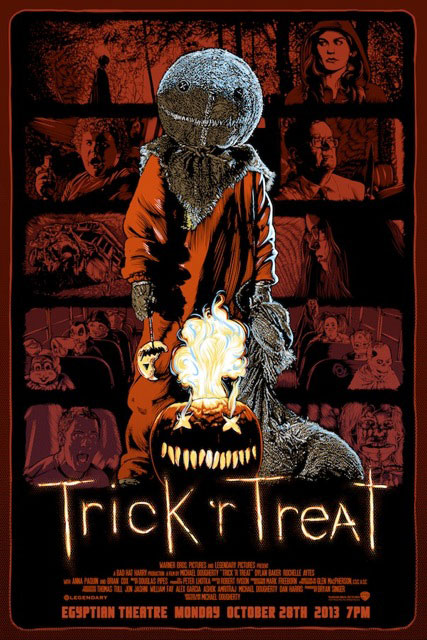