Anchorman 2: The Legend Continues Early with Superticket and Screening

viewers eagerly anticipating the release of the upcoming comedy, ‘Anchorman 2: The Legend Continues,’ will have the chance to see the film two days before its official American theatrical release, with the film’s newly announced superticket. Paramount Pictures, which is distributing the sequel to the cult 2004 comedy, ‘Anchorman: The Legend of Ron Burgundy,’ has teamed up with exclusive partners AMC Theaters and Fandango, to give fans the opportunity to see the film on December 18.

The ‘Anchorman 2: The Legend Continues’ superticket is being offered following the successful pilot program that was offered this past June for ‘World War Z.’ Paramount is now expanding the superticket offering, which will be available for purchase starting on Tuesday, November 26, to a nationwide audience. Fans who register at the ‘Anchorman’ superticket official website on the official on-sale date will be the first to hear the full details about the new offer from the legendary title character, Ron Burgundy.

Paramount Pictures has released the following official synopsis for ‘Anchorman 2: The Legend Continues’:

With the 70’s behind him, San Diego’s top rated newsman, Ron Burgundy (Will Ferrell), returns to the news desk in ‘Anchorman 2: The Legend Continues.’ Also back for more are Ron’s co-anchor and wife, Veronica Corningstone (Christina Applegate), weather man Brick Tamland (Steve Carell), man on the street reporter Brian Fantana (Paul Rudd) and sports guy Champ Kind (David Koechner)-All of whom won’t make it easy to stay classy…while taking New York and the nation’s first 24-hour news channel by storm. Produced by Judd Apatow, Will Ferrell and Adam McKay. Written by Will Ferrell and Adam McKay. Directed by Adam McKay. 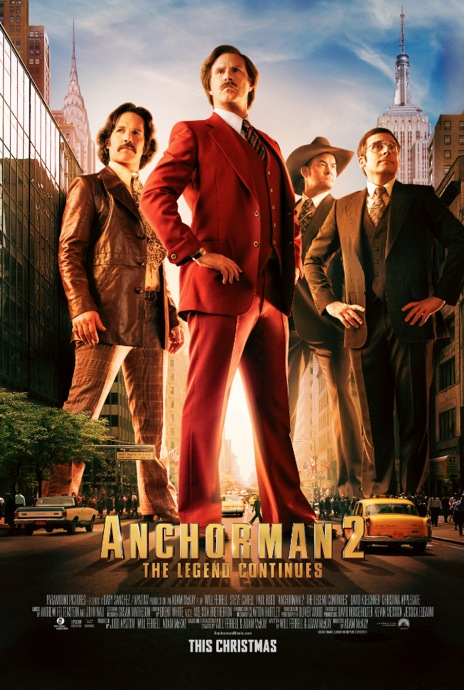