“The Book Thief” celebrates love and life in one sequence and takes it all away in the next, only to come back around to give your heart yet another bruising, but it always does so with purpose, making the film a well-earned flood of emotion.

After being put up for adoption, Liesel Meminger (Sophie Nélisse) is sent to live with Hans and Rosa Hubermann (Geoffrey Rush and Emily Watson) in a pre-war German town. Heartbroken over the passing of her brother and her mother’s abandonment, Liesel has difficulty adjusting to her new life until Hans discovers her passion for books and takes it upon himself to teach her to read. Liesel warms up to the Hubermanns and befriends her neighbor Rudy (Nico Liersch), but as the pressure of the Nazi regime bears down on the town, Liesel finds it increasingly difficult to fall in line, especially when the Hubermanns agree to care for the son (Ben Schnetzer) of a Jewish man who saved Hans’ life in the First World War.

Even though Markus Zusak’s book comes with a wealth of cinematic material, “The Book Thief” is a particularly challenging piece to adapt to film. The book takes place over a lengthy period of time during which Liesel begins as a child and winds up a young woman. Nélisse is the film’s one and only Liesel, but thanks to excellent hair, makeup and costume choices, the filmmakers successfully bring her from innocent, frightened girl to knowing young adult over the course of the film’s 127-minute running time.

The success of this transition also speaks to Nélisse’s talent. She’s got an undeniably absorbing on-screen presence. At the start of the film, Liesel is a girl of very few words, but Nélisse’s facial expressions and body language provide a firm understanding of how she’s feeling about her new life during each stage of the process. Ultimately, Liesel becomes a learned and outspoken character and both Nélisse and screenwriter Michael Petroni handle that transition beautifully. Liesel is driven by personal dreams and her huge heart, but she’s always well aware of the risk that comes with making certain decisions, so Nélisse’s ability to offer insight into that thought process is key to “The Book Thief’s” success.

Nélisse is the driving force of the film, but Rush, Watson and Liersch all offer stellar supporting performances that result in fully realized secondary characters, but also ones that are key to building Liesel. Similar to Liesel’s aging, the relationship between her and her foster parents is a delicate, extensive transition that works surprisingly well considering the truncated version of the story in the film. Hans is warm and lovable right from the start, but as the threat of war creeps closer and closer, his tenor changes. He’s always a source of warmth, but that actually winds up raising the stakes in “The Book Thief” because when Hans opts to use a firmer tone with Liesel, you know it’s for a good reason.

Watson’s character excels more so due to her extreme arc. Rosa is a tough-as-nails type, always bossing Liesel around and picking on Hans for not having a job. However, she is a loving person and cares for both of them dearly, so it’s a pleasure to see that side of her break through more and more as the family’s circumstances change.

Liersch is another young standout in the film. Just like Nélisse, he’s got your full attention every time he’s on screen. Rudy’s playfulness is infectious and considering “The Book Thief” involves some rather bleak circumstances, Rudy’s everlasting jubilance makes for a much-needed addition. However, that’s not to say Rudy is a one-note character. The impending war eventually hits home from him, too, and the fact that it chips away at his fun-loving demeanor is upsetting. Schnetzer’s Max, on the other hand, finds more success in helping reveal more about Liesel. Max is the Jewish son of a man who once saved Hans’ life and that’s really as far as the character goes. His effect on Liesel, however, is extensive and that alone makes him a worthy supporting character.

“The Book Thief” is loaded with picturesque visuals, John Williams’ score is rousing and, as it should, the narrative essentially uses your heart as a punching bag, but there are two elements in the film that do run the risk of taking a viewer out of the story. The first will only effect fans of the source material. In Zusak’s book, Death is the narrator. Even though Percival and Petroni make the best possible choice by relegating this narration to the very beginning and end of the film, Death’s presence is sorely missed. But, then again, it’s hard to imagine the filmmakers upping his presence without the narration becoming distracting. Then there’s the issue of the accents. As someone who knows little to nothing about accent accuracy, this has nothing to do with the authenticity of the cast’s German accents, but rather the fact that by speaking English with this German accent, it can dull the intonation of the dialogue and make moments feel wooden.

Those missteps aside, “The Book Thief” is a highly successful epic that will lift your spirits, break you down and then earn that emotional roller coaster by leaving you with something to think about well after the credits roll. 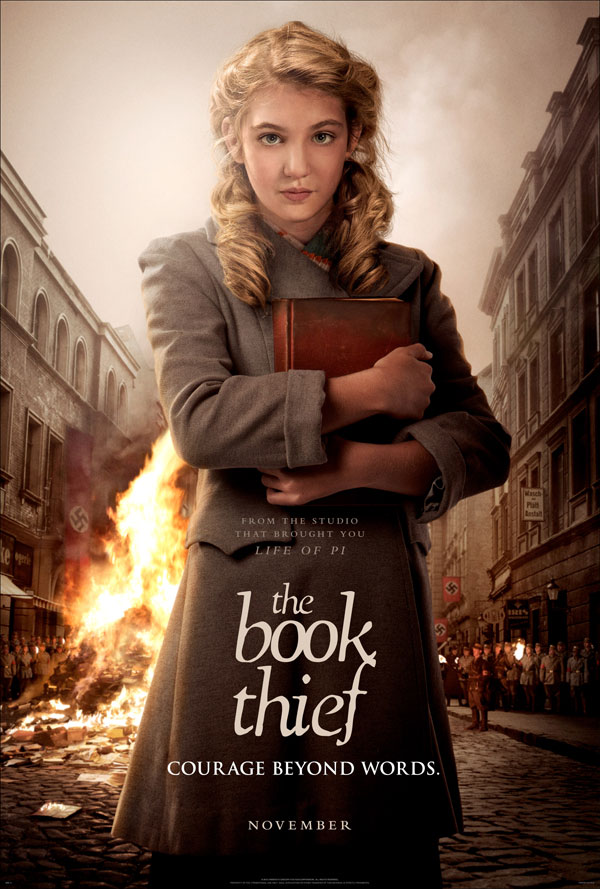