Lisa Gay Hamilton has had a successful career spanning stage, film and TV, and played more than her fair share of characters of authority — principals, attorneys and the like, including Rebecca Washington for 145 episodes of “The Practice” from 1997-2003. But on screen, at least, she hasn’t had a lead role, she says. That changes with the release this week of writer-director John Sayles’ “Go For Sisters,” a complex border drama about friendship, redemption and moral relativism.

Hamilton stars as Bernice Stokes, a no-nonsense Los Angeles parole officer whose path crosses with Fontayne Gamble (Yolanda Ross), an old high school friend. When her adult son goes missing, Bernice leans on her wayward friend’s connections, including a disgraced ex-cop (Edward James Olmos), to try to unravel a twisted web of human trafficking and other criminal enterprises, and find her son. For ShockYa, Brent Simon recently had a chance to talk to Hamilton one-on-one, about working with Sayles and firing a gun. The conversation is excerpted below:

ShockYa: This is the film, finally, where Lisa Gay Hamilton gets to pack some heat. Was this the first film in which you used a gun?

Lisa Gay Hamilton: {laughs} I think so, maybe. To my chagrin I did have to go to a firing range, and I was such a girlie girl. I did have to fire real bullets and I was like, “Oh my God, who wants to do this? I don’t understand!” I’m very much a girlie girl and it was interesting, because when I went to the firing range there was a young woman there with her boyfriend, and I was like, “Is this a date or something?” People came in with long-range rifles and stuff. I just found it wacky.

ShockYa: I know you’d worked with John Sayles previously on “Honeydripper,” and he’d also auditioned Yolanda (Ross) for the same film, for the role you ended up getting. And in talking with him, he said when he had the idea for this story — of two women separated by 20 years — that he knew the actors he wanted for the roles, which isn’t always the case when he’s writing. So when did he approach you about the project?

LGH: See, I literally didn’t know that until today. I auditioned for “Honeydripper,” and was honored to audition for him. I left there saying, “Well, if I don’t get that job, maybe that’ll make me remember me for another job.” So when I got “Honeydripper” I was so tickled. And then when my agent called and said John had another film he wanted me to be in, I thought it was just another couple scenes. …Yolanda and I both laugh about this because we got the script and were each like, “Our character’s on every page? Oh my God!” That in itself was tremendous, because I’d never really been asked to star in a film before — well, the summer before last by chance I’d also been (a lead) in a film, but no one may see that one either. The fact that he had me in his head… {pauses, re-directs} I’m always thinking, self-deprecatingly, that I was his fifth choice and he finally came to me. But to know that he really had me in mind, I can’t tell you how good that makes me feel, because what I have craved in my professional career is to be respected. And that’s a win for me, that’s a win.

ShockYa: One of the chords the film struck for me was the notion that there are people from high school or adolescence to whom we remain bonded. Everyone has a Fontayne, if you will — an acquaintance for whom maybe things haven’t worked out — and it’s not too much of a stretch of the imagination to envision reconnecting with someone like that in a moment of dark need for one of the parties. Did that part of the story rekindle any thought like that for you?

LGH: I think more the flip side of that — which is not so much that the person’s life goes in a different direction, but that even though time passed there was still that love and bond there. I can think of girlfriends that I keep up with from high school or college or grad school, phone friends, and we don’t see each other for years and yet if that person were to call and say that they needed help, you would help that person. That registered to me more than someone in my past. …I think the film is about love — the love between these two women never left, and probably even more on Fontayne’s part, because she had the most to lose. She risks the most, and for what reason (other than) she loves Bernice?

ShockYa: John frequently writes biographies for his characters, right? What was your experience like with that?

LGH: I had never had a director do that before, so when (on “Honeydripper”) he said, “I’ll be sending you a bio,” I thought, “Of what?” {laughs} But there’s something very efficient about that and quite wonderful, because this is a writer who really knows his characters and where they came from and who they are, why they are. He gives you a context for this being that you’re supposed to create, that he’s written on paper. It’s a skeleton — nothing that puts you in a box, but answers some very basic questions that you would answer anyway. Some stuff he leaves for you to fill in, but whatever you’re going to fill in only enhances what he’s already given you, it’s not to alter what he’s given you. I was taken aback the first time, but I get it. A lot of it has to do with efficiency too — he doesn’t have a lot of time, there’s no rehearsal and not a lot of discussion, and we have to go, we have to shoot. It’s actually pretty cool.

ShockYa: As far as the stuff you fill in, is he interested in actually knowing some of that as well, or does he just to see that as filtered through the characters?

LGH: There is some sharing, to the extent that I said to myself, “Well gee, I need to go find a parole officer and talk to that person and spend some time with that person.” So I brought that information back to John, and he was interested in it — like the vest (Bernice wears). The parole officer I met with wore a vest and I thought that was cool — no purse, everything she needed was in the pockets, and it was very efficient for her. It wasn’t standard. Some of the parole officers had on heels and skirt, which amazed me. But there was something about how she dressed that I loved — how she carried herself. I loved being on that journey with her for the day I spent with her, when she went on four different home visits. And it was tragic, painful and sad, what I saw. I really thought this woman was close to the character of Bernice in some respects, in that she wasn’t playing — she was business when she met with these people. {tapping the back of her hand into her palm} As she says, “I have two jobs — one is to protect public safety, property and human beings. And the other is to see if these people can be kept on the road to rehabilitation. Sadly, most will not. But I’m going to do as much as I can.”

ShockYa: The opening scene really is such an incisive description, of both character and occupation.

LGH: It’s just such a well written script — John really gives you the premise: hardcore parole officer, not fucking around, will nail you for something. And then life changes, and she needs a favor.

NOTE: In addition to its ongoing theatrical engagement in New York City, “Go For Sisters” opens in Los Angeles this week exclusively at the Landmark Nuart, where Hamilton will join Sayles for a couple special post-screening Q&A sessions. The film will expand nationally, via Variance Films, throughout November and December. 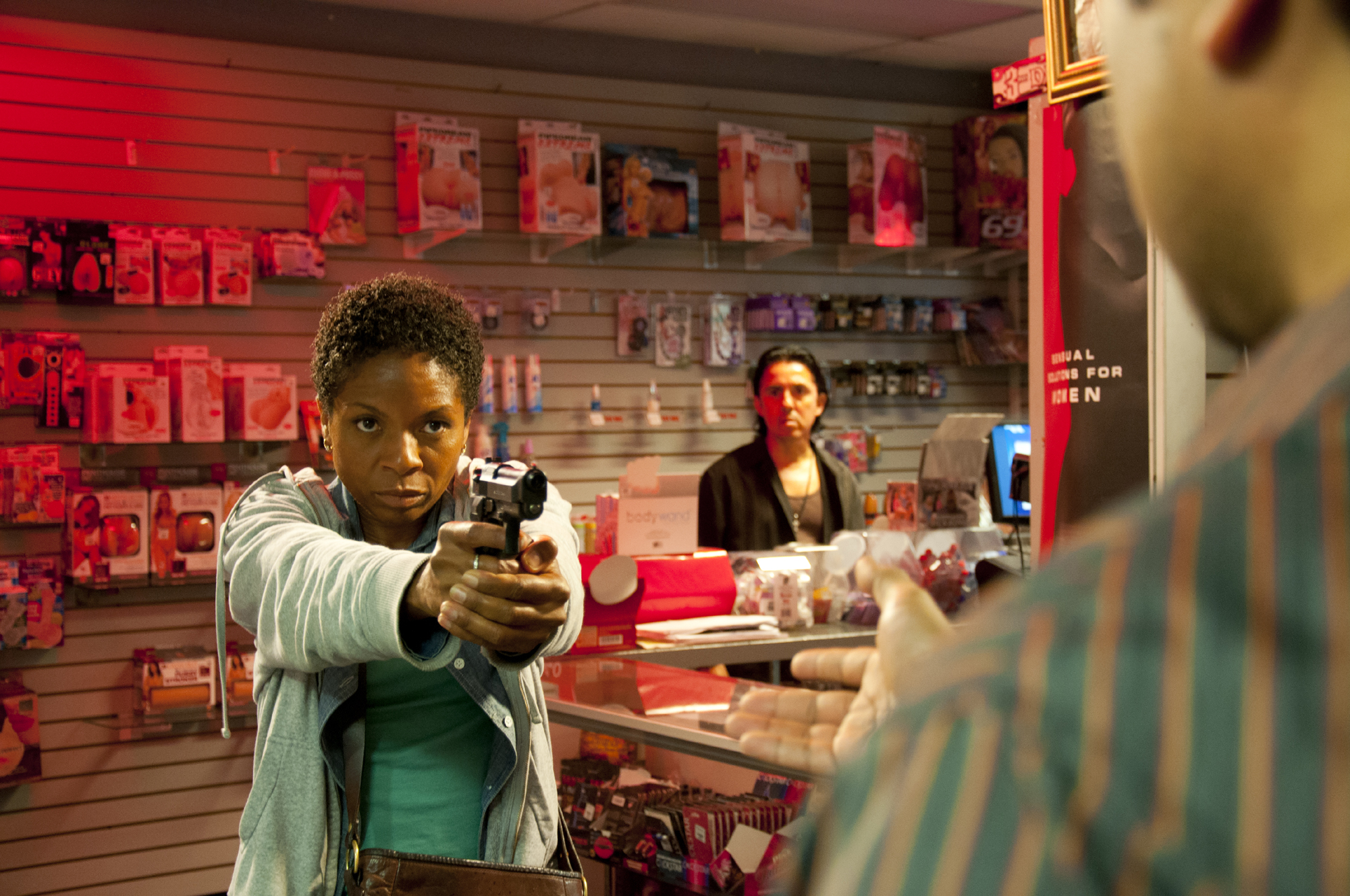