Better prepare yourself for many days’ worth of running around singing, “Let it go, let it go,” because there’s no way you’re walking out of “Frozen” without a pep in your step, massive smile on your face and the desire to build a snowman.

“Frozen” features the voices of Kristen Bell and Idina Menzel as Anna and Elsa, the princess of Arendelle. As kids, Anna and Elsa are inseparable. But, when Elsa realizes that she’s got the ability to create snow and ice, she also realizes that her newfound powers put her loved ones at risk. In an effort to keep Anna safe, Elsa takes off into the mountains, but buries a summertime Arendelle in a winter’s worth of elements along the way. Now, with the help of a mountain man named Kristoff (Jonathan Groff), his lovable and loyal reindeer Sven, and Olaf (Josh Gad), a snowman with a thing for summer, Anna must trek up the mountain and convince her sister to thaw their home.

Writer-directors Chris Buck and Jennifer Lee cracked “The Snow Queen.” Disney’s been trying to develop a big screen version of the Hans Christian Andersen story for quite some time and while “Frozen” is far from a straightforward adaptation of that work, the deviations are brilliant and turn the final feature into a piece that’s got a classical appeal, but also wholly relatable modern twists.

As someone with a younger sister, the fact that Anna and Elsa are sisters offered up instant access. Even though neither of us can flick a finger and conjure an ice castle, Anna and Elsa’s outrageous situation has a very realistic core. Having been exceedingly sheltered most of her life, Anna’s journey is much more about getting out into the world and simply trying to do the right thing, but Elsa’s predicament strikes a chord on a much deeper level. She’s got this power that she can use for good, but sometimes, inadvertently, she loses control and that forces her to choose, does she look past her village’s disapproval and “let it go” or does she submit to their concerns regarding her power and bottle it all up? Elsa’s arc ultimately boils down to a notably poignant representation of the all-too familiar concern of not being well liked.

“Frozen” also gets an intriguing additional layer from that fact that while Elsa and Anna are two totally different people with different goals, their arcs intertwine. Anna can’t grow up and save the day unless Elsa decides to embrace who she is and that creates an effective back-and-forth between the two that’s fun to track, giving “Frozen” some added momentum.

In the realm of supporting characters, clearly Olaf is the standout. Not only is he a well-deserved goldmine for Disney’s toy market, but he also floods the film with an incredible amount of heart. He isn’t just some creature that pops out of the woods one day to offer up a few laughs. Elsa creates Olaf as a result of the lasting effect of a childhood memory, so even though the girls aren’t seeing eye-to-eye at the moment, he’s a constant reminder that the warmth and love between the two still exists and is worth fighting for. Gad also deserves a great deal of credit for the success of the character because Olaf could easily have been “Frozen’s” Jar Jar Binks. He’s incredibly peppy, rocks a goofy look and a mildly grating voice, but between loads of exceptionally thoughtful dialogue and Gad’s pitch-perfect intonation, he turns Olaf into a character that’s not only a blast to watch, but one that’ll stick with you well after the credits roll.

There’s nothing wrong with Groff’s Kristoff, but Anna, Elsa and Olaf have such, big, bold and highly successful spirits that it’s just too tough to compete. Santino Fontana’s Hans, on the other hand, suffers quite a bit from one of “Frozen’s” few believability issues. In addition to getting her sister back, Anna is also out to find herself a man and it turns out, she’s so desperate to live happily ever after that she agrees to marry Hans the day she meets him. Thankfully the film doesn’t take the scenario too seriously and even pokes fun at it, but the plot point can still be tough to digest.

One other noticeable weakness are the film’s villains. De-vilifying the Snow Queen and turning Elsa into an accidental adversary is a stroke of genius, but that means “Frozen” still needs a full-fledged antagonist and rather than devoting that portion of the story to building a singular foe, Buck and Lee attempt to pit two characters against our heroes. Both are mildly effective, but had the filmmakers allotted one’s screen time to the other, that one could have made for a far stronger antagonistic force.

Regardless, “Frozen” is a film that calls for celebration – the celebration of life, happiness and embracing who you are – and the success of that lets it steamroll right over those two shortcomings. “Frozen” is a thrilling, heartwarming experience with highly likable leads and an incredibly catchy soundtrack. Spending time with these characters in this world is such an absolute blast that you won’t want the experience to end and if that’s the reason you leave the theater and go off to buy the soundtrack and an Olaf toy, Disney’s earned it. 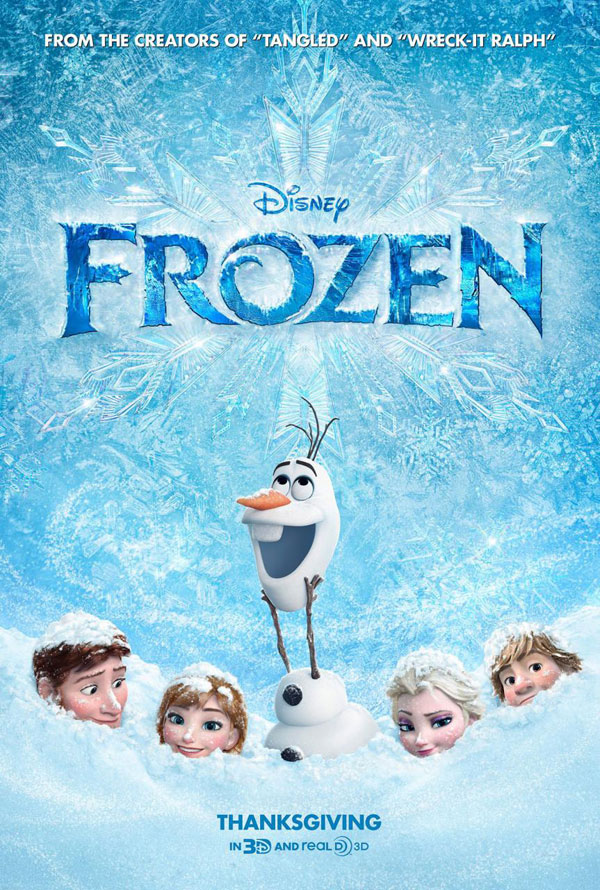