Exclusive: Bruno Barreto Talks Reaching For the Moon, and Listening To His Mother

Brazilian-born, Academy Award-nominated filmmaker Bruno Barreto has over the course of his career tackled everything from political thrillers to comedies and social dramas, but for his 19th feature film he had to look no further than his mother, who supplied the source material for “Reaching for the Moon,” and serves as one of its producers. Inspired by a nonfiction book by Carmen Lucia de Oliveira, the movie centers on American poet Elizabeth Bishop (Miranda Otto) and her tempestuous lesbian relationship throughout the 1950s with Brazilian Lota de Macedo Soares (Glória Pires), a renowned architect in her own right. For ShockYa, Brent Simon recently had a chance to speak one-on-one with the personable Barreto — who in person resembles an older Moby — about his movie, his leading lady, and battling the urge to make his subject more likeable. The conversation is excerpted below:

ShockYa: Your mother, who is a producer on the movie, secured rights to the book upon which the book is based, and first mentioned the project to you many years ago. Yet you had no interest. So you turned down your own mother?

Bruno Barreto: (laughs) She met Bishop and Lota very briefly in one social occasion in real life, and she was kind of fascinated by them. Then this book came out 10 years later and she optioned the rights and came to me and asked me to read it. I asked her what it was about, she told me, and then I told her I wasn’t interested. Then she took it to Hector Babenco, who directed “Kiss of the Spider Woman,” and he wasn’t interested either. It wasn’t until 2004, when my former wife (Amy Irving) did a monologue about Bishop and I saw it and loved it and knew that it was the same character, that I finally went to read the book to which my mother had optioned the rights. I liked it. And then I went to read [Bishop’s] poetry. And then it took me another four years to find the angle in the script — of why and how I wanted to tell this story, to talk about what? It was then that the theme of loss came (into focus), because for me this is a story about loss — it’s not a biopic, it’s not another film about a tortured artist. It’s a love story, about how the weak and dysfunctional Bishop gets stronger and stronger and how the strong Lota becomes weak because she doesn’t know how to deal with loss.

ShockYa: It’s true, because I think you only have one flashback in the movie, and you could have easily loaded it up with more to show the pain and despair of Bishop’s adolescence in greater detail.

BB: Right, but that wasn’t the point at all. It was tough, though. This is my 19th feature film, and this was the hardest one to find the right angle and really make it into a dramatic narrative.

ShockYa: I was struck by a line from Elizabeth in the film, when she tells Lota, “I already have a commitment: pessimism. Pessimism never lets you down.” Do you think she was serious, and if so how long did it take her to come to that realization, which is such an interesting summation of character?

BB: I love the way Miranda played Elizabeth, which is always hedging her bets a bit, to protect herself. And yet I think there’s a little tiny part of Bishop that also just said that because it sounds good, and she loves the turn of a phrase.

ShockYa: For so many films featuring a character who is an alcoholic, that’s the defining characteristic or trait of their personality. And of course being an alcoholic or addict, you can be functional and very successful in any avenue of life. This film didn’t make Elizabeth this rolling disaster, to the point where it takes over the film. In the research for the scripting process, how… did you come to view her alcoholism?

BB: I didn’t think her alcoholism was that important in her career or life, at least for the story I wanted to tell. It was there, but as you said I think she was a functioning alcoholic. Her mother was taken to an institution when she was five years old, and that enormously impacted her. And also (good friend and fellow poet) Robert Lowell had been institutionalized many times, and Lowell suffered from depression (throughout his life), so madness was very close to her. She was avoiding that at all costs. It was a great fear for her, that she could tip over, and that was (hand-in-hand with) her alcoholism.

ShockYa: Given that it took so long for the script to take the final shape you liked, what was the casting process like — was it equally arduous?

BB: Glória came with the project — she was attached for 17 years, since 1995, and I don’t think there was any other actress who could have played here, she was perfect. I was terrified of how difficult it is for so many actors to play in another language. She doesn’t speak English like I do. But I don’t know how to explain how she did it, she just nailed it. Many actresses who live here (in the States) and have been here for 20 years still can’t play a straight character in English — Sonia Braga is one of them, where there’s always that delay. The first time I saw Miranda on screen was “Human Nature,” the Michel Gondry movie, and she stuck in my mind. Then of course she went on to do “The Lord of the Rings” and “War of the Worlds.” But there was a very short amount of time between when we got the film greenlit and the deadline that we would lose Gloria. It was February 2012, and on August 3 we would lose her. She actually gave us one more day — it was Saturday, August 4, which I’ll never forget, because it was a nightmare and question every day as to whether we could that day. When I was working on the script, I had Emily Watson in mind but it didn’t work because of dates. And my next choice was Miranda. I’d preferred Miranda but because of this whole thing of foreign sales and all that bullshit… well, I wanted a character, an actress that wasn’t known and didn’t have any baggage playing Bishop. Because Bishop was unknown, and I loved that, it would be totally absurd to put an actress in the role that is more widely known. Invariably you know a little bit about their private life, and I hate that. Angelina Jolie is a very good actress, but when I go see a film that she’s in it takes me like a half-hour or more for the character to take over. It works against them, it works against the director, the writer, everybody — it’s awful. I wish we could go back to the Irving Thalberg era, where it was prohibited to know anything about their privates lives! I mean, Rock Hudson would never have been who he was if they knew about his private life. (laughs) Besides being a fan of Miranda’s work, I wanted an actor whose private life was unknown, so it was perfect. I did the dance with distributors a little bit and then sent the script to Miranda, who I wanted from the very beginning. And luckily Miranda loved it.

ShockYa: Did you talk at all about accents?

BB: I always thought it should not be an American actress, because Bishop was American, but in a way she wasn’t, do you know what I’m saying? She was always traveling the world, and there was something otherworldly about her. So from the very beginning I didn’t see an American actress playing her. But what I think is remarkable about Miranda’s performance is her fierce commitment to not make her nice, to not fall into the Hollywood trap of making her likeable. That’s something that even when you set out not to do, you can easily end up doing.

ShockYa: It’s a human instinct, sure.

BB: And yet Miranda didn’t do that. And even I was worried about that! Miranda and I had a little bit of friction about that. [Screenwriter Matthew Chapman and I] were caving and falling into that trap, having to battle that. But of course it’s not about liking a character in a movie, it’s about just being interested in them and what happens to them.

ShockYa: Wrapping up, what was the experience like of taking the film to the festival Berlin?

BB: Oh, it was a great experience. They don’t show it with German subtitles, but this very international movie of a different culture really connected with people. It was amazing. We were in a theater that’s the oldest in Berlin, and seats 1,600 people, and it was the runner-up for the audience award. 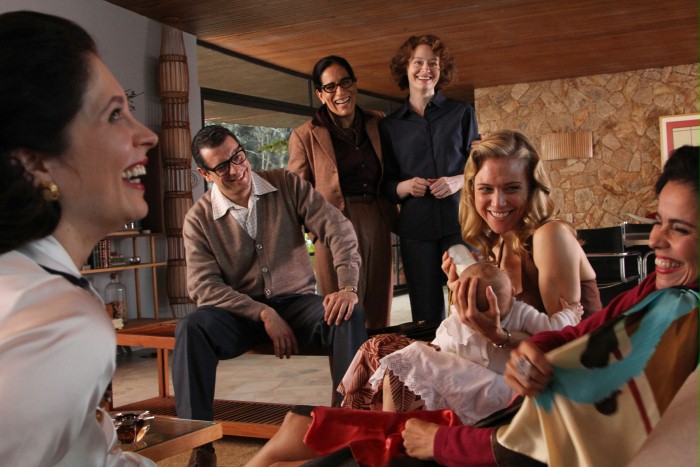