Catching Fire, the second installment of the Hunger Games series is out in theaters now. Katniss and Peeta find themselves facing down the arena once again on the 75th anniversary the games as unrest stirs in the Districts. The Director, Producer, and cast talk about the film and share their experiences, insights, and inspirations form both the books and movies.

What about the books films made you want to become involved?

DONALD SUTHERLAND: It was important for me personally that I somehow find my way to be part of this because it more clearly presents the dangers of an oligarchy of the privileged than anything I’ve seen for a long long time.

How did you ensure there was a consistency and unity to all the movies?

FRANCIS LAWRENCE: One of the things I wanted to make sure of was that there was still an esthetic unity to all of the movies and I thought Larry Dias did an amazing job with the world building and The Hunger Games so I wanted to make sure we stuck with the same production designer to make sure the Capitol was still built from the same architecture, that District 12 still had the same almost 1930’s Appalachia feel, and we’re going to do the same with Mockingjay. The fun thing though about Mockingjay is that we’re going to see a bunch of new districts. We get to see the Capitol in a very new way, more of the streets of the Capitol. That’s going to be really great!

In the film, Katniss is discovering the voice that’s been given to her and her ability to inspire and effect change. You guys are leading the voice now, you have an ability to reach people through your work, through your celebrity. What do you hope that you can accomplish with that platform right now?

JENNIFER LAWRENCE: ­­­­­There are so many great things that can be accomplished when you have a voice, saying the right things. It’s so easy to raise money for charity. It takes me ten minutes to sign a hundred posters that can raise thousands of dollars for charity, and that’s so simple. Honestly sometimes it surprises me. As an actor you don’t ever think or I­­­ hope you don’t think that, I don’t, “my job is very important. What I do is very important for people and the world!” I just love doing it. I remember being on the first movie and there was a girl who was an extra and she was covered in scars, she had been burned, and I remember her coming up to me and saying that she was too self-conscious to go to school when she was younger and when she read the Hunger Games and Catching Fire she felt proud of her scars and her friends called her the Girl on Fire and remember just crying and calling my mom, and I still can’t tell the story without tearing up. And I remember reading the third book where she goes to the hospital. Sometimes it can seem so pointless because you’re so filled with all the hair, and make up and clothes. And then sometimes the lives that you can touch, without even meaning to. So I don’t really have any plans, sometimes it comes up and bites me in the ass and it’s great I like doing it that way.

What did you love about your character the most?

JENA MALONE: I think I love every single thing about Johanna! I read the novels in 48hrs because I had my wisdom teeth out and I just laid in bed and ate a lot of ice-cream and just poured through them. The fact that these books were so well received in such a young audience was because they were hungry for it and that it’s sort of symbiotic relationship because you can’t create a good idea unless someone wanting to receive that good idea. They are looking for something else in the stories that are being sold to them. And they don’t want it sugarcoated any more. And the thing about Joanna Mason is that she doesn’t sugarcoat, and she is hard-core, and truthful, and violent, and angry and all of those things aren’t just cool aspects of her, I don’t think those are a badass thing, I think it’s a survival technique and I think that that’s a really interesting thing to talk about for young women to understand that can take on tools and personality traits that may not be their own but they can use them in forms of survival to be able to elevate themselves in the world. Which I think it pretty cool.

JOSH HUTCHERSON: Peeta is more angry in this movie, in the first one he was like the baker that painted and in this one he is a baker that paints, but he also has little bit of an edge to him. He’s angry about having to go back into the games, he’s angry about how Katniss has been with him and feeling like he’s kinda been let on.

Was there any point in directing the movie that you thought, this is going to be a nightmare, how am I going to bring this to life?

FRANCIS LAWRENCE: No that was kind of the fun part for me, figuring out the puzzle. I knew very early on about the arena and this was going to have to be a place that has to be figured out. It’s a place that doesn’t exist anywhere in the world. We were going to have to build part of it and shoot parts of it in different locations. We ended up building part of it in Atlanta in 40 degree water so the actors had to jump in and out of that. And then we did the jungle in Hawaii.

What were the toughest stunts to do? Was there a moment where you thought, “I can’t believe I’m doing this!”?

You have new voices with Golfoy as the screen writer and Francis as the director, so what were some of the considerations to maintain a continuity between the emotions and visuals?

NINA JACOBSON: The heart of these movies is Katniss’s point of view and as long as we remain firmly in her shoes I think that will always keep the consistency throughout because as a character she sis a complex character, she changes, she grounds us throughout the series. But I think this movie opened up a lot of new opportunities for us because we’re in the Capitol and The Arena which is itself the opponent instead of the characters being each other’s opponents. With Francis he was able to expand the world enormously while still staying very true to what was a character based emotionally honest approach that the first movie took.

JENNIFER LAWRENCE: Winning the Oscar is a gift that I’m so grateful for, and somewhat confused by slightly, but I’m ok with that. It’s a huge honor and I’m still pinching myself. I think I’m still haven’t full digested it and I think maybe I shouldn’t. It’s a tremendous honor. 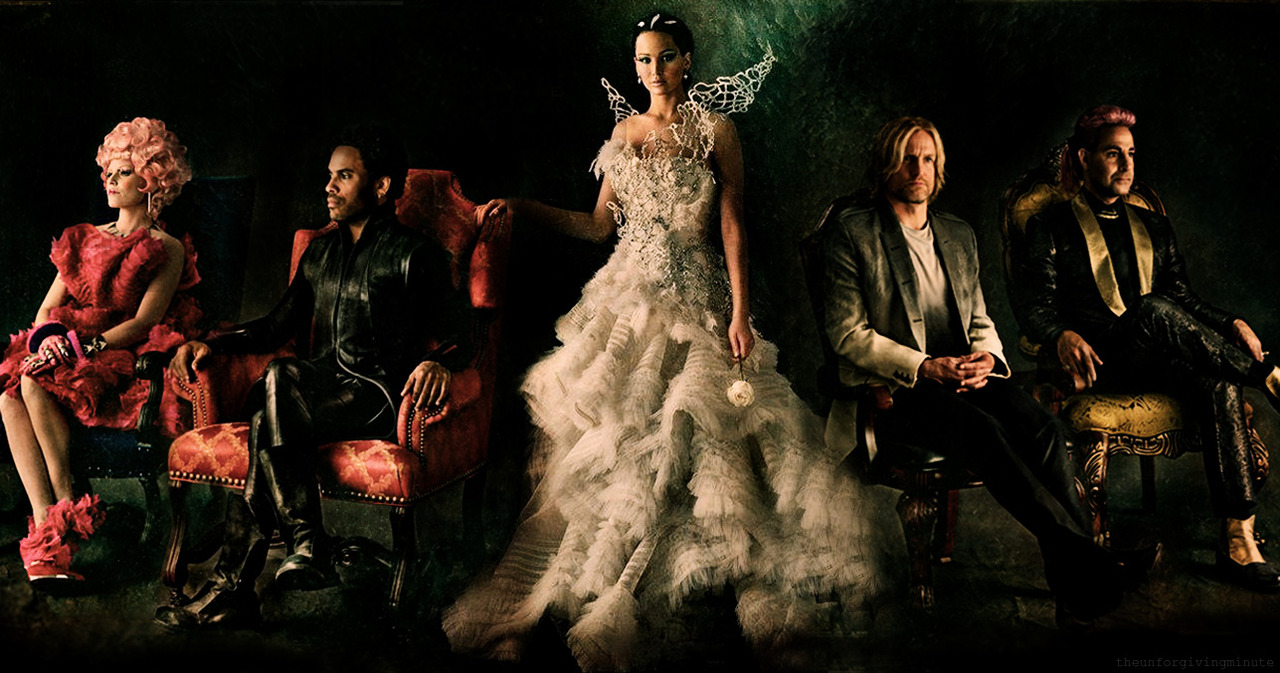